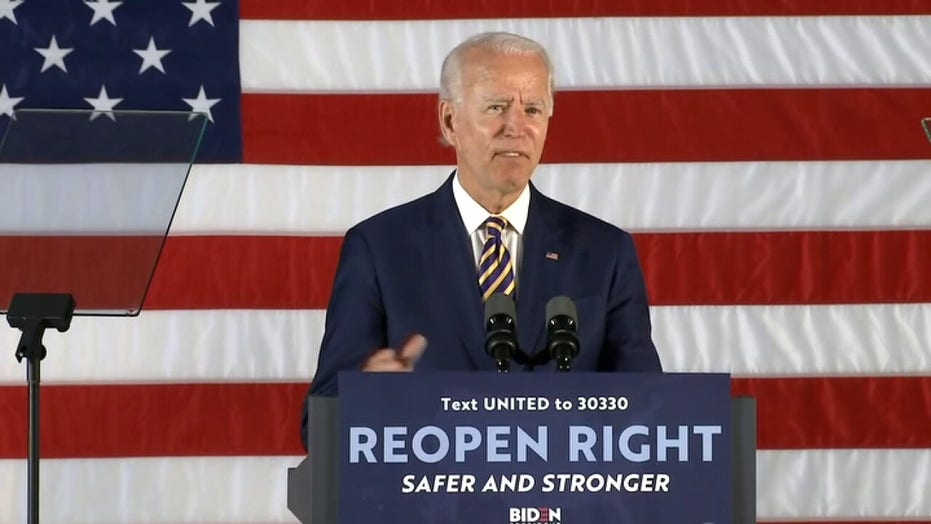 Joe Biden took aim at President Trump on Wednesday, charging that the president has “lost interest” in battling the coronavirus pandemic and accusing Trump of “surrendering the fight," urging him to "wake up."

In a scathing 20-minute speech delivered in suburban Philadelphia and carried live by all three major national cable news networks, the former vice president and presumptive Democratic nominee characterized Trump as a “dangerous” and “bungling” leader who has no clear plan for containing the coronavirus outbreak and for safely restarting the nation’s economy, which was mostly shuttered in March as the virus quickly spread across the country.

BIDEN FUNDRAISING SURGE: CAMPAIGN AND DNC HAUL IN NEARLY $81 MILLION IN MAY

With the death toll from the virus continuing to climb and spikes in new cases reported in many states as they begin to reopen, Biden argued that the president has “lost interest."

"He's once again ignoring the facts," Biden said. "The public health response is still woefully, woefully lacking from his administration. More than 117,000 people have died in the United States of America with an average daily number of cases still climbing in 21 states and we still don’t have what we need when it comes to rapid-results testing, contact tracing capacity, widely available personal protective equipment or clear nationwide guidance.” 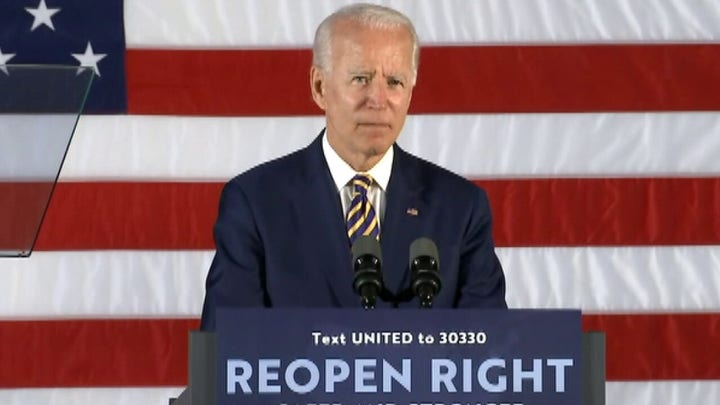 Accusing the president and his administration of “self-congratulating,” Biden argued that Trump “takes no responsibility, he exercises no leadership. Now [he's] just flat surrendering the fight instead of leading the charge to defeat the virus. He just basically waved the white flag and he's retreated.”

Biden’s speech at a municipal building in Darby, Pa. -- slightly less than an hour-long drive from the former vice president’s home in Wilmington, Delaware --  was his latest in a long line of attacks on the president’s handling of the coronavirus and the economic recovery. Biden met with four business owners at Carlette’s Hideaway, a restaurant in neighboring Yeadon, ahead of his address. After spending nearly two months working out of his home during the height of the pandemic, Biden has resumed holding small-scale in-person campaign events and speeches in recent weeks.

Firing back, Trump reelection campaign communications director Tim Murtaugh told Fox News: “After mostly hiding in his basement for nearly 80 days, Joe Biden has emerged to rehash his failed attacks on President Trump’s bipartisan Whole-of-America approach to combatting the Coronavirus. President Trump and the nation’s governors have partnered up in the greatest public and private sector mobilization effort since WWII, while Biden has done nothing but sit on the sidelines fearmongering and rooting against America’s success.”

Murtaugh also touted that “the 2.5 million jobs created in May -- the greatest single jobs month in American history -- is proof that the Great American Comeback is already underway.”

Biden acknowledged the vastly-better-than-expected May unemployment report and the dramatic surge last month in retail sales, calling it “great news for our country.” But he said that “Trump’s desire to declare victory and be done with it will only imperil our continued progress. Our economy is still sputtering, with more than 20 million people unemployed and no clear guidance from the federal government for what businesses need to do to re-open safely and effectively for a strong recovery.”

But Biden -- standing in front of an American flag and behind a podium that said “Reopen right. Safer and Stronger” -- urged the president not to “leave the American people to face this threat on their own with no guidance, resources or leadership from the federal government.”

And he stressed that “Americans need a president who put the American people first, not his or her own ego. America needs a president who will do the work” and he called on Trump to “wake up. Get to work.”

Wednesday’s trip was Biden’s third to the Philadelphia region in the past three weeks. Pennsylvania is considered a crucial general election battleground state in November’s general election. The state was carried by Democratic presidential candidates for a quarter-century until then-GOP presidential nominee Trump narrowly carried the state in 2016.

But the most recent polls in the state where Biden was born give the former vice president a slight edge over the Republican incumbent in the White House.