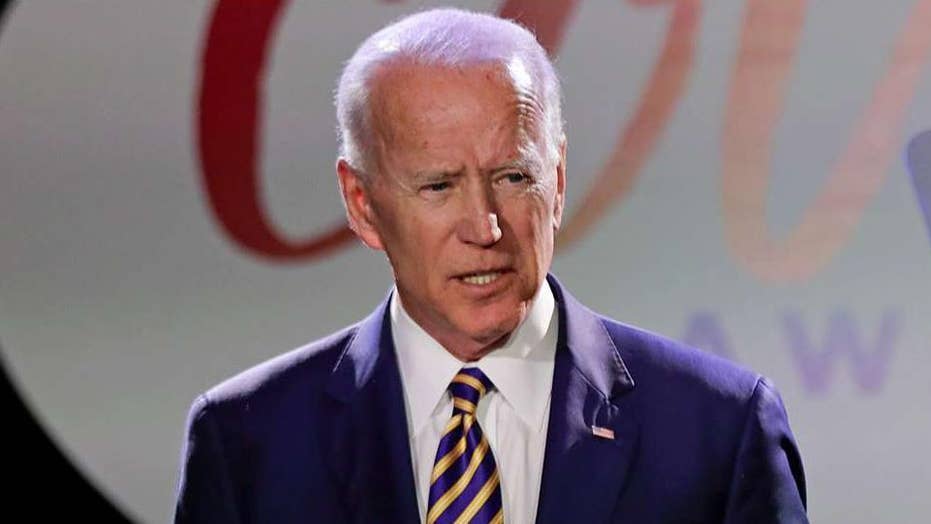 On the roster: Biden to take the plunge on Wednesday - Voter intensity through the roof - Mueller report spares Trump, but leaves a mark - Committed to life

BIDEN TO TAKE THE PLUNGE ON WEDNESDAY
AP: “Former Vice President Joe Biden is expected to announce he’s running for president next week. That's according to three people with knowledge of Biden's plans. Biden, a native of Scranton, will enter the race as a Democratic front-runner, although the 76-year-old faces questions about his age and whether his more moderate record fits with a party that has become more liberal. The announcement is expected as early as Wednesday and would cap months of deliberation over his political future.”

Cultivates his union roots - Politico: “Joe Biden said on Thursday that it was time to ‘take back’ the country and treat the middle class with respect, as the former vice president warms up for a likely 2020 presidential run. ‘I’m getting so sick and tired of the way everybody’s being treated,’ Biden told a crowd of striking union workers here. ‘We will take back this country. … I mean it. Don’t give up. Keep it going.’ Biden made the remarks at a union rally in Boston’s Dorchester neighborhood, where some of the 31,000 union workers for the New England-based Stop & Shop supermarket chain walked off the job last week after contract negotiations fell apart. He laid out a vision for ‘decent health care,’ a ‘fair wage’ and retirement during his 10-minute speech in the rain. The appearance was Biden’s latest trip to fire up pro-union Democrats.”

VOTER INTENSITY THROUGH THE ROOF
Fox News: “More than three-quarters of voters are already interested in the 2020 presidential election, including over half, 52 percent, who are ‘extremely’ interested, according to the latest Fox News Poll. That matches interest levels typically seen only in the last weeks before Election Day. The enthusiasm is on both sides. Fifty-seven percent of voters who supported Hillary Clinton in 2016 are ‘extremely’ interested in the upcoming election, as are 57 percent of Donald Trump voters, and two-thirds of self-identified ‘very conservatives’ (67 percent) and ‘very liberals’ (65 percent). Democratic primary voters are upbeat about many of their options. Nearly 8 in 10 would be satisfied with Joe Biden (78 percent) or Bernie Sanders (75 percent) winning the nomination, while 6 in 10 would be happy with Kamala Harris or Elizabeth Warren (each 61 percent). … Still, there is room for opinions to change for these candidates, as at least 3 in 10 primary voters don’t know enough about each to have an opinion.”

Reparations for descendants of slaves emerges as litmus test - Elle: “With the 2020 presidential election entering full swing, one topic is emerging as a new litmus test for candidates: whether they support reparations, or the concept of providing restitution to descendants of American slaves, partially as a way to account for the current wealth gaps that exist as a direct result of slavery and systemic discrimination. … While the subject has not been popular among candidates in the past (both Barack Obama and Hillary Clinton refrained from endorsing reparations), it's become a common question asked of the 2020 prospects. And many (including Kamala Harris, John Hickenlooper, Elizabeth Warren, Bernie Sanders, Kirsten Gillibrand, Tulsi Gabbard, and Beto O'Rourke) have voiced their support for a recent House bill from Rep. Sheila Jackson Lee that would form a commission to ‘study the impact of slavery and continuing discrimination against African-Americans, resulting directly and indirectly from slavery to segregation to the desegregation process and the present day…’”

Dems divided over ethics of fundraising - The Atlantic: “The 2020 race for the White House will undoubtedly be a battle both of ideology and personality. But it is also shaping up as a clash of two opposing forces: the ever-expanding, $1 billion industry that is a modern presidential campaign, and the Democratic Party’s move away from the top-down approach to fundraising that has fueled American politics for decades. So far, the progressive push toward campaign-finance purity is winning, and that’s worrying Democrats who believe the party literally can’t afford to leave money on the table if it wants to defeat President Donald Trump next year. The three most prolific fundraisers in the sprawling Democratic presidential primary field—Senators Bernie Sanders and Kamala Harris and former Representative Beto O’Rourke—hauled in just under $40 million total in the first quarter of 2019. That was enough to easily surpass the $30 million that the Trump campaign added to its coffers.”

Warren builds big staff - WGBH: “Elizabeth Warren has been on a hiring spree. In the three months since launching her presidential campaign fresh with the new year, the Massachusetts senator has put 160 people onto her payroll — nearly two a day through the end of March. That puts her well ahead of her rivals in staffing. It's an advantage that also brings challenges. Some personnel came over from her Senate and political operations, including campaign manager Roger Lau, chief of staff Dan Geldon, senior advisor for planning Kaaren Hinck, communications director Kristen Orthman, and digital director Lauren Miller. Warren has added plenty of new faces as wel[l]. … But that’s just the top levels. What separates her from other presidential candidates in the crowded 2020 Democratic field are the dozens of organizers, researchers, designers, media professionals, and operations aides she’s already put on staff.”

THE RULEBOOK: GOOD FRUITS
“I believe it may be laid down as a general rule that their confidence in and obedience to a government will commonly be proportioned to the goodness or badness of its administration.” –  Alexander Hamilton, Federalist No. 27

TIME OUT: SOME BEEF WITH FAKE BEEF
Eater: “It happened slowly, and then all at once. First came White Castle’s Impossible slider, which Eater NY’s Ryan Sutton hailed as ‘one of America’s best fast-food burgers’ in 2018. That slider just happened to be meatless, containing an Impossible Foods-branded patty made from soy protein, potato protein, coconut oil, sunflower oil, and heme, the ingredient that gives the burger the taste, aroma, and ‘bleed’ of a juicy beef patty. Then, the floodgates opened: In January, Carl’s Jr. became the largest American fast-food chain to offer plant-based patties made by Beyond Meat in 1,100 locations nationwide; just a few months later, Burger King, Del Taco, and the fast-casual chain Qdoba have followed suit with fake-meat offerings of their own, from Whoppers to tacos to burrito bowls. But conspicuously missing from the growing list of fast-food chains offering plant-based ‘meats’ produced by brands like Impossible Foods and Beyond Meat is McDonald’s, the biggest quick-service chain in the U.S.”

MUELLER REPORT SPARES TRUMP, BUT LEAVES A MARK
NYT: “Although the resulting two-year investigation ended without charges against Mr. Trump, [Special Counsel Robert Mueller’s] report painted a damning portrait of a White House dominated by a president desperate to thwart the inquiry only to be restrained by aides equally desperate to thwart his orders. The White House that emerges from more than 400 pages of Mr. Mueller’s report is a hotbed of conflict infused by a culture of dishonesty — defined by a president who lies to the public and his own staff, then tries to get his aides to lie for him. Mr. Trump repeatedly threatened to fire lieutenants who did not carry out his wishes while they repeatedly threatened to resign rather than cross lines of propriety or law.”

Dems vow to ‘hold Trump accountable’ - ABC News: “Within minutes of the release of special counsel Robert Mueller's redacted report, House Judiciary Chairman Jerry Nadler announced he would subpoena the Justice Department for a full, unredacted version even as Republicans celebrated the findings of the special counsel and urged Democrats to ‘move on’ from the Russia investigation. ‘We clearly can't believe what Attorney General Barr tells us,’ Nadler, D-N.Y., told reporters at a news conference in New York City Thursday afternoon. ‘The special counsel made clear that he did not exonerate the president and the responsibility now falls to Congress to hold the president accountable for his actions.’ When asked if Congress holding President Donald Trump ‘accountable’ means impeachment, Nadler said ‘that is one possibility’ as he believes the report ‘was probably written with the intent of providing Congress a road map,’ but he added ‘it’s too early to reach those conclusions.’”

But Republicans say ‘game over’ - Politico: “Republicans have one message following the conclusion of Robert Mueller’s probe: Move on. With no criminal charges against the president, many GOP lawmakers on Thursday gleefully watched Attorney General William Barr repeat their oft-repeated lines of ‘no collusion’ to a national audience. Even before the formal release of Mueller’s 400-page report — which contained damaging information about President Donald Trump — congressional Republicans celebrated the end to a nearly two-year investigation that has hung like a dark cloud over Trump’s presidency. And they’re ready to turn it into the first day of their 2020 election. A picture tweeted out by Trump, set to a ‘Game of Thrones’ style backdrop, summed it up: ‘Game over.’”

Jonathan Swan: ‘The other Don: McGahn is one of the Mueller report's biggest stars’ - Axios

Chicago Tribune: ‘What you thought of Trump before is likely your opinion now’ - ChiTrib

David Brooks: ‘What the Mueller report says about our world’ - NYT

AUDIBLE: REPLACE CARTRIDGE
“Today is a good day to sell toner for printers” – Dana Perino tweeted Thursday morning before the release of the redacted Mueller report.

COMMITTED TO LIFE
KATU: “A World War II veteran and former pastor celebrated his 98th birthday on Wednesday with a community of friends he found while working out regularly at a gym in Gladstone. Even at 98 years old, Fred Lawrence hits the gym three days a week. ‘It makes me feel good, like I’m strengthening what’s here,’ the retired Marine said. Fred is a WWII veteran, who survived three tours of duty and went on to be a pastor. ‘I’m so grateful to be alive, in this day, that I was committed to live. The good Lord is good, I just feel like he was with me. I’m so grateful,’ Fred tells KATU.”

AND NOW, A WORD FROM CHARLES…
“History is tragic, not redemptive. Our holiday from history ended in fire, giving birth to a post-9/11 decade of turbulence and disorientation as we were faced with the unexpected resurgence of radical eschatological evil.” – Charles Krauthammer (1950-2018) writing in the Washington Post on Dec. 18, 2009.

Chris Stirewalt is the politics editor for Fox News. Liz Friden contributed to this report. Want FOX News Halftime Report in your inbox every day? Sign up here.