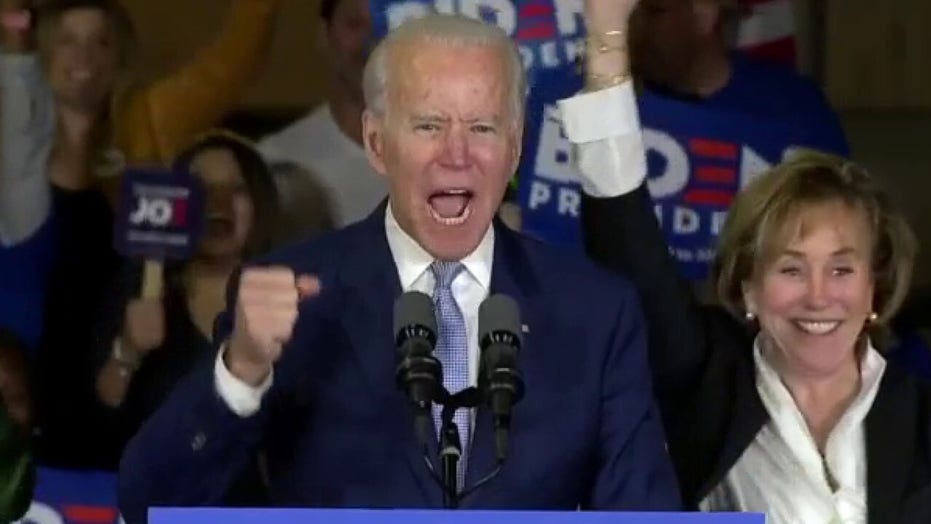 Joe Biden: They don't call it Super Tuesday for nothing

An enthusiastic Joe Biden – giddy after sweeping the South and winning at least eight of the 14 states holding primaries on Super Tuesday – declared his White House bid was “taking off” and suggested “it may be over” for Democratic presidential nomination rival Sen. Bernie Sanders.

"To those who’ve been knocked down, counted out, left behind, this is your campaign," Biden told supporters. "Just a few days ago the press and the pundits had declared the campaign dead.”

"To those who’ve been knocked down, counted out, left behind, this is your campaign. Just a few days ago the press and the pundits had declared the campaign dead.”

Biden, once the unrivaled front-runner for the nomination, was wounded after a lackluster fourth-place finish in Iowa’s caucuses and a disappointing fifth-place showing in New Hampshire’s primary. But a slight rebound in Nevada’s caucuses – where he came in a distant second to Sanders – was followed this past weekend with a landslide victory in the South Carolina primary.

"Then came South Carolina and they had something to say about it," Biden told the crows. "And we were told when it got to Super Tuesday it would be over.

“Well, it may be over for the other guy," Biden added, pointing at Sanders, the populist self-described democratic socialist from Vermont.

"We were told when it got to Super Tuesday it would be over. Well, it may be over for the other guy."

Biden’s goal going into Super Tuesday – where one-third of all Democratic convention nominating delegates were up for grabs – was to stay close to Sanders in the delegate hunt and cement his status as the moderate alternative to the progressive senator.

On Tuesday morning Biden’s campaign went up with a TV ad in Minnesota using clips of Klobuchar’s Monday night endorsement of him.

Biden ended up winning the state and gave his one-time rival a shout-out.

“I was so proud yesterday, being embraced by Amy Klobuchar," he said. "We won Minnesota because of Amy Klobuchar.”

While Sanders – in his speech minutes earlier – repeatedly battered Biden over his record – Biden took only a few jabs in return. One target was Sanders' repeated calls for a political "revolution."

"People are talking about a revolution," Biden said. "We started a movement. We’ve increased turnout. The turnout turned out for us.”

Biden also ribbed Sanders for being an independent rather than a declared Democrat.

"If you want a nominee who’s a Democrat, a lifelong Democrat, a proud Democrat, an Obama-Biden Democrat -- join us,” Biden said.

On Sunday, protesters with “Let Dairy Die” signs were also tossed from a Sanders event.