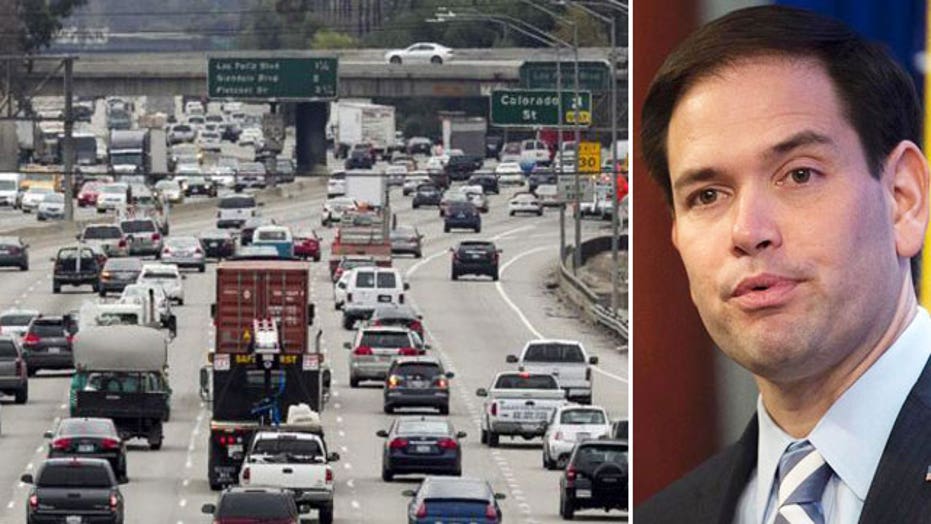 Paper goes after Marco Rubio's record as a driver

The New York Times was being accused of a hit-and-run Friday after swerving at Sen. Marco Rubio with a detailed exposé of sorts -- on his family's traffic violations.

The nearly 700-word article, accompanied by 10 pages of court documents, detailed how the Republican presidential candidate and his wife have been cited 17 times for traffic infractions -- everything from speeding to careless driving.

"Senator Marco Rubio has been in a hurry to get to the top," the newspaper quipped. "... But politics is not the only area where Mr. Rubio, a Republican from Florida, has an affinity for the fast track."

Beneath the eye-catching headline and opening, however, the Times clarified that most of those tickets were for his wife Jeanette. The records dating back to 1997 showed Rubio himself only got four.

The Rubio campaign, however, quickly turned the story into a fundraising opportunity.

"If the press is going to park its attention on silly stories like this one, we have to pass them and talk directly to voters" said a statement from campaign headquarters that then offered a link to click on for donations "to help Marco get this message straight to voters."

The report was widely mocked by fellow Republicans on social media Friday, as the Rubio campaign offered a brief statement from his traffic attorney Alex Hanna in response.

"Senator Rubio's license has always been in good standing. This matter was resolved by the court system and at no point was the license suspended by the D.M.V.," Hanna said.

The Times reporters' names did not show up on those docket records, according to the Free Beacon.

Politico, though, reported that The New York Times denied the claim, with the newspaper saying they "came across this on our own."

"We hired a document retrieval service in Florida and got copies of the paper records ourselves," Times Washington bureau chief Carolyn Ryan told Politico. A Times representative confirmed the statement to FoxNews.com.

The article itself provided a detailed history of the Rubios' traffic stops. "On four separate occasions they agreed to attend remedial driving school after a violation," the Times reported.

Rubio's wife, meanwhile, reportedly was stopped in 2010 for driving 23 m.p.h. in a 15 m.ph. school zone -- and fined $185, for driving eight miles over the speed limit. Hanna apparently helped get some citations dismissed in recent years.

This rich history of the Rubios' driving troubles provided a springboard for an avalanche of snarky tweets and blogs Friday afternoon.

The Media Research Center's Tim Graham mocked the Times' "scoop," saying they made those four tickets sound "quite serious."

"So we've already reached the bottom of the oppo barrel, have we?" Republican strategist Rick Wilson tweeted.

Here's some more, from some in the media: