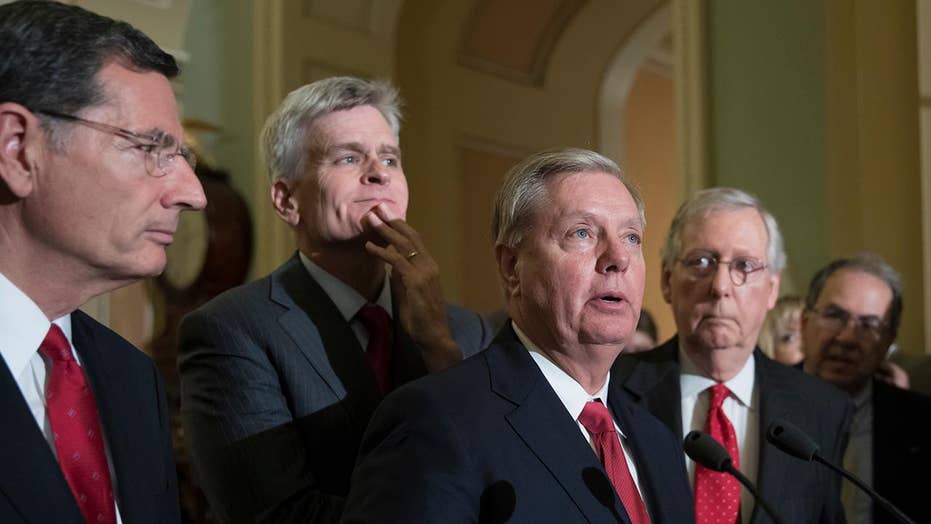 Senate Republicans will not vote on Graham-Cassidy bill

NBC News’ website has a splashy, homepage headline, “Obamacare Repeal Failed, but the Damage is Already Done.” But there is one small problem with the article – it  tries to blame Republican lawmakers for the failures of President Obama’s law.

The lead of the story, written by Benjy Sarlin, makes the assumption that the repeal debate has damaged the insurance market, which was already spiraling under ObamaCare. In fact, premiums were already rising before Republicans took control of the House and the Senate last January.

“Graham-Cassidy is officially over for now after Senate leaders announced they would not bring it up for a vote. But the damage to the health insurance market from the lengthy repeal debate is done — with higher premiums and fewer choices already baked into ObamaCare’s 2018 exchanges,” Sarlin wrote. “Now Republican leaders and President Donald Trump have to decide what to do about it.”

But ObamaCare was in trouble long before the GOP attempted to repeal it – which is exactly why they wanted to repeal it. The BBC published a list of ObamaCare’s flaws in July, noting that premiums are to rise by an average of 25 percent in 2017.

“This increase was predicted at the start of the law, and government subsidies to help pay for insurance will also increase. But those who should be covered by the Medicaid expansion aren't eligible for those subsidies,” the BBC News report stated.

Health insurance website eHealth estimate premiums have risen 99 percent between 2013 and the first months of 2017 for people who don’t get the government subsidies.

“ObamaCare was designed to fail, something NBC doesn’t seem willing to admit,” Media Research Center vice president Dan Gainor told Fox News. “Notice this is conveniently when the president it is named for is out of office. The higher costs for consumers are not a bug, they're a feature. Yet, the NBC story talks about higher costs for consumers and expects Republicans to fix it and never lays the blame on who caused the problem -- Obama and the Democrats who rammed this awful program through with zero Republican support.”

NBC News’ Sarlin doubled down on Twitter, linking to the story and writing, “Republicans didn't repeal Obamacare, but they made sure its premiums will be much higher in 2018. So there's that.”

However, ObamaCare premiums were already jumping and insurers were dropping out of the exchanges due to the damaging costs of participation. Republicans, in their opinion, were trying to fix the situation -- even Democrats agreed ObamaCare needed to be amended.

While attempts to repeal and replace ObamaCare certainly made it more difficult for insurers to price risk, the reality is that the basic structure of ObamaCare created an untenable situation where young people don’t want to pay for the very expensive coverage. Because of that, insurers face a pool of enrollees that are old, sick and expensive.

Sarlin’s article goes on to acknowledge that insurers are spooked because of “the current state of Obamacare’s health insurance exchanges, which are still struggling to attract insurers even as their profits improved last year,” before proclaiming, “The problem has a lot to do with the last eight months of repeal efforts.”

He argues that insurers could be forced to charge customers more under ObamaCare because of the ongoing turmoil in Congress, citing a Georgetown University professor who said “insurers don’t like uncertainty.”

In laymen’s terms, NBC News’ Sarlin feels that ObamaCare is bad but since the GOP wanted to repeal it, all issues going forward are the fault of Republicans – not the former president who it is named after.

"It has everything to do with the people of this country who are suffering each and every day under a health-care bill that is failing to meet their needs, that's bankrupting them," Senator Cory Gardner , R-Colo., said on CBS's "Face The Nation”  Sunday when asked if the GOP wanted to pass the ObamaCare repeal bill simply for political reasons.

"It's not working. That's the reason why we need new policy. That's what this fight is about," Gardner said. "It's to make sure that the American people are better off."

The third and final attempt to revamp ObamaCare failed on Monday when Senator Susan Collins of Maine became the third Senate Republican to oppose it. Trump’s party officially pulled the plug on Tuesday and decided to cancel the vote, leaving Americans with higher premiums and fewer choices because of President Obama’s Affordable Care Act.

Despite the failed attempt by the GOP to replace the law, the idea that ObamaCare would be well and good if the Republicans would just stop trying to change seems faintly ridiculous.

Sarlin did not immediately respond to Fox News’ request for comment.