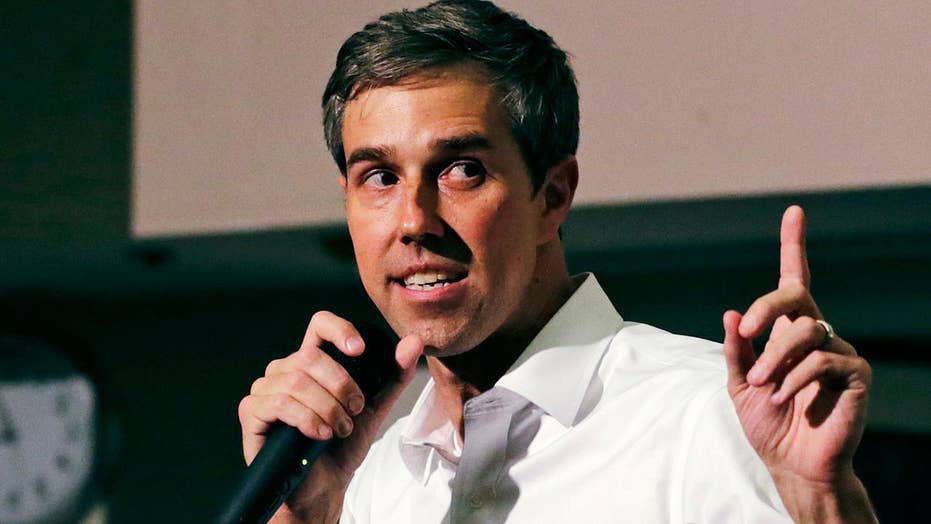 Beto O'Rourke says he could take Texas in a general election

The former Texas congressman rallies voters on the idea that the red state's 38 electoral votes would be in play if he were the Democrat nominee in 2020; Molly Line reports from the campaign trail in Claremont, New Hampshire.

KEENE, N.H. -- Beto O’Rourke predicts that if he wins the 2020 Democratic presidential nomination, he’ll take his native state of Texas in the general election.

The former congressman from El Paso also said he would “absolutely” support his campaign staff if they wanted to unionize. He also would consider lowering the federal voting age to 16, scrapping the Electoral College, increasing the number of justices on the Supreme Court, and eliminating the filibuster in the Senate.

WHERE BETO O'ROURKE STANDS IN THE LATEST 2020 POLL

Speaking with reporters after holding his first event in New Hampshire as a presidential candidate, O’Rourke said, "Yes I think we can win Texas. I think we’ve proven we know how to campaign. We’ve been to each one of those 254 counties. We’ve listened to the stories our fellow Texans have told us. We’ve incorporated it in the way in which we campaign.”

Winning Texas and its 38 electoral votes would be a major coup for the Democrats. The last Democrat to take the state in a presidential election was Jimmy Carter in 1976. Republican President Donald Trump won Texas in 2016 but by a smaller margin than GOP nominee Mitt Romney in 2012.

BETO O'ROURKE'S ROLL OUT: BIG BUCKS BUT SOME STUMBLES

O’Rourke arrived in New Hampshire – the state that will hold the first presidential primary, after an eight-and-a-half-hour drive in his Dodge Caravan from State College, Pa., the home of Pennsylvania State University. He spoke and took questions from a couple of hundred people who had waited at least two hours at Keene State College. The stop was O’Rourke’s first in a 48-hour swing in which he said he would visit all 10 of New Hampshire’s counties.

Asked about lowering the voting age to 16, O’Rourke said “I’m open to the idea of a younger voting age. ... There’s some merit to it.”

And he said he would “seriously consider” scrapping the Senate’s filibuster -- a generations-old tactic for preventing a measure from coming to a vote – as well as the Electoral College and increasing the number of justices on the high court.

“We have to look at some of these institutional reforms, whether it’s the Supreme Court, the Electoral College, the filibuster in the Senate. We’ve got to get democracy and our institutions working again,” he said.

Scrapping the Electoral College -- an idea that some of O’Rourke’s Democratic rivals also support -- is an unpopular idea in New Hampshire, a small state that sees plenty of traffic in the presidential general election thanks to its status as a battleground state.

O’Rourke arrived in the Granite State one day after independent Sen. Bernie Sanders of Vermont – one of the front-runners in the 2020 Democratic field – became the first presidential candidate to unionize his campaign staff.

Asked by Fox News if he would do likewise, O’Rourke said: “Absolutely. If those who work on this campaign and who comprise what I hope will be the largest grassroots effort this nation has ever seen, want to unionize, I support that all the way.”

During a question-and-answer session with the crowd, O’Rourke was asked about accepting large sums of contributions from pro-Israeli lobbyists during his 2018 Senate campaign.

“If you’re asking if the contributions I accept connect to the policies I support, the answer is no,” he responded.

O’Rourke once again called for a “two-state solution” between Israel and the Palestinians to achieve peace in the Middle East.

“I believe in peace and dignity and full human rights for the Palestinian people and the Israeli people. The only way to achieve that … is a two-state solution,” he said.

But he also took aim at embattled Israeli leader Benjamin Netanyahu – a close ally of Trump – as well as Palestinian leader Mahmoud Abbas.

“Right now we don’t have the best negotiating partners on either side. We have a prime minister in Israel who has openly sided with racists,” he charged. “On the Palestinian side, we have an ineffectual leader. Mahmoud Abbas has not been very effective in bringing his side to the table.”

O'Rourke was also asked about his commitment to reducing America’s consumption of fossil fuels.

“I support the Green New Deal. Yes, I understand that as close to 2030 as we possibly can, we have to have this economy and this country fully transitioned off a reliance on fossil fuels,” he said.

But he added that “I also drove here in a Dodge Caravan that burns gasoline. ... We also have to acknowledge that we’re still using these fossil fuels right now, so there’s got to be a responsible transition.”

"By embracing the Green New Deal, calling for an end to the Electoral College and supporting late-term abortions, Beto O’Rourke is on a collision course with everyday Americans who will reject his extremist views that offer no substance or solution," the RNC's Mandi Merritt said.

O’Rourke declared his candidacy last Thursday, and immediately drew throngs of media and large crowds during a three-day swing through Iowa, the state that votes first in the presidential caucus.

The day before he arrived in New Hampshire, O’Rourke announced that he hauled in an eye-popping $6.1 million in his first 24 hours as a candidate, the most yet by any 2020 Democratic White House hopeful.

Carol Beckwith, a resident of nearby Fitzwilliam, N.H., told Fox News that "Beto-mania" is “coming our way.

"We haven’t had much exposure to it really, compared to other people," she said, adding that she remained undecided on whom she’ll vote for in next February’s primary.

"I want the best person for the job," she said.

But Russ Provost of Richmond, N.H., is already sold on O’Rourke, saying he’s already contributed to the Texan's campaign.

“I watched him on TV a number of times," Provost said. "I liked his style. I want someone young. I want someone under 60 to take over the reins of this country. I don’t want older people running it anymore.

“If he could take Texas and just win the same states Hillary won, he wins."