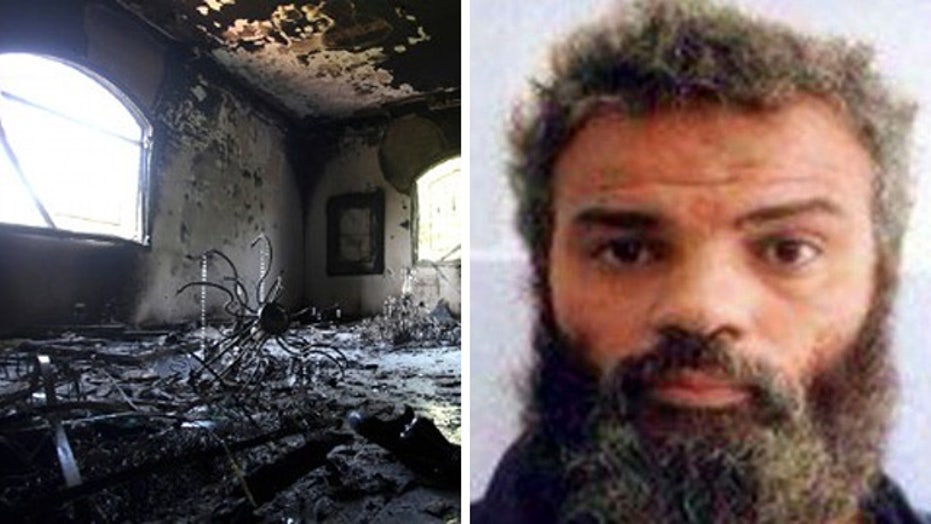 Abu Khatallah pleads not guilty for role in Benghazi attack

Khatallah being held in DC courthouse

WASHINGTON – Ahmed Abu Khatallah, the Libyan militant charged in the 2012 Benghazi attacks, pleaded not guilty Saturday afternoon in connection to the crime, during a brief first appearance before a U.S. federal judge.

Khatallah, who walked into the D.C. courtroom wearing black sweatpants, a black sweatshirt and plastic slip-on sandals, spoke softly during the 10-minute hearing.

He replied “yes” when asked to swear to tell the truth and “no” when he was asked if he was having trouble understanding the proceeding.

Khatallah wore headphones to listen to a translation of the hearing.

His court appointed lawyer, Michele Peterson, entered the not guilty plea to one count of providing material support to terrorists.

The indictment against Khatallah was handed up under seal on Thursday and was made public Saturday.

He was indicted by a federal grand jury on the charge of conspiracy to provide material support and resources to terrorists, knowing and intending that these would be used in preparation for and in carrying out a killing in the course of an attack on a federal facility, and the offense resulted in death.

It is likely that additional charges will be filed against Khatallah.

Khatallah was flown to Washington by helicopter shortly after sunrise Saturday from a navy warship, where he had been held since his capture nearly two weeks ago.

Khatallah is accused of being involved in the Sept. 11, 2012 attack in Libya that led to the deaths of former U.S. Ambassador Chris Stevens, information officer Sean Smith, and former navy SEALs Tyrone Woods and Glen Doherty.

"In a courtroom in our nation's capital, today we took the first step down the road to justice for the four American heroes killed in Benghazi," U.S. Attorney Ronald C. Machen Jr. for the District of Columbia said in a written statement. "This prosecution is a reflection of our determination to honor the sacrifice of U.S. citizens who perish on foreign soil in service to our country.  We will be steady, deliberate and relentless in seeking to hold accountable all who were responsible for this deadly act of terror."

Special Operations Forces captured Khatallah during a nighttime raid in Libya June 15-16, marking the first breakthrough in the investigation of the Benghazi attacks.

U.S. authorities have said they are looking to identify and capture additional co-conspirators.

Khatallah, a prominent figure in Benghazi's circles of extremists who was popular among young radicals, acknowledged in an interview with The Associated Press in January that he was present during the storming of the U.S. mission in Benghazi. But he denied involvement in the attack, saying he was trying to organize a rescue of trapped people.

Prosecuting Khatallah will be a test of the Obama administration’s commitment to try suspected terrorists in the American criminal justice system even as Republicans in Congress call for Khatallah and others to be held at the U.S. detention facility in Guantanamo Bay, Cuba.

Khatallah is one of just a few cases in which the administration has captured a suspected terrorist overseas and interrogated him for intelligence purposes before bringing him to federal court to face charges.