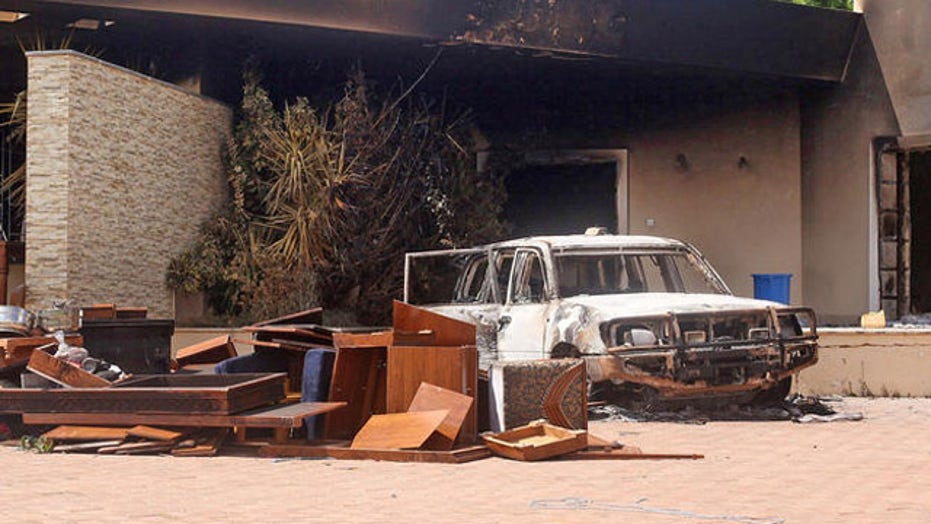 New details about the Obama administration's initial story-line on the Benghazi attack are raising additional questions about top-level efforts to downplay terrorism, with one report showing a State Department official pushed to delete a section that could have been used to "beat up" her department.

The fresh reports have surfaced two days after three whistle-blowers testified on Capitol Hill about the Benghazi attack. One of them sharply challenged the administration's decision to describe the attack out of the gate as a protest gone wrong.

ABC News reported Friday that, despite administration claims that the flawed description reflected the best intelligence at the time, the talking points that led to the statement were revised 12 times.

Initial versions, as has been previously reported, contained references to Al Qaeda that were later deleted. But the latest excerpts show how State Department spokesman Victoria Nuland pressed the CIA to scrub references to the agency's prior security warnings.

According to ABC News, the original paragraph read:

"The Agency has produced numerous pieces on the threat of extremists linked to al-Qa'ida in Benghazi and eastern Libya. These noted that, since April, there have been at least five other attacks against foreign interests in Benghazi by unidentified assailants, including the June attack against the British Ambassador's convoy. We cannot rule out the individuals has previously surveilled the U.S. facilities, also contributing to the efficacy of the attacks."

But Nuland wrote that the lines  "could be abused by members [of Congress] to beat up the State Department for not paying attention to warnings, so why would we want to feed that either? Concerned ..."

The paragraph in question was then reportedly deleted.

She said in a statement: "The State Department first reviewed the talking points on Friday evening with the understanding that they were prepared for public use by members of Congress. The  spokesperson's office raised two primary concerns about the talking points. First that the points went further in assigning responsibility than preliminary assessments suggested and there was concern about preserving the integrity of the investigation.  Second, that the points were inconsistent with the public language the Administration had used to date -- meaning members of Congress would be providing more guidance to the public than the Administration."

The Weekly Standard, which referenced the Nuland exchange briefly in a prior account, also reported new details Friday, describing how then-CIA Director David Petraeus voiced surprise when he learned the Saturday after the attack that officials had deleted all prior references to Al Qaeda and jihadists, leaving only the word "extremists."

U.S. Ambassador to the U.N. Susan Rice would use the final version of the talking points to say on several Sunday shows that the attack was triggered by protests over an anti-Islam film.

While administration officials and congressional Democrats have described the protracted debate over the talking points as politically motivated and inconsequential, the testimony this week drew new attention to it.

Greg Hicks, former deputy chief of mission in Libya, said Rice's comments actually hurt the FBI investigation by insulting the Libyan president -- who gave a conflicting account at the time by saying the attack was premeditated.

Hicks said the anti-Islam film was actually a "nonevent" in Libya, and his "jaw dropped" when he heard Rice's comments.

ABC News reported that the CIA's first drafts did say the attack appeared to be "spontaneously inspired" by the protests at the embassy in Cairo. However, the early versions also said "we do know that Islamic extremists with ties to al-Qa'ida participated in the attack."

The State Department and White House have continued to defend their actions and intervention in light of the new details.

After it was first revealed that references to security concerns -- in addition to references to Al Qaeda -- were removed, White House Press Secretary Jay Carney said: "What we said and what remains true to this day is that the intelligence community drafted and redrafted these points."

He defended administration claims that the faulty statements were merely the product of incomplete intelligence in a rapidly changing environment. Despite the excerpts, he stood by claims that White House involvement was minimal.

"The fact that there are inputs is always the case in a process like this. But the only edits made by anyone here at the White House were stylistic and non-substantive. They corrected the description of the building or the facility in Benghazi from 'consulate' to 'diplomatic facility' and the like," he said.

State Department spokesman Patrick Ventrell also said Rice's comments were based on the intelligence community's "best assessment that there was not any evidence of months-long pre-planning or pre-meditation, which remains their assessment."