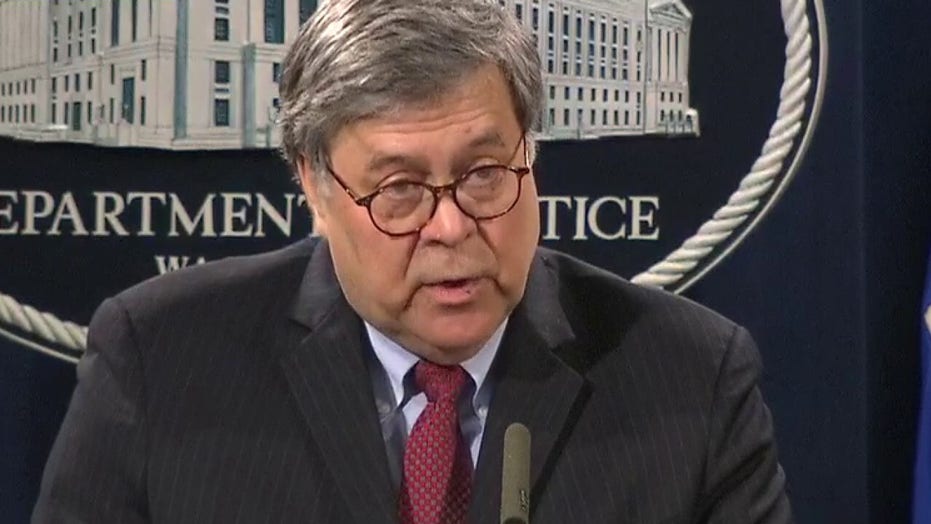 Attorney General Bill Barr says the Department of Justice will do its part to turn something bad into something good.

WASHINGTON (AP) — Attorney General William Barr says law enforcement officers were already moving to push back protesters from a park in front of the White House when he arrived there Monday evening, and he says he did not give a command to disperse the crowd, though he supported the decision.

Barr’s comments in an interview with The Associated Press on Friday were his most detailed explanation yet of what unfolded outside the White House earlier this week. They come after the White House and others said repeatedly that the attorney general ordered officers to clear the park. Shortly after officers aggressively pushed back demonstrators, President Donald Trump — accompanied by Barr, Pentagon leaders and other top advisers — walked through Lafayette Park to pose for a photo at a nearby church that had been damaged during the protests.

The episode played out on live television and prompted an outcry from some Republicans and former military leaders, including Gen. Jim Mattis, Trump's first defense secretary. Barr told the AP that much of the criticism was unwarranted and that Mattis' rebuke was “borne of ignorance of the facts.”

Still, administration officials have spent much of the week trying to explain how the situation escalated and why smoke bombs, pepper balls and police on horseback were needed to clear the largely peaceful crowd.

Earlier in the week, White House spokeswoman Kayleigh McEnany told reporters it was Barr who made the decision to push back the security perimeter outside the White House on Monday morning. McEnany said that when Barr arrived at Lafayette Park later that day to survey the security situation, he was surprised to see that action had not yet been taken.

“So he said that we needed to get going with moving that perimeter. He told the officers that out there,” McEnany said Wednesday. A person familiar with the matter also said earlier this week that Barr told law enforcement to take action to move the perimeter when he arrived in the park.

On Friday, Barr told the AP that both he and U.S. Park Police were in agreement on the need to push back the security perimeter. He said he attended a meeting around 2 p.m. Monday with several other law enforcement officials, including Metropolitan Police Chief Peter Newsham, where they looked at a map and decided on a dividing line. Under the plan, the protesters would be moved away from Lafayette Park and federal law enforcement officials and members of the National Guard would maintain the perimeter line, Barr said.

Barr said the plan was supposed to be put into action soon after the meeting, but additional officers and National Guard troops had to be called in because of a high number of officers who had been injured throughout the weekend. It had not yet been implemented when he arrived at the park later in the evening and the crowd had grown much larger than it was in the afternoon, Barr said.

Still, he said he did not give the officers the orders to proceed — they were already in the process of doing so when he showed up.

“They told me they were about to make the announcement and I think they stretched the announcements over 20 minutes. During the time I was there, I would periodically hear announcements,” Barr said. “They had the Park Police mounted unit ready, so it was just a matter of execution. So, I didn’t just say to them, ‘Go.'"

Barr said it was a Park Police tactical commander — an official he never spoke to — who gave the order for the law enforcement agencies to move in and clear the protesters.

“I’m not involved in giving tactical commands like that," he said. “I was frustrated and I was also worried that as the crowd grew, it was going to be harder and harder to do. So my attitude was get it done, but I didn’t say, ‘Go do it.’”

Barr insisted there was no connection between the heavy-handed crackdown on the protesters and Trump's walk soon after to St. John's Church. The attorney general said he had learned in the afternoon that Trump wanted to go outside, and said that when he went to the White House in the evening, he learned of the president's intended destination.

Several different groups, including the Secret Service and Park Police, were involved in the pushback on the protesters. Members of the National Guard were present but didn't engage with the protesters, Barr said. Trump also threatened that night to deploy active-duty military forces to the states if local and state authorities could not adequately quell the demonstrations, which have occasionally turned violent.

Mattis, who left the administration in 2019, said Wednesday that Trump was setting up a “false conflict” between the military and civilian society, and took particular issue with the show of force outside the White House.

“We know that we are better than the abuse of executive authority that we witnessed in Lafayette Square. We must reject and hold accountable those in office who would make a mockery of our Constitution,” Mattis said.