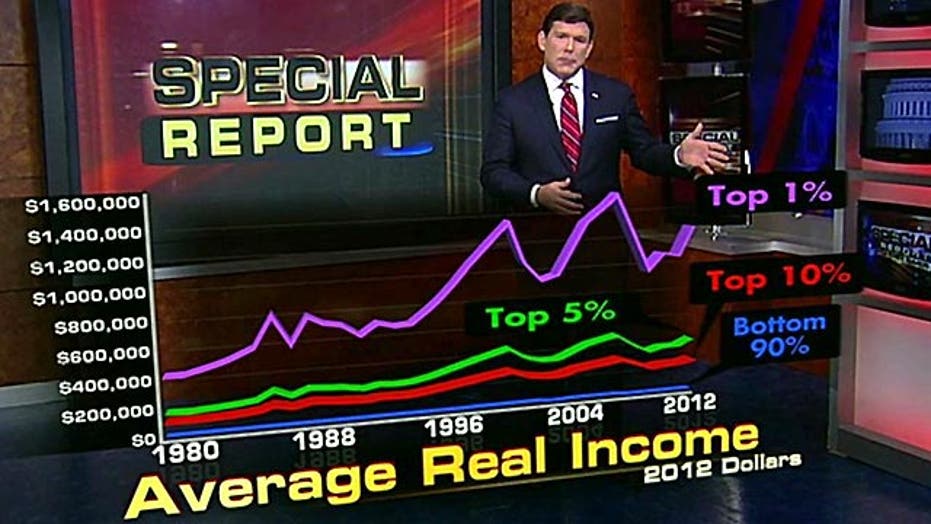 A look at the gap between rich and poor

Income inequality -- the gap between the rich and poor -- is an issue U.S. presidents of both parties have spoken of for years.

But perhaps no president has hammered the issue as emphatically as President Obama.

In his 2012 State of the Union address, Obama said: "The defining issue of our time is how to keep that promise alive. No challenge is more urgent. No debate is more important. We can either settle for a country where a shrinking number of people do really well, while a growing number of Americans barely get by, or we can restore an economy where everyone gets a fair shot, and everyone does their fair share, and everyone plays by the same set of rules."

But a look back shows that income inequality has grown, not shrunk, under the current president.

The gap between rich and poor has fluctuated greatly over time, but there are signals that the country is going back to a divide not seen in a long time.

Back in 1928, the top 1 percent of earners received about a quarter of all pre-tax income. The bottom 90 percent received just over half of it.

Fast forward to the Great Depression and World War II. America experienced a time of economic change and development that dramatically reshaped U.S. income distribution. In 1944, under Franklin D. Roosevelt, the wealthy weren't quite as wealthy. The top 1 percent saw their income share sink to 11 percent. Meanwhile, the bottom 90 percent saw their income share rise to 67 percent.

Through the '50s and '60s and early '70s, decades of economic growth brought prosperity for all. Each economic group's income share remained fairly constant. Then came the late 1970s, where under President Carter, the top 1 percent saw their share begin to rise and the bottom 90 percent saw theirs begin to fall.

That number has dramatically increased since Obama's inauguration in 2009. By 2012, the top 1 percent was back to where it was decades ago -- taking in about a quarter of all pre-tax income. Yet the bottom 90 percent saw their share fall below 50 percent for the first time in history.

Some analysts say this is because Obama was more focused on health care than alleviating unemployment and poverty.

"Our system is predicated on presidential leadership, and the president has not been focused on either you know poverty or unemployment," said AEI's Michael Strain. "Early in his term he was focused on health care as we all know, and you know we have the election, and this just hasn't been at the front-burner."

But Heather Boushey, with the Washington Center for Equitable Growth, said, "I don't think you can lay the blame for that at the feet of Obama."

She continued: "I think that that blame lies also with the U.S. Congress who's made decisions about what they want to fund and how they want to focus on dealing with the deficits rather than focusing on getting us back to something close to full employment."

A look at what's called "real income," or income adjusted for inflation, underscores the trend in recent decades.

But the top 10 percent of earners typically made over a quarter of a million dollars in 2012. And the top 1 percent averaged over $1.2 million in earnings that year. That is where the most dramatic fluctuation can be seen over time, as the gap between lower and top earners has widened.

According to the work of Emmanuel Saez, a professor at the University of California, Berkeley, during the post-recession years of 2009-2012, top earners snagged a greater share of total income growth than during the boom years of 2002-2007.

In other words, income inequality has become more pronounced since the Bush administration, not less.