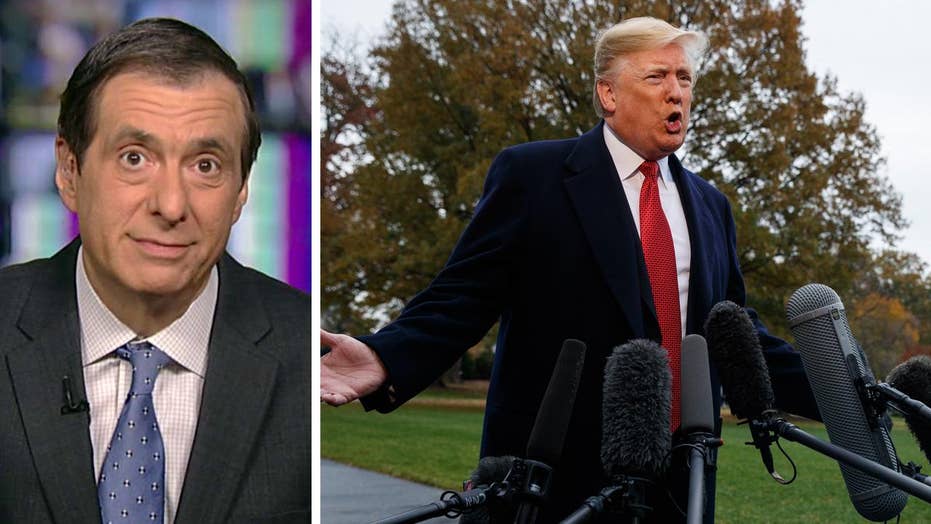 Kurtz: President takes press flak whether he's speaking or not

'MediaBuzz' host Howard Kurtz weighs in on why no matter what President Trump does, or doesn't do, he still ends up as the top story dominating the news cycle.

No matter what he does — or doesn't do — he's the story. The biggest story. Often the only story.

And that story, the continuous story, inevitably involves we the media. The president excels at dragging the news business into the center of every controversy, and its members all too often fall into the trap.

Even the recent chatter about whether media outlets should boycott White House press briefings puts them in a potential confrontation with Trump, which is just the way he likes it.

The president was in Paris over the weekend, for the 100th anniversary of the end of World War I, and this Washington Post story yesterday encapsulates the addictive nature of the coverage.

The lead notes that "on a trip to Europe, the president hardly said a word — and he still managed to outrage at almost every turn."

But is that alleged outrage fanned by the media? And if Trump generates outrage whether he speaks or not, isn't that a telling statement?

Other than one critical tweet about Emmanuel Macron (based on an inaccurate newspaper story, the Post notes), "Trump didn't throw any sharp elbows at his peers here. It was still all about him."

Translation: The media still made it all about him.

The newspaper's take is that "it was because of the images. He looked uncomfortable and listless in a bilateral meeting with Macron, whose sinewy energy stood in stark contrast to Trump's downbeat expression as the French leader patted him on the thigh."

We can't have that!

Trump also skipped a scheduled tour of a military cemetery for Americans, blaming the rain. And by the way, that was a legitimate issue to cover, as it felt like a snub by a president who had gone to France in part to honor the sacrifices made by our soldiers.

At an event at the Arc de Triomphe, Stone sat "stone-faced as Macron railed against the rise of nationalism — a rebuke of Trump's professed worldview. The overall takeaway to many was a president turning away from the world, a man occupying the office of the leader of the free world who appeared withdrawn and unenthusiastic on the global stage."

And the first quote was a tweet by former Obama aide David Axelrod, who said, "America First feels like America Alone."

The president made huge news on previous foreign trips by getting into confrontations with other western leaders. But on a trip where he largely avoided public conflict, for whatever reason, Trump still drew negative coverage.

(He offered a different take on Twitter: "Just returned from France where much was accomplished in my meetings with World Leaders. Never easy bringing up the fact that the U.S. must be treated fairly, which it hasn't, on both Military and Trade.")

Meanwhile, CNN filed suit this morning to force the White House to restore Jim Acosta's credentials. The Trump team suspended the credentials last week after a dustup in which he refused to stop asking the president questions or give up the microphone.

New York Times media columnist Jim Rutenberg weighed in yesterday on the fallout. To his credit, Rutenberg pointed out that Acosta "is a somewhat polarizing figure, viewed by some of his press corps colleagues as a showboat."

The White House suspended Acosta's credentials after a dustup in which he refused to stop asking Trump questions or give up the microphone. To his credit, Rutenberg pointed out that Acosta "is a somewhat polarizing figure, viewed by some of his press corps colleagues as a showboat."

After noting that CNN President Jeff Zucker told his producers not to play up the Acosta punishment, the column said that "CNN would not be led by the nose into giving significant airtime to another Trump attack on the news media ...

"Reporters could stage a group protest. But that would make them look like they're at war with the president, just as he always says they are. Or they could do nothing and effectively 'submit to his authority to determine who gets to hold him accountable,'" as GOP strategist and fierce Trump critic Steve Schmidt put it.

It's a no-win situation. And here's why a boycott wouldn't work:

— Much of the country would turn on the press for not doing its job. Refusing to show up at briefings is a very tough sell.

— Trump would pound away at the media, saying they have moved into the opposition camp.

— Journalists would be seen as hopelessly self-absorbed if they surrendered the chance to question the White House press secretary on the public's behalf.

— And most important of all, it would never happen. There's no way all the disparate media outlets, with their varying interests, would agree to a joint boycott, and the show would go on.

This is actually somewhat symbolic since Sarah Huckabee Sanders is now briefing only rarely as her boss takes more and more questions from reporters.

But it highlights once again that most media debates these days are about Donald Trump — and the media.