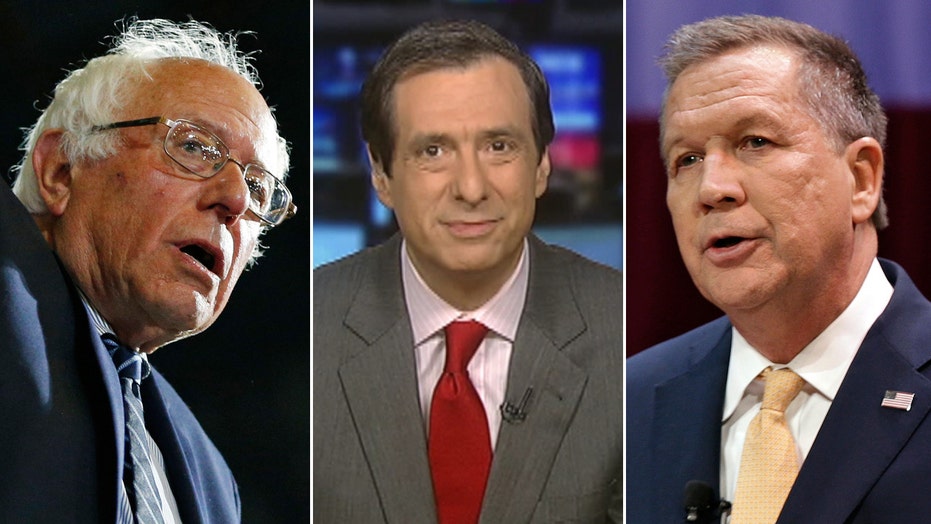 Bernie burned by Obama? Kasich not yet endorsing Trump? 'MediaBuzz' host reacts to both parties' struggle to unite behind presumptive nominee

It’s usually a kabuki dance that leads to a somewhat awkward embrace as the victor showcases his support from the vanquished.

But has there ever been a more bizarre and tangled process than what we’ve seen in both presidential contests this year?

John Kasich became the latest Republican yesterday to trash Donald Trump and strongly suggest he may not be endorsing him, ever. Bernie Sanders is so reluctant to end his campaign that he was at the White House yesterday, where President Obama undoubtedly tried to mollify him—and then promptly released a video endorsement of Hillary Clinton.

It’s as if each party fought a civil war and now can’t make peace.

Endorsements are overrated and hyped by the press, as I always say. But when a party nominee can’t get support from his or her own rivals, it suggests a deeper ailment.

This might be a good time to recall that every Republican candidate took the pledge to support the party’s nominee—which was mainly aimed at keeping Trump in the fold if he lost--and now several are breaking that vow. So such pledges should be deemed worthless in the future.

Kasich, who has kept a low profile since quitting the race, was asked if he would support Trump. “Hard to say,” he told Fox’s Bill Hemmer, adding: “Right now, the divisiveness, the division, the name calling, it just doesn't go down well with me.”

The Ohio governor said he told Trump in a phone call that “we’re like two companies,” with a “different vision,” “different value system” and “different objective.” Kasich called Trump’s remarks about the judge in the Trump U. case, Gonzalo Curiel, “just terrible.”

Paul Ryan, having tepidly endorsed Trump, now seems to criticize him every day after calling his comments about Curiel the “textbook definition” of racism. Just yesterday, when the House speaker said something nice about Trump’s temperament, NBC’s Andrea Mitchell pressed him about how he could endorse a man he had condemned for racist comments. And, she asked, “Is it too late for the party to change the rules?”

Ryan said Trump had won enough delegates to be nominated.

There are many reasons why party leaders routinely endorse a presumptive nominee. They think he might win, and they want influence in the next administration. They need help retiring campaign debt. They might want a Cabinet post or VP slot, or to push their friends for plum jobs. They want to enhance party unity and perhaps ride the nominee’s coattails.

But some of these Republicans may now be betting that Trump will lose, or will hurt their chances of reelection. They see the pummeling he is taking and don’t want their brand associated with his brand.

Some, remembering his insults, may just be out for revenge.

It hardly helps that in a Fox poll out last night, Trump is trailing Clinton by 3 points, while last month he was on top by 3.

And, in the current toxic media environment, any Republican can buy a good headline by slamming Trump.

But they’re in a box, because Trump got more than 13 million votes, more than any other Republican in a primary campaign.

“The truth is that Trump is a wedge issue against his own party,” says National Review Editor Rich Lowry, a prominent critic. “Disavowing him means upsetting all those good Republicans who voted for him in the primaries, while supporting him means owning his irresponsible positions and statements. There is no good answer, which is why faith in a Trump ‘pivot’— to a more disciplined, conventional candidate — runs so deep in the establishment. Sen. Bob Corker, who will be a perfect running mate for Trump if he wants a wing-man uncomfortable with much of what he says, is constantly talking about the pivot…

As for Sanders, he will undoubtedly back Hillary at some point, but he is stretching out the process, reluctant to give up the limelight. He did send a signal on the White House driveway about how he will “do everything in my power and I will work as hard as I can to make sure that Donald Trump does not become president of the United States.”

Sanders said he will meet with Clinton soon “to see how we can work together to defeat Donald Trump.”

It was an easy call for Obama, obviously, even if the media’s conventional wisdom last year was that Clinton needed to distance herself from the president to have a chance of winning.

Whether it’s Bernie backing Hillary or Kasich, Cruz, Rubio and Bush supporting Trump, politicians will ultimately do what’s in their self-interest. The larger challenge for both nominees is getting those who supported their former rivals to turn out rather than sit on their hands.