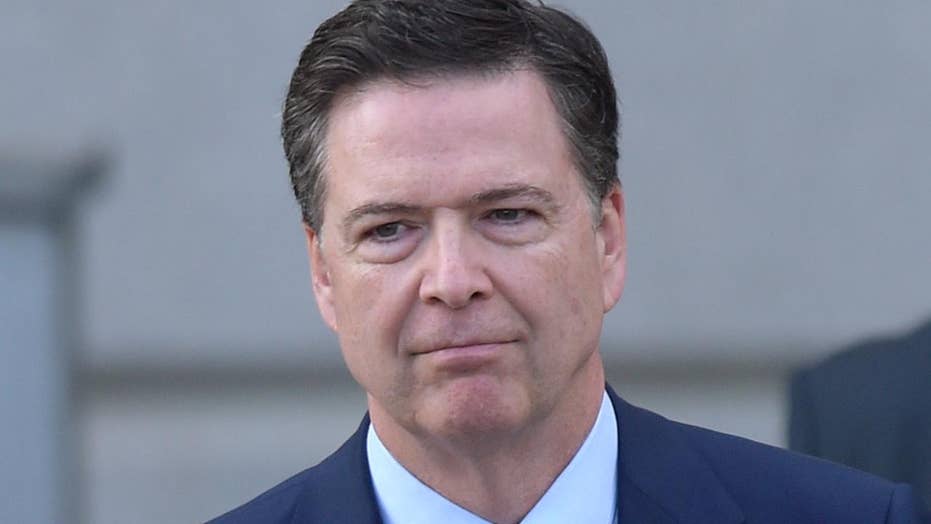 The Senate was still taking its final vote Friday before a 10-day recess when Burr bounded out of the chamber. He traced a circuitous route, gliding past the Northeast Grand Staircase in the Capitol, making a hard right into the Ohio Clock Corridor, then jogging left again past the Mike Mansfield Room. Burr then strode down a carpeted hallway leading past the hideaway offices of other senators.

The senator boarded an obscure elevator at the end of that hallway that he obviously didn’t use often. He asked a U.S. Capitol Police officer carrying a salad if the elevator went to the SCIF. The elevator didn’t go as far down as Burr needed it to. So he disembarked, resuming his break-neck stride, spilling out into the upper level of the U.S. Capitol Visitor’s Center (CVC).

Burr cut past school children and tourists -- nimbly avoiding the obvious thoroughfare to the SCIF. After all, reporters circled near the precise spot the Intelligence Committee chairman wanted to avoid -- a spiral staircase beneath a skylight close to the Senate subway station that led to the obvious doorway concealing the SCIF.

Burr made his way to an escalator and coasted past the statues of King Kamehameha from Hawaii and Sakakawea from North Dakota. He disappeared behind a set of wooden doors by the CVC appointments desk.

Burr’s quarry was up ahead. A non-descript, double doorway at the end of the hall. All that sheathed the passageway was a six-panel, folding screen that looked like it belonged in the changing room of a high-end department store. Burr rapped his knuckles on the doorway three times to gain ingress. He then disappeared behind the ultimate backdoor on Capitol Hill.

There was a reason behind Burr’s cloak-and-dagger approach. He and other members of the Senate Intelligence Committee had a sub rosa meeting in the subterranean SCIF with FBI Director James Comey. The topic: Russian influence in last fall’s election, leaks and undoubtedly, how someone exposed a phone call between former National Security Adviser Michael Flynn and Moscow’s Ambassador to Washington Sergey Kislyak.

Better yet, how did they intercept the call? Was it a mistake? Was Flynn under surveillance? Was there a super-secret warrant authorized by a Foreign Intelligence Surveillance Act (FISA) court?

Even so, why was the U.S. wiretapping one of its own citizens? FISA law expressly prohibits such eavesdropping. Were the participants on the call “unmasked” because spooks were listening for something else and stumbled upon Flynn on the line?

Flynn is now out of a job but really a bystander in the whole operation.

“I want to know what the Russians have on Donald Trump?” demanded House Minority Leader Nancy Pelosi, D-Calif.

Her fellow Democrats went further, invoking parlance from a malignant era not so long ago.

“Did the president know and when did he know it?” asked House Majority Whip Steny Hoyer, D-Md.

Whatever the reason, it was enough for Burr to keep the meeting on the Q.T. and slash his way through back hallways just to make the briefing. Congressional sources wouldn’t even confirm on the record that Comey was at the Capitol.

Reporters never would have known Comey was around had the director’s lanky, 6-foot-8-inch frame and robust security detail not betrayed him as he made his way to the conclave.

Soon, other senators came and went from the meeting, but no one would stop to talk or even generally elaborate on the subjects discussed.

“It was a classified briefing,” was all Senate Majority Whip John Cornyn, R-Texas, offered.

“We made our non-statement, statement,” declared Virginia Sen. Mark Warner, the top Democrat on the Intelligence committee.

This was truly under the Cone of Silence.

What had overcome the usually loquacious senators? Were they silenced like Sen. Elizabeth Warren, D-Mass., last week?

The Senate determined Warren violated the body’s sacred “Rule XIX” when she bad-mouthed then-colleague and now Attorney General Jeff Sessions. The Senate then barred Warren from speaking on the floor for the remainder of the debate on Sessions’ nomination.

But after huddling with Comey for more than two hours, the senators didn’t say anything.

They didn’t have to. Their silence said everything.

There is no issue as white hot in Washington about what’s going on now with Russia, Flynn and potential issues between President Trump and Moscow.

It may be poor form, but lawmakers on both sides of Capitol routinely walk out of classified sessions, stop at a bank of microphones and immediately spill things to the press.

It’s not that they openly cough up classified or sensitive information to reporters. Sometimes the lawmakers grouse that they didn’t learn anything in those briefings that they hadn’t already read in the paper.

One lawmaker privately told Fox several years ago that the worst possible optic is to walk out of a classified briefing, then immediately talk to a scrum of scribes.

Reporters may not like it. But perhaps that’s how it should be following a classified session. Hold your tongue. Play the cards close to your vest. Don’t chatter.

The fact that none of that jawboning unfolded following Friday’s covert Comey confab reveals how vital the session truly was. The reticence revealed how sensitive the information may be.

This is always the challenge when reporting on intelligence matters.

Reporters never have the full story. They can’t. The information is classified. It’s illegal for those in the intelligence community, aides and lawmakers to publicly unveil top-secret material.

And there’s usually a reason when factions inside the
intelligence community go rogue and reveal information to burn a rival. But that’s selective and never the entire story. Those on the outside lack access to additional, contextual material.

Perhaps there’s good justification why actor A did something. Why did actor B do that? Well, there may be a perfectly fine explanation, ensconced inside the classified documents. But the outside world will never know. The other information remains obscured.

More often than not, information deliberately leaked to the press may not even be true. Or at the very least, leakers slightly contour the information to influence public perception and shape the debate.

Those inside the intelligence community know it’s not true. But that’s the problem. They can’t volunteer additional information to countervail the claims without potentially breaking the law. They’re stuck.

These are the black arts of the intelligence world -- performed not just in Washington but in Moscow, Vienna, London, Prague and other capitals.

The leaks about Flynn say a lot about him and his political adversaries.

There were no leaks or even vague comments following Comey’s session. This was a stark contrast to how things usually go down on Capitol Hill.