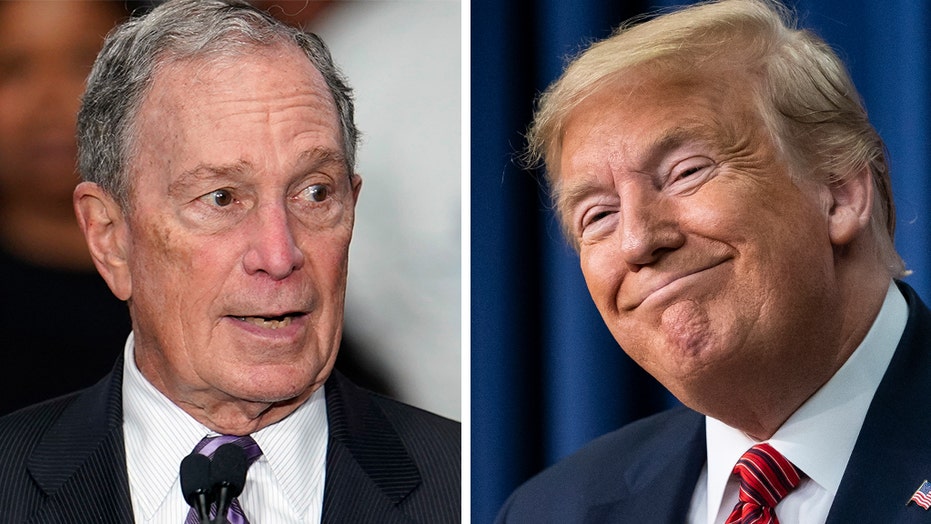 Trump riffs on Bloomberg: 'Mini Mike' is 'getting pounded tonight' at the debate

Trump riffs on Bloomberg: 'Mini Mike' is 'getting pounded at the debate' tonight

As the Democratic presidential candidates targeted debate stage newcomer Michael Bloomberg in a ferocious clash over who will get to challenge President Trump in November, the president on Wednesday night stoked his base in a raucous "Keep America Great" rally in Phoenix -- before joining the attacks on the former New York City mayor.

To loud cheers in a crowded venue filled with red hats and campaign signs, Trump railed against previous FBI leadership as "dirty cops," touted his signing of the USMCA as a victory for farmers, called the media "fake news," bragged about killing terrorists and crowed over his success appointing federal judges and Supreme Court justices.

Later in the evening, Trump joined the chorus of attacks against Bloomberg, who has spent over $400 million on his campaign, over how the Democrat performed in the biggest moment of his quest for the White House so far.

"Mini Mike Bloomberg’s debate performance tonight was perhaps the worst in the history of debates, and there have been some really bad ones," Trump tweeted. "He was stumbling, bumbling and grossly incompetent. If this doesn’t knock him out of the race, nothing will. Not so easy to do what I did!"

Meanwhile in Las Vegas, Democrats were going after each other for everything from non-disclosure agreements to their health care plans.

In an explosive moment, attendees cheered when Sen. Elizabeth Warren, D-Mass., called on Bloomberg to release women from nondisclosure agreements they have signed concerning their civil complaints that he harassed them in the workplace.

Warren landed one of the biggest punches of the night on the topic after Bloomberg cited gender diversity at his companies and his foundation to bolster his progressive credentials.

"I hope you heard what his defense was: 'I've been nice to some women,'" she said

Democrats also challenged Bloomberg on the "stop-and-frisk" policy from his tenure as New York City mayor, the fact he has not released his tax returns, his immense wealth and more.

Back in Phoenix, Trump took the opportunity to share his opinion on Bloomberg in front of his supporters, who he said under his presidency were no longer "deplorables."

"Now they have a new member of the crew, Mini Mike," Trump said. "No boxes, we call him 'no boxes.' And I hear he's getting pounded tonight. You know he's in a debate? I hear they're pounding him.

"He spent $500 million so far," Trump said, only slightly exaggerating Bloomberg's campaign spending, "And I think he has 15 points. It just came out. Hey fake news, how many points does he have right now? 15?"

Trump also compared himself favorably to various other self-funded presidential campaigns, including Bloomberg's.

He continued: "But Mini Mike, $411 [million], then they had this idiot [Tom] Steyer, we call him 'impeachment Steyer.' How did that work out, Steyer? He's another beauty. The guy worked, he spent $210 million, he got one-third of one percent in Iowa, and in New Hampshire, he did much better. He got less than 3 percent. The guy's in there for like $250 million. How did it work out, Steyer? Jerk. I don't, I never even heard of him."

Trump also listed off former independent presidential candidate Ross Perot and former Republican primary candidate Steve Forbes before getting to his own campaign.

The crowd broke out into loud cheers as Trump delivered the line.