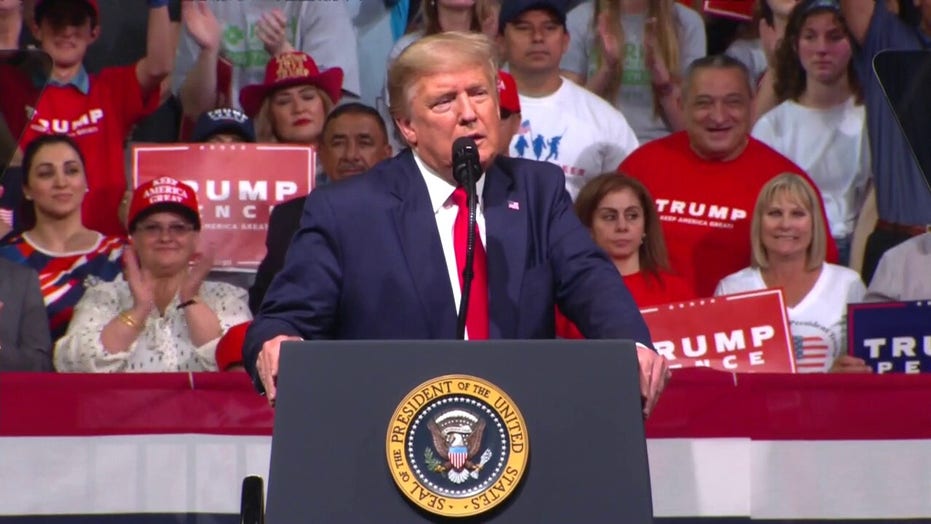 Trump riffs on Bloomberg: 'Mini Mike' is 'getting pounded tonight' at the debate

Trump riffs on Bloomberg: 'Mini Mike' is 'getting pounded at the debate' tonight

President Trump, at a rally in Phoenix on Wednesday night, took shots at fellow billionaire Michael Bloomberg at the same time the former New York City mayor was in Las Vegas, taking fire from fellow Democrats during his first presidential debate.

"Now they have a new member of the crew, Mini Mike," said Trump. "'No Boxes,' we call him 'No Boxes.'" The reference was to jabs Trump has been taking at Bloomberg regarding his height, including the president's previous claim that Bloomberg would need to stand on a box at the debate.

"I hear he's getting pounded tonight. I hear they're pounding him," the president continued. "I think he spent all this money, he has maybe 15 points. Hey, fake news, how many points does he have? They won't tell you the truth."

Then Trump took a shot at MSNBC, which televised the debate, calling the left-leaning network "MSDNC."

"MSDNC is worse than CNN, and they're all pretty bad," he said, to a round of boos.

Trump also hit Bloomberg for "buying" his candidacy, as the president put it.

"Mini Mike has spent $411 million so far. That idiot [Tom] Steyer -- we call him 'Impeachment Steyer' -- he spent $210 million and look where that got him. I think he got one-third of one percent in Iowa. I never even heard of him."

He added, "Hillary [Clinton] spent three times more than we did and lost."

Trump had kicked off the rally by paying tribute to a World War II veteran who was carried into the rally by two Trump supporters, a clip of which circulated on social media.

"I don't know if he knows it. He’s right now the hottest celebrity in the world. Maybe even hotter than Trump," the president said.

"He's all over television; even fake news CNN had him on," Trump said of WWII veteran Irvin Julian.

Trump focused on his economic record, saying his administration has set 144 records on the stock market.

"From our rural communities to our inner cities we are expanding the American blessings. We added 225,000 jobs last month, did you see that?" Trump said.

Then he took a shot at former President Barack Obama, who had once claimed Trump would need a "magic wand" to make manufacturing jobs return to America.

"Many were manufacturing jobs that were never going to come back. Right?" Trump told the crowd. "You need a 'magic wand' to make them come back. They came back."

Trump said his administration had lifted 10 million people off welfare.

"And happily!" he added. "They have jobs and they love going for work, and if they don't like that job they can get another one because people are starving to get great employees."

Trump then said that he was "cutting regulations like nobody has ever cut," and helped the U.S. to achieve energy independence for the first time.

"Such beautiful words!" he said.

Trump said that Democrats in Washington were "more extreme than ever before."

"They're taking it from Crazy Bernie," he said, referring to democratic socialist Sen. Bernie Sanders.

"I hear a lot of bad things about their vote count," the president said about the Democrats' early nominating contests. "I hear they don't know what they're doing with the vote count in Iowa," he said referring to technical issues in vote counting at the Iowa caucuses which led to confusion over which candidate came out on top. "We set a record in Iowa, we had more votes than anybody's ever had for an incumbent president," Trump boasted.

Trump's event at Arizona Veterans Memorial Coliseum was the first of three rallies in three days. He won Arizona over Hillary Clinton in 2016 by about 3.5 percent, but Sen. Kyrsten Sinema, a moderate Democrat, narrowly defeated Republican Sen. Martha McSally, in 2018. (McSally was later appointed to Arizona's other U.S. Senate seat when incumbent Sen. Jon Kyl resigned.)

After Arizona, Trump is scheduled to take his tour to Colorado Springs, Colorado, on Thursday, and then Las Vegas on Friday, on the eve of Saturday's critical Nevada caucuses.

Wednesday's rally served to counter the Democrats taking the debate stage, as Sanders recently surged to the forefront of the race and Bloomberg’s heavily funded ad campaign has earned him his first debate appearance.

Supporters of the president showed up in droves to attend the rally, using umbrellas to protect themselves from the Arizona sun as they waited hours to enter the arena.

"Internal REAL Polls show I am beating all of the Dem candidates," Trump tweeted. "The Fake News Polls (here we go again, just like 2016) show losing or tied. Their polls will be proven corrupt on November 3rd, just like the Fake News is corrupt!" It came after the ABC News/Washington Post survey was released, showing every major candidate among the Democrats beating Trump in general election matchups. That included former Vice President Joe Biden, Sanders and Bloomberg, all of whom polled at or above 50 percent in matchups with Trump.

Hours before the rally, in California, Trump signed a memorandum directing more of that state's scarce water supply to farmers and other agriculture interests in the Central Valley, a Republican stronghold.

“For too long water authorities have flushed millions of gallons into the Pacific,” Trump said. “I ordered the administration to update outdated opinions which determined water allocation in this state.”