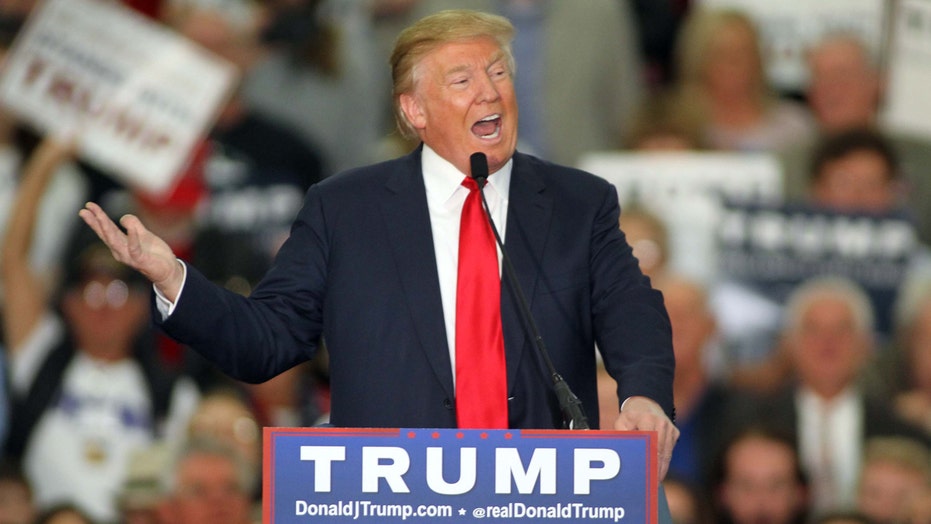 Trump doubles down on 9/11 comments


2016 GOP POWER INDEX: TRUMP’S DISTRACTIONS OPEN WAY FOR OTHERS
Republican frontrunner Donald Trump has been spending too much time on defense.

Trump’s efforts in the last two weeks have been largely focused on cleanup. First, it was defending an unsubstantiated claim that he saw “thousands and thousands” of Muslims publicly celebrated in New Jersey on Sept. 11, 2001. That gave way to Trump’s mocking of a physically disabled NYT reporter, and Trump’s subsequent back and forth with the newspaper over whether his mockery was intentionally accurate, or accidentally so. The reporter says he’s known Trump for two decades.

Another attempted cleanup turned messy was Trump’s effort to show support in the African-American community by heralding the backing of dozens of black pastors. After Trump crowed about a Black Lives Matter protestor at an Alabama rally being “roughed up” by his supporters, Trump put together an event for today, which his campaign said would feature the endorsement of black religious leaders. After backlash from members of the group who said they had no intention of endorsing Trump, the public event was scaled back to a private meeting.

None of this matters particularly as it relates to the Republican nomination process. Trump’s core supporters are not likely to be swayed by anyone’s hurt feelings, or media fact-checking of their man’s claims. And for the other three-quarters of the Republican electorate, it’s all just further proof that Trump is a risky bet.

But while Trump has been preoccupied with his own messes, the rest of the Republican field has been able to sort itself out a bit.

As polling last week showed, Power Index leaders Sens. Ted Cruz and Marco Rubio continue to consolidate their positions.  For the two candidates at the back of the pack, Ben Carson and Jeb Bush, time is growing shorter for a turnaround.

There is one candidate, however, who may yet shake up the race.

Carly Fiorina has been looking for a way back into contention. Aside from a stepped-up media presence and more engagement from her super PAC, Fiorina can only do so much to make her own luck. If she is to be viable, it will be as a candidate of opportunity.

Enter Chris Christie, the longshot contender who many suspected was running out of time for his presidential bid. A weekend endorsement from New Hampshire’s largest newspaper, though, kicked off a frenzy of national media coverage about Christie’s chances in the Granite State. Not too shabby for a guy currently running in seventh place there.

If Christie really can turn this media attention into a New Hampshire boomlet, it will prolong his presence in the race. That’s bad news for both Bush and Ohio Gov. John Kasich, who have their own plans to revive flagging candidacies with strong New Hampshire showings. Even if Kasich bails out soon, Bush needs to be the only comeback kid to have any chance of revival.

Other than Cruz and Rubio, who stands to benefit most from the three-man gubernatorial dogpile in New Hampshire? Fiorina, of course. She remains one of the best-liked GOP contenders, and if there’s going to be an opening for a Rubio alternative among establishmentarians, Fiorina could fit the bill.

Much like, Mitt Romney in 2008 she could make a late play for the nomination if the frontrunner falters.

[Watch Fox: Chris Stirewalt joins “The Real Story with Gretchen Carlson” in the 2 p.m. ET hour with the latest on who’s up and who’s down in the 2016 Power Index.]

What would you say? - Give us your take on the 2016 Power Index. We will share the best and brightest with the whole class. Send your thoughts to FOXNEWSFIRST@FOXNEWS.COM

[Molly Ball explains that Trump isn’t doing anything more complicated than following the first rule of salesmanship: Give the people what they want.]

Cruz reiterates support for a potential path to citizenship for illegals - NBC News: “Cruz refused to take off the table his own support of a potential path to legal status despite his cries against ‘amnesty.’ ‘Let’s demonstrate we can stop illegal immigration, we can protect our national security interests, we can protect our law enforcement interests,’ Cruz said after a campaign stop in Newton, Iowa. ‘Then once that’s done, we can have a conversation at that point about whatever people remain here illegally.’”

Rubio snags Issa’s backing - Rep. Darrell Issa, R-Calif., endorsed Sen. Marco Rubio on “Fox & Friends” this morning. Issa said, “He saved us money on Obamacare where others have simply wanted to repeal it. He has already saved $2.5 billion by eliminating an unreasonable backstop by the taxpayers for a failed program. He’s been fighting for a lot of things I believe in.” Watch here.

On trip to region, Carson says Syrian refugees don’t want to come to U.S. - NYP: “Speaking from neighboring Jordan, where he met this weekend with Syrians staying in temporary shelters, Carson said he asked the refugees what the United States should do. ‘I was a little bit surprised with the answer, because it wasn’t what we’re hearing a lot,’ he said. ‘We’re hearing that they all want to come here to the United States. And that’s not what they want.’ The United States should focus on building up refugee facilities in Jordan rather than accepting refugees and exposing America to a ‘population that could be infiltrated with terrorists who want to destroy us,’ he said.”

Christie tries to capitalize on paper’s endorsement - Asbury Park Press:  “Gov. Chris Christie, fresh off the endorsement of a key newspaper in New Hampshire, begins a two-day campaign visit to the first-in-the-nation primary state. He’ll have a business roundtable luncheon at noon in Portsmouth, where he’ll be endorsed by prominent commercial real estate developers and Republican activists Renee and Dan Plummer; unveil a law-enforcement coalition, 4:30 p.m. in Concord; and hold a town-hall meeting, 6 p.m. at the Loudon Fire Department.”

WILL GOP GET THE RAP FOR COLO. SHOOTING?
As new details emerge from Friday’s shooting at a Colorado Planned Parenthood abortion clinic much of the media focus has shifted to blaming Republicans and their unstinting opposition to federal funding for the organization. But Ben Domenech argues it won’t work: “And third — and this is where things get Alanis Morrissette chaotic Paladin-level ironic — this frame will not work because the media was so successful at squashing the very story they now cite as the source of [the shooter’s] rage: the series of undercover videos, which have depicted behind-the-scenes activities and conversations at Planned Parenthood facilities across the country and with their top ranking officials, showing them engaging in legally questionable and ethically vile behavior, even to the point of negotiating the sale of baby parts for profit.”

WITH YOUR SECOND CUP OF COFFEE…
As many cooks discovered last week, turkeys can be aggravating creatures. But the father of American literature, Mark Twain, knew that was especially true of live turkeys. Twain was born as Samuel Clemens 180 years ago today in the village of Florida, Mo. ("The village contained a hundred people and I increased the population by 1 per cent,” Twain would later write. “It is more than many of the best men in history could have done for a town.”) Twain’s youthful encounter with a turkey hen in the Missouri woods was the origin of what would be among his finest, funniest yarns. “Hunting the Deceitful Turkey,” first published in 1906, is of course more about human foibles than those of game fowl:

“When a person is ignorant and confiding, this immoral device can have tiresome results. I followed an ostensibly lame turkey over a considerable part of the United States one morning, because I believed in her and could not think she would deceive a mere boy, and one who was trusting her and considering her honest.”

You can read the whole thing here.

DOORS OPEN TO DONORS AT HILLARY’S STATE DEPARTMENT
As Secretary of State, Hillary Clinton welcomed donors to her party and her family’s foundation to use her office as a “sounding board for their interests,” according to State Department calendars. The AP describes: “[Clinton] met or spoke by phone with nearly 100 corporate executives and long-time Clinton political and charity donors during her four years at the State Department between 2009 and 2013, records show…Her availability to luminaries from politics, business and charity shows the extent to which her office became a sounding board for their interests. And her ties with so many familiar faces from those intersecting worlds were complicated by their lucrative financial largess and political support over the years -- even during her State Department tenure -- to her campaigns, her husband’s and to her family’s foundation.”

Buffett boosts Clinton cash machine - Free Beacon: “A foundation financed by the billionaire investor Warren Buffet recently signed on as a member of the left’s leading donor club, according to internal documents, joining a handful of other new ‘partners’ who will help bankroll liberal nonprofits, advocacy groups, and political vendors ahead of the 2016 elections. The NoVo Foundation is one of 10 individual and institutional Democracy Alliance donors that have signed on this year, according to those documents. Alliance ‘partners’ are required to contribute at least $200,000 per year to the groups in its portfolio of supported organizations.”

[Clinton will stump with Buffet in Omaha on December 16, the Omaha World-Herald reports.]

DOUBLE WHAMMY FOR HILLARY ON GLOBAL WARMING
Feeling the press of the Democratic elites gathered in Paris – some of whom have made big bucks from the issue – and those among the party base for whom the issue evoked a fervor akin to religion, Hillary Clinton called for “robust American leadership” at the climate talks in a Time op-ed.

Obama won’t submit for Senate review- WaPo: “Whatever agreement emerges from Paris, [President Obama] has no intention of submitting it to the Senate for ratification as a treaty. The administration argues that any agreement does not bind the United States to a course of action. Moreover, it says the Clean Air Act and the United Nations Framework on Climate Change signed by former President George H.W. Bush already give Obama the authority he needs to carry out climate commitments.”

CHEESE TRUCK DRIVERS BEWARE…
AP: “Where’s the beef? That’s what authorities would like to know after someone stole 40,000 pounds of it from a meat plant in central Pennsylvania. State police say it happened Nov. 21 at Nicholas Meat near Loganton. According to troopers, a trucker loaded $110,000 worth of meat into a trailer during a scheduled pickup and drove off. He was supposed to deliver it by Monday to a company in Milwaukee, Wisconsin - but never showed up. A spokesman for Nicholas Meat says the customer notified him Tuesday about the missing product, which would have been enough to make 160,000 burgers. Police later discovered the driver used a fake ID to get the delivery contract. Authorities say the company information on the truck was also fraudulent. The investigation continues.”