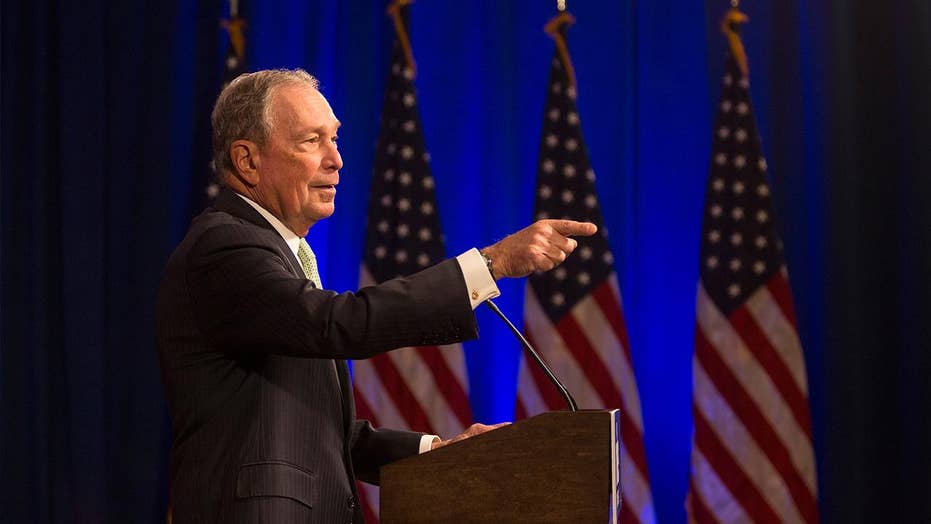 Will Bloomberg’s political advertisements pay off?

Former New York City Mayor Michael Bloomberg has become the latest entry into the 2020 Democratic primaries, in an attempt to save the flailing party from itself. It’s a big gamble for the big-spending billionaire businessman.

Bloomberg has called President Trump “incompetent,” but will need more than money to beat Trump if he can first vanquish other Democratic presidential hopefuls.

Across party lines, there are undoubtedly many in the New York City metro area who will largely remember the three-term mayor fondly, especially in comparison to the far-left administration of current mayor and failed presidential candidate Bill de Blasio.

He bought his way into elected office when he ran for mayor and he will try to do it again now. But he would do well to understand that America is not New York City.

In Bloomberg, there is an elitism, sense of entitlement and disconnect with average people that is similar to Hillary Clinton. You can’t picture Mike Bloomberg pumping gas or shopping in a supermarket.

As mayor, Bloomberg would famously often leave the city – and the country – on Friday afternoons, flying off in his jet to Bermuda to spend weekends at this home there.

When Mitt Romney was the Republican nominee for president in 2012 Democrats pounded him for having six homes. In 2014 Business Insider reported Bloomberg owned 14 properties and had HSBC bank accounts in London, Paris, Bermuda and Hong Kong.

Even more detrimental to Bloomberg’s ability to build a voter coalition is his “government knows best” attitude that will make him anathema to the voters he needs to win.

Bloomberg will be liberal enough for centrist Democrats, but the patina of independence is long gone for the mayor-turned-policy activist. Big bucks won’t manufacture appeal beyond the higher income earners and more liberal coasts that largely aren’t in play in 2020.

Bloomberg will have a hard time appealing to minorities and blue-collar Democrats, who are increasingly soft targets for Trump’s populist message about protecting workers, tax cuts, paring back regulations and fighting for the middle class.

The former mayor’s infamous New York City ban on large soda servings, restrictions on salt in restaurants and other regulations all smack of the Nanny State policies that minimize personal freedom and responsibility in favor of government intervention.

In addition, Bloomberg has pledged millions of dollars of his own money to support the Paris Climate Accords that President Trump rightly believes would cost American jobs.

Bloomberg’s positions on gun control are a decidedly big-city liberal, and he has funded advocacy for Second Amendment restrictions.

While Trump is publicly fighting Chinese trade abuses to protect American jobs, Bloomberg has defended the communist regime time and again, going as far as stating that the Chinese Communist Party is responsive to the public and that Chinese President Xi Jinping is not a dictator. “He has to satisfy his constituents or he’s not going to survive,” Bloomberg once said in an interview.

Since when do communist leaders have “constituents” other than the elites that make up the central committee? They don’t.

As mayor, Bloomberg was known for being tough on crime and an advocate for law and order, but has now disavowed the “stop-and-frisk” policies that helped drive down crime in the Big Apple. He was known for strong fiscal management, but today is better known for gun control and climate change activism that could kill middle-income jobs.

Like him or not, President Trump has spent decades developing a persona that deftly straddles the line between billionaire real estate tycoon, television star, and cheerleader for the shrinking blue-collar middle class.

Trump is a self-styled "blue-collar billionaire," far more at home hanging out with construction workers, cops, soldiers and the average American, than in the stuffy surroundings of Washington.

Yes, at times Trump does not act presidential in the traditional way, and is rough and unconventional. But for all the Beltway blowback and chatter on the coasts about Trump’s unacceptable behavior, he has exhibited an ability to speak to the American people in terms that resonate. There is part of him that’s still the kid who grew up in a small house in Queens in New York City.

Bloomberg will have a hard time appealing to minorities and blue-collar Democrats, who are increasingly soft targets for Trump’s populist message about protecting workers, tax cuts, paring back regulations and fighting for the middle class.

The former mayor’s entry into the fray for the Democratic presidential nomination lays bare just how weak and chaotic the Democratic field is and how worried traditional liberals are that the election is slipping away due to the radical left’s strength within the party.

Bloomberg could do for the Democrats what he did for New York Republicans in 2001 – close a funding gap by writing a big check.

In the end, though, if you’re going to vote for a billionaire mogul, the majority of Americans will vote for the guy who has their back, not the one talking about global climate compacts.

Countering bombast with smugness won’t work, no matter how big the check is.