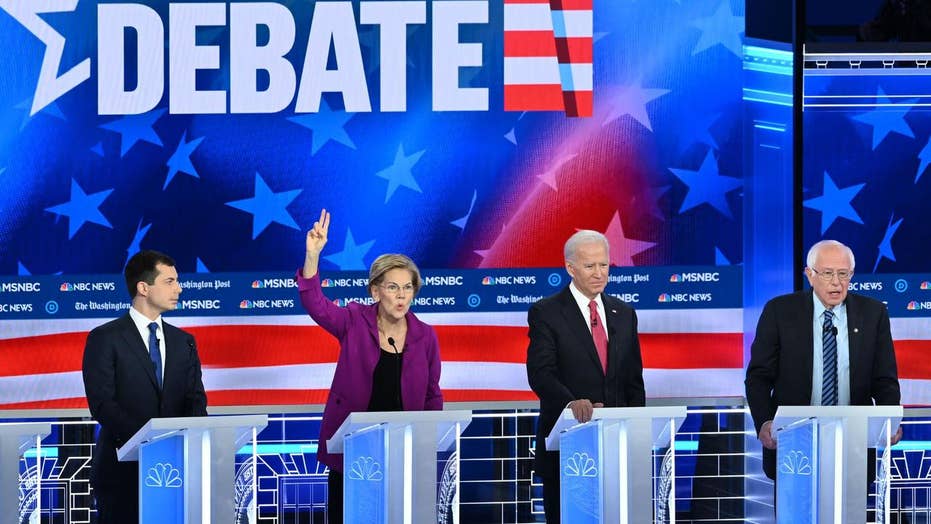 On today’s episode of The Greg Gutfeld Show, Greg Gutfeld and his guests talk about the House Impeachment hearings week in review. They also discuss the 2020 Democratic debate.

“Medicare-for-all" is growing increasingly unpopular among the American people as they learn more about this cleverly named government takeover of our health insurance system and the serious harm it would bring about, polls show.

As a result, many of the Democrats competing for their party’s presidential nomination are scrambling to soften their support for this radical restructuring of our health care system or highlighting their opposition to it.

But here’s the truth you won’t hear from the Democratic would-be presidents: Those who say they oppose a government takeover of our health insurance system are simply trying to soothe nervous moderates.

JUSTIN HASKINS: ELIZABETH WARREN IS A SOCIALIST – IF SHE'S THE DEM NOMINEE, THIS HAPPENS IN 2020

In fact, every single Democratic presidential candidate supports a brand of health care reform that will lead to "Medicare-for-all." Each just has a different timeline, with a different path on how to get to the same result.

Think of the candidates like a large number of hikers making their way through a dense forest on different trails to reach a waterfall. Some will travel quickly, others more slowly as they encounter different obstacles, but eventually all will get to the same waterfall.

"Medicare-for-all" is a radical plan to eliminate the private insurance industry and enroll every one of us in a taxpayer-funded government-run health plan – whether we like it or not. Like our income tax system, participation will be mandatory.

At this point 53 percent of Americans support “Medicare-for-all,” according to a recent Kaiser Family Foundation poll. That's down from a high of 59 percent in March 2018.

In contrast, 65 percent of Americans favor the creation of a new, government-sponsored health plan that would compete against private insurers. This so-called "public option" would allow everyone to access affordable health insurance coverage without eliminating private insurance, its supporters say.

The Democratic presidential candidates have been following public opinion. Just look at Sen. Elizabeth Warren of Massachusetts. At the first candidate debate, she proudly proclaimed she was "with Bernie on Medicare-for-all." On Nov. 1, she unveiled her wildly unrealistic plan to pay for it.

But at last week's debate in Atlanta, Warren didn't join Sanders in his full-throated defense of "Medicare-for-all." Instead, she explained how she would gradually transition to a single-payer system during her first term.

Medicare underpaid hospitals by a staggering $54 billion in 2017.  If everyone in our country were enrolled in government health insurance that $54 billion figure would grow enormously. Some hospitals would likely be forced to close.

Under Warren's plan, 135 million people would be automatically enrolled in a new Medicare-like plan right off the bat, at no cost to them.

This would include "everybody under the age of 18, everybody who has a family of four income less than $50,000," she said. Every other American would have the option to buy into the plan at a "modest" cost.

Warren promises to get "Medicare-for-all" legislation passed "no later than" her third year in office. Of course, there’s no way to know if the House and Senate would approve her grand plan, no matter how hard she tries to win its passage.

What Warren is proposing is a public option for the first three years of her term – and "Medicare-for-all" thereafter. That timeline may be unrealistic – but it may not matter. The public option would invariably result in a government takeover of health insurance.

Proponents of the public option envision reimbursing doctors and hospitals at artificially low rates dictated by the government – typically Medicare's rates, which are about 40 percent below what private insurance pays.

Today hospitals receive just 87 cents for every dollar in costs they incur caring for beneficiaries. Those pennies on the dollar add up. Medicare underpaid hospitals by a staggering $54 billion in 2017.

If everyone in our country were enrolled in government health insurance that $54 billion figure would grow enormously. Some hospitals would likely be forced to close.

Government doesn't need to worry about covering its costs. So it can set premiums for the public option below its claims costs. It can make up the difference by dipping into the federal Treasury – or raising taxes on hard-working Americans.

The public option's low-cost structure would allow it to underprice private insurers. People would understandably drop their private coverage and sign up for the cheaper public plan.

As private insurance companies lost customers to government health insurance they would be forced to raise the price of the policies they sell – driving even more people to the public option.

You get it. Eventually, everyone would move from the private insurance companies to government health insurance. The private companies would shut down and all their employees and contractors would lose their jobs.

Former Vice President Joe Biden is wrong to claim that his public option would "allow people to choose" the coverage that best suits them.

At least South Bend, Ind., Mayor Pete Buttigieg has admitted that his public option plan would "create a natural glide-path" to "Medicare-for-all." Give him points for honesty.

So far the Democratic presidential hopefuls have managed to paper over the differences between their health care plans. But the more candidates talk, the more Americans realize that "Medicare-for-all" and the "public option" are just two different blueprints for total government control.

Once private insurance companies were eliminated there would be nothing to stop the federal government from raising premiums and taxes and cutting insurance benefits. And we, the American people, would have nowhere else to turn to get needed health insurance.