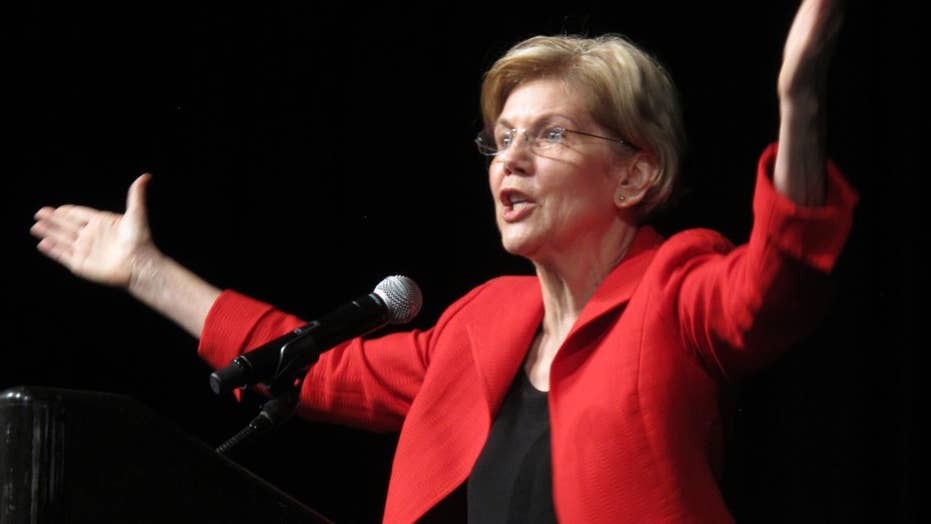 Halloween is long past, but Sen. Elizabeth Warren of Massachusetts – a leading contender for the Democratic presidential nomination – stubbornly continues to masquerade as a capitalist.

In fact, Warren’s extensive record of supporting radical policies shows beyond all doubt that she is a far-left, off-her-rocker, dyed-in-the-wool socialist.

Warren can call herself anything she wants, of course, but that doesn’t make her claim true. She is no more a capitalist than she is a Native American – another false claim she made about herself for years.

KIMBERLEY STRASSEL: ELIZABETH WARREN ADMITS TO A COLOSSAL CAMPAIGN ERROR. THIS IS WHAT SHE DID NEXT

Why is Warren hiding her socialism? Because she’s not stupid. She knows that being honest and admitting she is a socialist will scare off millions of voters – making it difficult to win the Democratic presidential nomination and likely impossible to defeat President Trump a year from now in the general election.

According to a new Heartland Institute-Rasmussen Reports survey of 1,000 likely voters, only 26 percent of Americans say they would “vote for a presidential candidate who identifies himself or herself as a socialist.” And only 12 percent said they think socialism is a “better … economic system” than a free-market system. The survey was conducted Nov. 13 and 14.

While I disagree with Sanders on just about all issues of public policy, I give him credit for admitting he’s a socialist. However, his honesty about this one issue will likely doom his presidential candidacy.

In Warren’s America, taxpayers would pay for convicted murderers and rapists to go to college (for example) and they’d be required to pay for the food, health care and education of a potentially endless stream of illegal immigrants, including people who have never worked for a single day in the United States and have contributed absolutely no tax revenue into the system.

When Sanders likely withdraws from the nominating race, most of his supporters will probably throw their backing to Warren, because the two candidates hold similar positions on most issues. That may be enough to make Warren the Democratic presidential nominee next year – a prospect that must delight Trump.

You can count on the president to label whoever the Democrats nominate to run against him as a wild-eyed socialist with crazy and dangerous ideas. In Warren’s case – just as in the case of Sanders – this description is absolutely accurate.

Warren has also endorsed Ocasio-Cortez’s “Just Society” plan. Among other completely insane parts of the Just Society is a provision that would prevent government agencies from barring convicted criminals and illegal immigrants from accessing federal welfare, health, disability, education, and other government social and welfare benefits.

In Warren and AOC’s America, taxpayers would pay for convicted murderers and rapists to go to college (for example) and they’d be required to pay for the food, health care and education of a potentially endless stream of illegal immigrants, including people who have never worked for a single day in the United States and have contributed absolutely no tax revenue into the system.

All these pie-in-the-sky schemes would cost trillions of dollars to actually implement. Even if a President Warren were to confiscate everything the richest Americans owned and left them penniless and homeless, she would still have to raise taxes on the rest of us to fund her massively expensive government expansion.

Unfortunately for Comrades Bernie and Elizabeth, the Heartland-Rasmussen survey shows that despite the mountains of positive media coverage socialism and socialist candidates have received in the past year, Americans still aren’t buying the idea that centrally planned, collective economic systems work better than free markets. And there are good reasons for that, too.

Socialist and communist parties killed, exiled or imprisoned more than 167 million people in the 20th century. The recent chaos in countries like Venezuela – where there are shortages of all sorts of consumer goods and some people have resorted to eating zoo animals to survive – has served as a reminder that whenever socialism is attempted, it inevitably results in bloodshed and economic collapse.

Meanwhile, market-based capitalist reforms in India have liberated hundreds of millions of people from extreme poverty in just the past few decades alone.

And although America’s market economy is far from perfect – due in large part to arrangements made by corrupt governments and massive corporations – it has still created a higher quality of life than anything human beings have ever experienced.

The poorest among us today live better, longer, healthier lives than billions of people around the world – including hundreds of millions living in current or former socialist nations.

But many don’t understand that what Elizabeth Warren and others are selling is – despite many the promises to the contrary – the same destructive, dangerous, disastrous ideas socialists have been peddling for more than 100 years.

If Americans figure that out, it would spell disaster for Warren, Sanders and their Democratic congressional comrades trying to keep control of the House and seize power in the Senate.