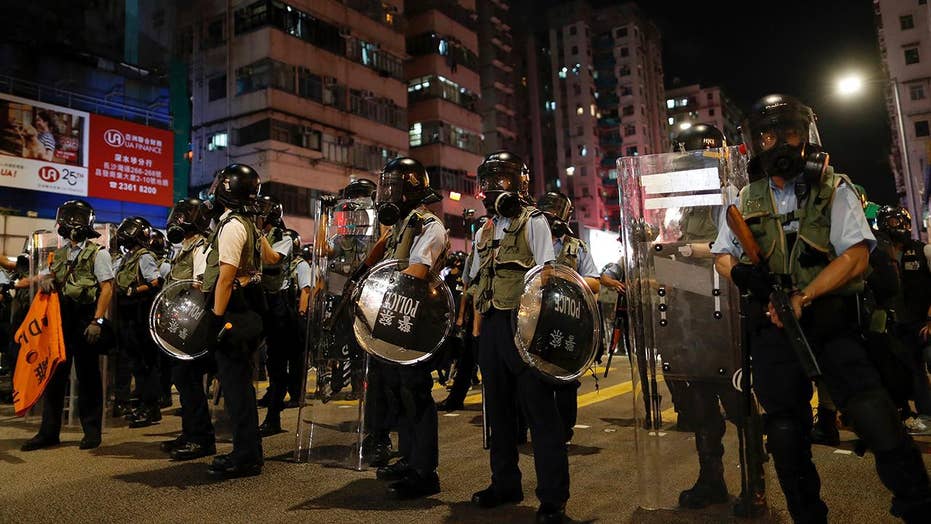 US urges China to refrain from violence amid Hong Kong protests

US says protesters have legitimate concerns; Kevin Corker has the details.

Over the past two months, the world has seen the people of Hong Kong bravely stand up to the growing threat of totalitarianism.

What began as a protest against a bill that would allow prisoners to be extradited to mainland China has evolved into a movement to demand that the Hong Kong government (largely now controlled by China’s Communist Party) adhere to the promises of freedom and autonomy it made when Hong Kong was returned to China in 1997.

Protesters have flooded the streets since June – despite the threat of being arrested, smothered with tear gas, pelted with rubber bullets or attacked by masked thugs with batons.

While Chinese tanks have lined up along the border of Hong Kong and mainland China, protesters have waved the American flag and sung the American national anthem. The protesters show no signs of wavering and the outcome remains in doubt.

But one thing is certain: The United States and the free world are watching.

To successfully counter this threat, a unified American response is critical.  I am glad to see our leaders are currently in agreement.

Senate Majority Leader Mitch McConnell, R-Ky., said that “any violent crackdown would be completely unacceptable. … The world is watching.”

Chinese leaders must know there will be consequences if the freedoms promised to the people of Hong Kong are eradicated by a Communist dictatorship.

House Speaker Nancy Pelosi, D-Calif., tweeted that Congress stands “united with the people of Hong Kong in demanding their right to a hopeful, free and democratic future.”

Senate Minority Leader Chuck Schumer, D-N.Y., echoed Pelosi, saying, “America stands with the people of Hong Kong in their protest against this abuse of power by the government of Beijing.”

The American people are starting to recognize the challenge that a Communist-ruled China poses to the U.S. A recent Pew poll found that Americans are increasingly skeptical of the Chinese Communist Party’s actions, with 60 percent of respondents reporting unfavorable views of China. This is the highest percentage in the 14 years that Pew has posed this question.

As American opposition to the Chinese tactics grows, it is up to government and industry leaders to begin asking and answering tough questions:

The Trump administration has taken a hardline stance against the Chinese Communist Party’s aggressive tactics, but this challenge is far from over. In fact, it is just beginning.

I don’t believe this has to evolve into any sort of military conflict. But President Trump’s tariffs on China are just one of many ways we can make China's leaders regret their bad behavior.

The United States now has an opportunity to send a strong message to Beijing.  We can start by passing the Hong Kong Human Rights and Democracy Act. This bill was introduced by Rep. Christopher Smith, R-N.J., in the House and Sen. Marco Rubio R-Fla., in the Senate, and would hold officials in Hong Kong and China accountable for the suppression of freedoms and human rights in Hong Kong.

America must stand with the people of Hong Kong and the legacy of freedom they are trying to protect. If America cannot effectively respond as a nation against the Chinese Communist Party’s attempts to stamp out freedom in Hong Kong, we will be hard-pressed to counter Chinese aggression in the U.S. and around the world.