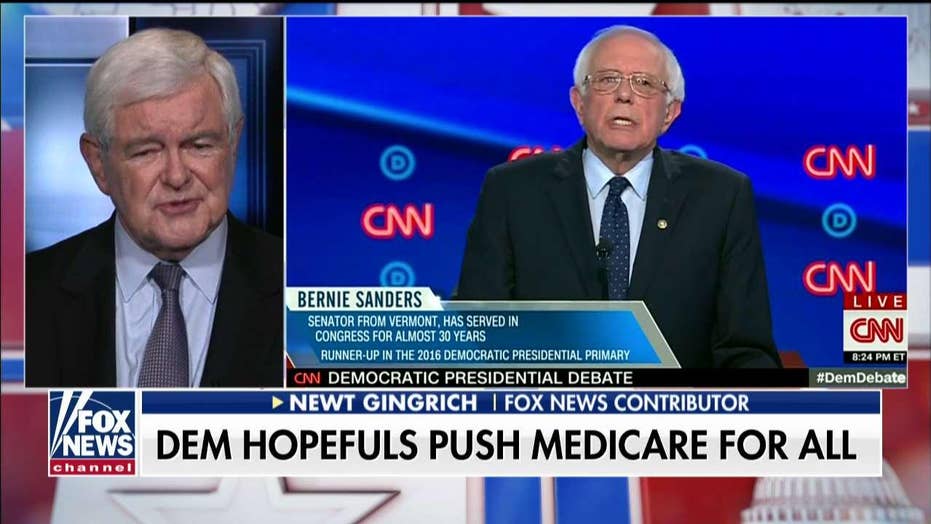 As I watched the Democratic presidential candidate debates this week, something struck me that I believe will prove important in 2020: The candidates have nothing they can defend and nothing tangible to attack.

The American economy is in great shape. Unemployment remains incredibly low – historically low for African-Americans and Latinos, in fact. And despite clear hurdles, Republicans have been taking proactive steps to fix the biggest problems in health care – consistently the No. 1 issue on the minds of Americans.

So the Democrats have been aggressively on offense and pulling from the radical left’s playbook. What they seem not to realize is that most of the American people aren’t with them.

Consider the comments of Sen. Elizabeth Warren of Massachusetts in her debate this week.

Warren said: "We need to call out white supremacy for what it is – domestic terrorism – and it poses a threat to the United States of America… We live in a country now where the president is advancing environmental racism, economic racism, criminal justice racism, health care racism. The way we do better is to fight back and show something better."

Recall that this is a candidate who lied about her own ethnicity to advance her career. Then couple this with recent calls by Warren and other Democrats to tax Americans to pay reparations for slavery based on genealogical tests.

Slavery was indeed a horrible, un-American institution in our nation’s history – but no one alive today was a slave or a slave owner.

The Democratic candidates are using this aggressive, radical language and name-calling because it fires up their base, and they’ve got nothing left to attack, except for occasional comments from President Trump that they distort.

The Democratic candidates are using this aggressive, radical language and name-calling because it fires up their base, and they’ve got nothing left to attack, except for occasional comments from President Trump that they distort.

It’s too hard for the Democratic candidates to come to grips with the fact that the report by Special Counsel Robert Mueller failed to strike a blow that hurt President Trump. So calling everyone and everything racist gets them applause from diehard audiences and helps the candidates to avoid thinking.

Meanwhile – when they aren’t declaring American tradition, history, and culture inherently racist – the Democrats are promoting open borders, free health care for people who enter our country illegally, the end of private insurance and choice in health care, and the death of our economy through fanatical environmental regulations.

I suspect all these ideas get 15 to 20 percent approval when you take them nationwide. But in their mania (which is bolstered by much of the mainstream media and liberal echo chambers) the Democrats are dragging themselves further and further to the left.

As I’ve mentioned before, I believe we are heading toward another Nixon-McGovern-style landslide.

When Richard Nixon won the presidency in 1968, many on the left were convinced the Democrats needed to go as radically left-wing as they thought Nixon was right-wing. They nominated Sen. George McGovern of South Dakota, who was exactly the kind of radical they believed they needed.

In 1972, Nixon won with more than 60 percent of the vote – the most in modern history. The McGovern movement had completely alienated most Americans.

Similarly, the Democrats today are on track to nominate the most radical candidate they can in 2020. Watch as the few moderate, center-left candidates in the massive field become more and more marginalized.

Because of this, the big winner of the two nights of Democratic debates this week was President Trump. The Democrats are unbelievably invested in adopting policies and creating a country that average Americans simply don’t want.

The potential for a Trump landslide in 2020 is growing by the day.