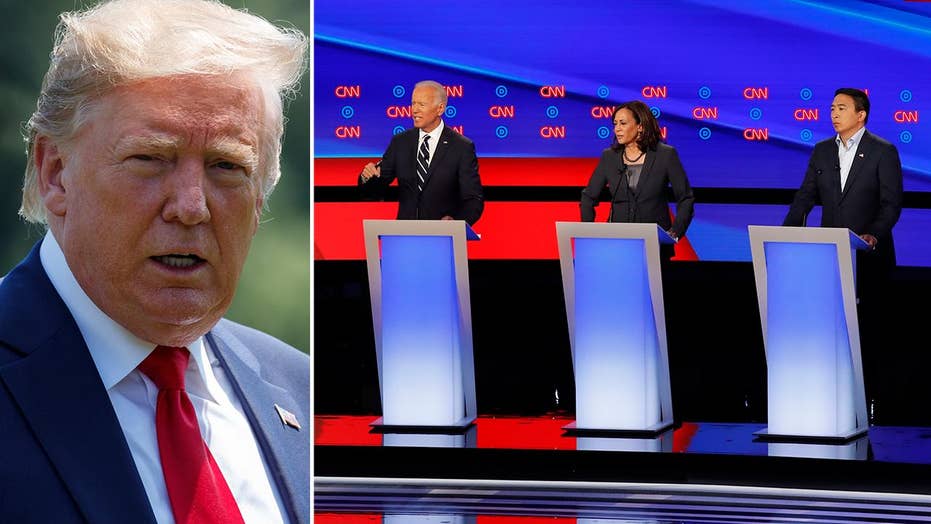 Trump takes to Twitter in response to the second round of Democratic presidential debates; Kevin Corke reports from the White House.

Discussion of foreign policy and national security issues was strikingly limited in the two Democratic presidential candidate debates this week in Detroit. Yet the most important role of any president is to be commander in chief of our armed forces and to oversee U.S. foreign policy.

Because so little was said about these vital issues, it’s impossible to say if any of the 20 candidates on stage over two nights passed the commander in chief test. But nothing jumped out to indicate that any of these men and women would pass the test or would do better than President Trump.

Of course, being president of the United States is a job like no other. President George W. Bush thought domestic issues would dominate his time in the White House – and then the Sept. 11, 2001 terrorist attacks dramatically changed the focus of his administration on one horrific morning.

Barack Obama had served only four years in the U.S. Senate before he became president. Donald Trump had never served in elected office or held any job in government before moving into the White House. Neither man ever served in the military.

Yet both Obama and Trump quickly found their days consumed with Afghanistan, Iraq, North Korea, China, Russia, the Middle East and a host of international and defense challenges.

On paper, former Vice President Joe Biden has the best credentials of any of the Democrats now running for president to be commander in chief of the armed forces. He was Obama’s vice president for eight years and dealt with many foreign policy and national security issues.

Biden has criticized the “manufactured crises” of the Trump administration, accused Trump of deferring to Russian President Vladimir Putin in Helsinki, and called Trump incompetent. Yet on foreign policy Biden prefers verbs like “remind” and “restore.” And Biden struggles on the debate stage to look and sound like a leader.

Not all the Democrats agree on every foreign policy and national security issue, of course. But in the debates, there was general agreement among those who expressed views that: U.S. troops should be withdrawn from Afghanistan; America should not engage in “endless wars;” we should return to the Iran nuclear deal; we should make combatting climate change a priority and return to the Paris Climate Accords; and the president should not conduct foreign policy via tweet.

Even when issues involving the military arose in the debates, some candidates – such as Sen. Elizabeth Warren of Massachusetts – ran back to progressive, domestic themes that have dominated their campaigns but don’t help voters picture them as commander in chief.

Two young veterans bring compelling experiences to the presidential race, but their military service alone doesn’t mean they are the best suited to be in charge of the Pentagon and our national security.

Rep. Tulsi Gabbard of Hawaii is a major in the Army National Guard who served two tours in the Middle East, including one near Balad Air Base in Iraq in 2005, known at the time as “Mortaritaville” due to the frequent Iraqi insurgent shelling. That’s tough duty, and Gabbard was there for a year.

Sadly, her larger policy statements can sound confusing. Gabbard says Washington is “wasting trillions of dollars and countless lives in regime change wars and a new cold war.”  Her debate closing statement described a nuclear attack on Detroit. Oh my.

South Bend, Ind., Mayor Pete Buttigieg served in the Navy Reserve. He was in his first term as mayor when he deployed to Kabul, Afghanistan in 2014 to disrupt insurgent finance networks. Understandably, Buttigieg wants U.S. forces out of Afghanistan in his first year in the White House if he is electe

However, in June, Buttigieg told The Atlantic he would not have launched the retaliatory missile strikes after Syria’s 2013 chemical weapons attack. Huh?

He also believes China is filling a vacuum left by America’s withdrawal from the world – yet ironically, China in its just-released defense strategy accuses the U.S. of having too many alliances.

As a group, these would-be commanders in chief don’t like defense contractors who provide America’s technology edge.

Democratic socialist Sen. Bernie Sanders of Vermont jumped in during his debate to say defense contractors couldn’t “line up at the trough” in a Sanders administration.

“They ain’t going to get those contracts” unless they treat American workers right, Sanders said.

Warren said in November that if she were president she would end “the stranglehold of defense contractors on our military policy.”

“Our military is the best in the world,” said Warren, but it shouldn’t be asked to take on problems without military solutions.

If only she’d stopped there. In her debate this week Warren got tangled up in nuclear policy. She said the U.S. would never be the first to use nuclear weapons if she were president.

Warren said that if the U.S. retains the right to use a nuclear weapon first, it “puts the entire world at risk and puts us at risk.”

In fact, nuclear deterrence has been U.S. policy since soon after the Soviet Union announced it had developed the atomic bomb August 1949, just a few weeks after Warren was born. This policy is credited by many with securing Europe and preventing nuclear war. It remains NATO’s bedrock.

Meanwhile, Sanders proposed outsourcing some of the toughest policy challenges in the world to the United Nations, where getting agreement on anything is difficult and where China and Russia have veto power. He said in his Detroit debate that “the United States cannot be the policeman of the world.”

While the Democratic presidential contenders have turned rhetoric against President Trump, they are still struggling to deliver a rallying call for America’s national security.

Granted, the presidential campaign is still in its early days. Candidates like Sens. Kamala Harris of California and Cory Booker of New Jersey have yet to make a major foreign policy speech.

Others, like Sen. Kirsten Gillibrand of New York, have made sound statements but downplayed national security in the “getting to know you” phase of their campaigns.

That might be a mistake. Agree or disagree with them, you have to concede that Obama and Trump both showed their commander in chief instincts early on.

Obama differentiated his 2008 campaign from Hillary Clinton’s with his pledge to get out of Iraq. In 2016, Trump made winning the anti-ISIS fight a campaign pledge. “We have to, we have no choice,” Trump repeatedly said.

And it worked with voters. The current crop of Democratic candidates eyeing 2020 should start finding their commander in chief voice now.