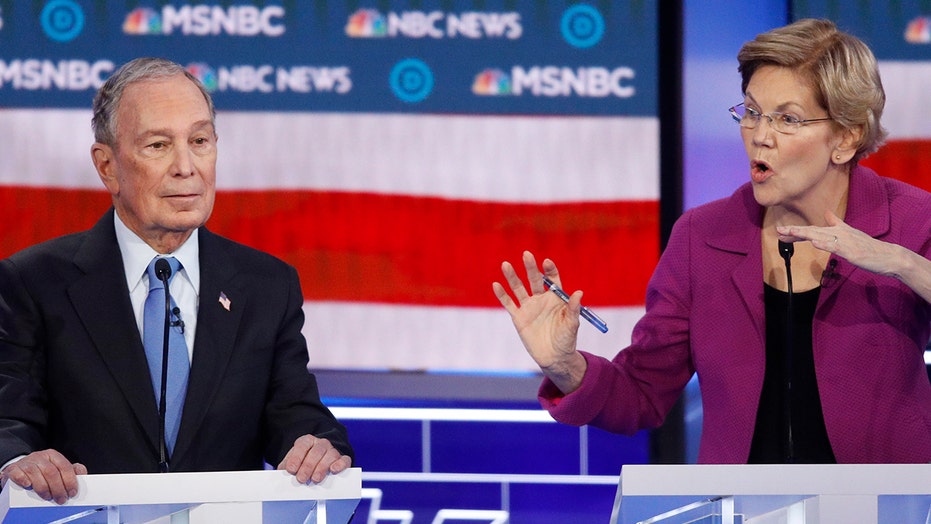 Sen. Elizabeth Warren vowed that the former New York City mayor and multibillionaire Michael Bloomberg is ‘not going to be our candidate for president of the United States of America;’ Peter Doocy reports.

The biggest winner was President Trump.

There is a huge stature gap between the president’s recent speeches and rallies and the petty bickering and bitter attacks we saw on the debate stage. It will be easy for voters to differentiate the powerful incumbent and the confused, tiny opponents yammering in the background.

When Bloomberg said that Sanders would be a disaster in the general election, he gave the Trump reelection campaign a perfect ad for this fall if Sanders is the Democratic presidential nominee.

Every time the Democrats describe their more radical positions they further isolate themselves from the independent voters and moderate Democrats they need to defeat Trump in November.

The more you listen to the Democratic presidential candidates, the more you realize just how radical they have become. Real moderates have been driven from leadership positions and only exist on the sidelines as fossilized reminders of the Democratic Party that used to exist.

I’m not alone in this assessment. Several Democratic analysts watching the mess on stage said the big winner was President Trump. They were right.

The second big winner was Sanders. He won more votes in Iowa than anyone else. A fluke in the weird way Iowa counts delegates allowed Buttigieg to claim more state-level delegates, but the fact is that Sanders got more votes.

Sanders came in first in New Hampshire. Given the size of the crowds he is getting – and the recent polls – there is a good chance Sanders will win the Nevada caucuses Saturday.

The next major test for Sanders will be South Carolina a week later. The most recent polls show him within two points of Biden, who now is the front-runner in the state.

Since South Carolina is Biden’s supposed firewall, where his expected support from African-Americans is going to keep him in the race, it will be a catastrophic outcome for the former vice president if he finishes only one or two points ahead of Sanders.

And since there is plenty of time for people to digest the Nevada results, it is conceivable that a Sanders victory there will propel him to victory in South Carolina over Biden.

Further, if Sanders wins Nevada his national front-runner status will be so formidable that the other candidates may have to shift their attacks from Bloomberg to Sanders in the upcoming debate Tuesday in Charleston, S.C.

This position of strength means you have to score Sanders as the other winner in the Wednesday night debate in Las Vegas. Other than Bloomberg asserting that Sanders can’t win, no one really laid a glove on Sanders.

The intensely personal Buttigieg-Klobuchar exchange weakened both of them. By definition, this helped Sanders.

Every time Warren hammered Bloomberg, Sanders must have been smiling to himself. As a seasoned veteran, Bernie must have stood there and watched in amazement as his competitors gave him a pass and fought each other.

So if the president and the socialist had a good night, who was the big loser?

Well, Bloomberg was the most battered. Klobuchar and Buttigieg were the most childish. Warren was the most effective as the rage candidate, but she was ineffective at drawing votes to herself (rage drives people away, it doesn’t attract them). And Biden had a decent but inadequate night.

Clearly, the big loser was the Democratic Party.

Coming after the absurdity of the Iowa caucus meltdown – and with warnings that Nevada may also have counting problems – the Democrats do not need to look incompetent or deeply divided. Yet, incompetent division is exactly what came out of the Nevada debate.

It is a falsehood for the national media to suggest that any of the Democratic presidential candidates are moderates. They all espouse positions that are opposed by a substantial majority of Americans.

All the Democratic candidates represent an elite left-wing cultural view that believes America is a bad country of ignorant “deplorables.” They all believe their mission is to use government to profoundly change America – even if it is against the wishes of many millions of Americans.

At the same time, this radical Democratic Party proved Wednesday night that it has no coherent policy for creating jobs, solving problems or defending America.

This is why the Democratic Party was the big loser.