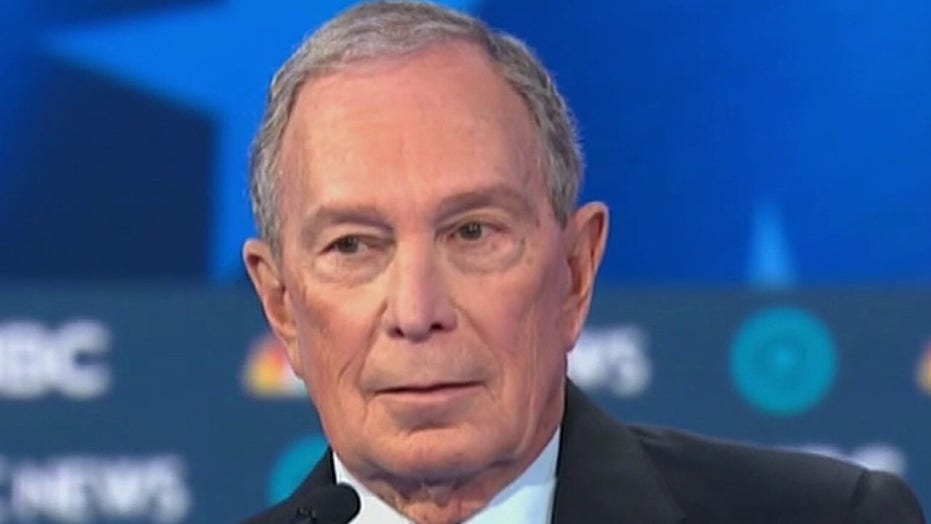 Former New York City Mayor Michael Bloomberg is under fire by members of the mainstream media for sharing what has been described as a "deceptively edited" clip clearly mocking his 2020 rivals at the Democratic debate.

During Wednesday night's showdown, Bloomberg was the target of several attacks, but the moment he touted his own business background had his opponents speechless.

"Maybe you want to talk about businesses. I think I'm the only one here who ever started a business, is that fair?" Bloomberg looked over at his opponents, none of whom responded.

A moment later, Bloomberg quipped, "OK" and carried on with his remarks.

Bloomberg had some fun on Thursday morning at the expense of his Democratic rivals and shared a clip of that exchanged but overtly embellished the response from the others on the debate stage, showing blank facial expressions from Sen. Elizabeth Warren, D-Mass., Sen. Bernie Sanders, I-Vt., former Vice President Joe Biden, former South Bend, Ind., Mayor Pete Buttigieg, and Sen. Amy Klobuchar, D-Minn., over a lengthy 20 seconds with the sounds of crickets being heard throughout.

However, some from the mainstream media sounded the alarm.

"This is pretty wild: After Mike Bloomberg bombed at the debate last night, his campaign cut a deceptive video to make it look like he did well," Politico reporter Holly Otterbein reacted.

"This was edited to make it look like there was several seconds of silence after Bloomberg asked if any other candidate started a business. Similar to Trump's edited video of Pelosi ripping up the SOTU speech. Facebook and Twitter were fine with the latter," CNBC technology editor Steve Kovach alerted those who couldn't determine if the clip was satirical.

"This edit is a lie," BuzzFeed News politics reporter Dominic Holden exclaimed, "Bloomberg’s video shows he asks if anyone else on stage has started a business and a full 20 seconds pass in silence. in reality, Bloomberg kept talking after a second and the rest let him."

"He's making another mistake. His campaign making another big one today and that is there's a video that his campaign tweeted this morning, it's gotten a million views -- that didn't happen," CNN chief political correspondent Dana Bash said. "It is a deceptively edited video."

"His campaign is saying, 'C'mon, it was tongue-in-cheek,' but in today's day and age where we are so concerned about things that are doctored, deep fakes on the Internet," Bash said.

Others mocked the media's panic of the comical video.

"GUYS THIS IS DECEPTIVELY EDITED IT'S NOT REAL AND IT IS VERY BAD PEOPLE MIGHT THING IT IS REAL EVEN THOUGH THERE ARE CRICKET SOUND EFFECTS AND A TWENTY SECOND BREAK OF SILENCE IN THE MIDDLE OF A DEBATE AND YOU WOULD HAVE TO BE A MORON TO THINK IT IS REAL... RED ALERT FACT CHECKERS RED ALERT, FIREFIGHTERS, TO YOUR STATIONS!," conservative commentator Ben Shapiro joked.

"Wait. A #Democrat being deceptive? They all lie with 'hello,' and it usually goes on from there, so honestly where’s the surprise here? And by the way thanks for the delicious irony of spreading this video yourself!" actor James Woods tweeted.

There was similar outrage expressed by the media after President Trump shared an edited clip of Speaker Nancy Pelosi, D-Calif., repeatedly ripping his State of the Union speech while juxtaposed with images of some of his guests of honor including a military family, the young scholarship recipient, and conservative radio show host Rush Limbaugh, who received the Presidential Medal of Freedom after he had announced he was diagnosed with advanced lung cancer.