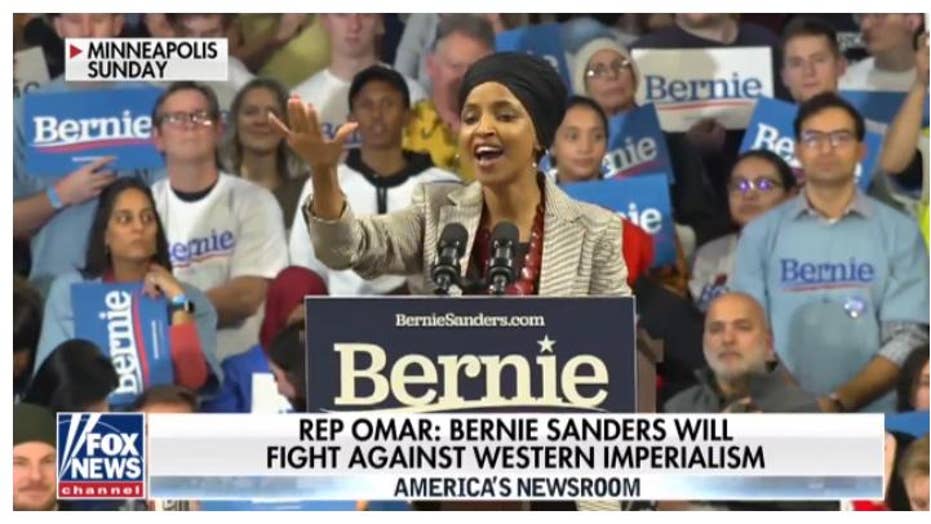 How can one person get so much wrong in one sentence? I refer to Rep. IIhan Omar, the neo-socialist Democrat, who endorsed presidential candidate Sen. Bernie Sanders with these words: “I am beyond honored and excited for a president who will fight against Western imperialism and fight for a just world.”

“Western imperialism”? Wrong. Omar should know that the real imperialism of our age comes from the East. Communist China brutally suppressed the Buddhist religion and people of Tibet, killing thousands of monks and destroying hundreds of temples. The Chinese imperialists have placed an estimated 1 million Uighurs (her Muslim co-religionists) in reeducation camps. In 1989, the Chinese imperialists murdered hundreds of Chinese students who were demonstrating in Tiananmen Square for a more “just world.”

The imperialist regime in Beijing has also warned the pro-freedom demonstrators in Hong Kong not to try their patience and directed the democratically elected leaders of Taiwan to stop talking about independence from mainland China.

MARC THIESSEN: EVILS OF SOCIALISM MUST BE TAUGHT TO YOUNG PEOPLE

What about “Russian imperialism”? The Putin regime seized the Crimean Peninsula, occupied two provinces of its neighbor Georgia, and initiated a conflict with Ukraine. It has also stepped up its military activities off the coasts of Estonia and the other Baltic states.

Let’s not forget its forerunner, “Soviet imperialism.” Following World War II, the Kremlin lowered an Iron Curtain that turned 100 million people in Eastern and Central Europe into vassals of the Soviet empire for four decades.

In stark contrast, after World War II, the United States did not try to transform Germany and Japan into its colonies — as past conquerors did — but set about restoring the economic strength and political independence of the nations it had defeated. As the political analyst Tom Rogan pointed out, Western imperialism died with the Suez Crisis of 1956. And who forced Great Britain and France to abandon their colonial attempt to control the Suez Canal? The United States.

Omar should pick up a good history book—say “Modern Times” by Paul Johnson — and find out the facts about the different kinds of imperialism in the 20th century. She will learn that the United States has resisted imperialism in all its forms – from Soviet to Chinese to Iraqi (remember the invasion of Kuwait?) to Russian.

She will learn that the United States led the effort to create a more just and peaceful world through defensive alliances like NATO, economic arrangements like Bretton Woods, strategic plans like the Truman Doctrine, and national sacrifices like the Korean War, which saved South Korea from North Korean tyranny and imperialism.

She will learn that in pursuit of their goal to communize the world, the Soviet Union and its comrades were responsible for the deaths of 100 million victims. They used show trials and firing squads, the Gulag and forced famine, and other deadly means to satisfy their imperialist lust. Again in contrast, the United States and its Western allies stopped and then erased Soviet imperialism through a variety of strategic, military, economic and psychological measures.

Today’s world would be a far different place if the U.S had not waged and won —at the cost of tens of thousands of lives and many billions of dollars — the Cold War, a war made necessary by the imperialist ambitions of the Soviet Union and its minions.

The truth about Soviet imperialism, the deadliest imperialism of the 20th century, is that it was born in Moscow, nurtured in Beijing, Havana, Hanoi and other communist capitals and suffered its demise when confronted by Ronald Reagan, a U.S. president who summed up his winning strategy with four little words, “We win, they lose.”

Lee Edwards, Ph.D., is the Distinguished Fellow in Conservative Thought in the B. Kenneth Simon Center for Principles and Politics at The Heritage Foundation.