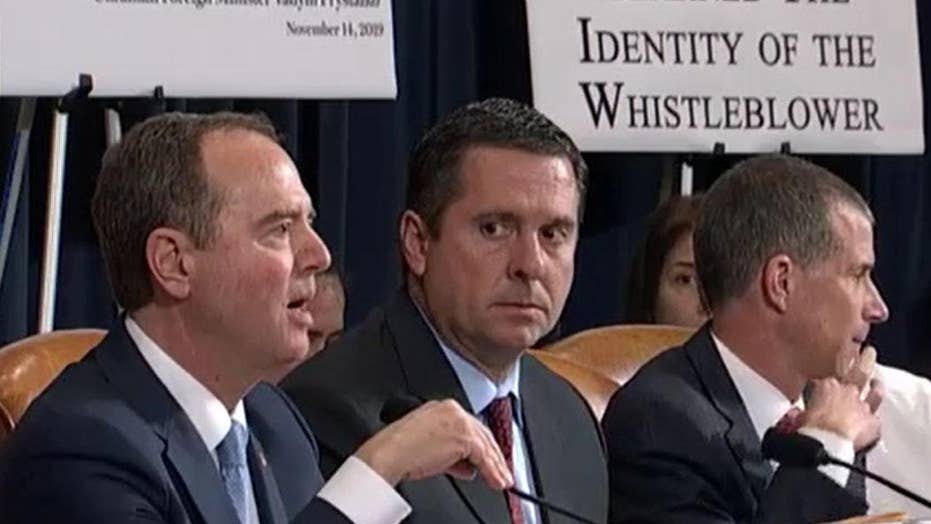 Adam Schiff cuts off Elise Stefanik, refusing to recognize her

I have been told that Democrats are looking for a way out of the impeachment of President Trump. They want to act out in the House against the president but they know that, based on the evidence as it exists, they have a lot to lose by overplaying their hand because of the public’s disinterest and disgust at impeachment and the holding of a trial for removal of the president so close to an election and in the midst of a Democrat primary.

If the Democrats do not want to go the impeachment route, what’s the next best way they can show their disdain of the president, claim victory and move on? Censure by the House is the only exit strategy that affords Democrats that option.

Censure is a formal, and public, group condemnation of an individual whose actions run counter to acceptable standards for individual behavior as defined by the party doing the rebuking. In the United States, governmental censure is done when a body's members wish to publicly and formally reprimand the president, a member of Congress, a judge or a cabinet member.

The U.S. Constitution specifically grants impeachment and conviction powers, respectively, to the House of Representatives and Senate; however, it does not mention censure. Congress adopted a resolution allowing censure, which is "stronger than a simple rebuke, but not as strong as expulsion." In general, each house of Congress is responsible for invoking censure against its own members; censure against other government officials is not common.

Because censure is not specifically mentioned in the Constitution as the enumerated form of reprimand, many censure actions are seen as purely political actions and the force, effect and taint is determined by the vote itself. Who voted for censure and who did not will ultimately define the effect of censure. You can bet that such a vote by the House would be strictly partisan.

If Democrats go forward with an impeachment vote they have to do it before the Christmas recess in order for the Senate to begin to deal with a trial for removal of the president in the new year.

The alternative would be for Democrats in the House to continue damaging the president through December, but shut down their impeachment inquiry just before recess and shift to a two-day censure of Trump. This would allow each Democrat member the ability to denounce the president, essentially stating “Impeachment is not in the country’s interest since it is clear Republicans in the Senate in a new year will drag out a trial and never convict the president. We believe we have set forth enough evidence for the American people to weigh in the election for president in 2020 and we will continue to make our case up to and through Nov. 3, 2020, that the president is not fit for a second term.”

Democrats have a golden opportunity to exit impeachment during the holiday season when the American people are not paying close attention to politics.

The down side of censure is that it would be a huge victory for the president. The Democrats’ second shot at taking him down will have failed. They lost with the Mueller report and now they have lost at impeachment. Trump will rightfully crow all over the place that he was the victim of yet another “witch-hunt.”

But there are up sides. First, Democrats have a golden opportunity to exit impeachment during the holiday season when the American people are not paying close attention to politics.

Also, censure would benefit the six U.S. senators running for president whose attendance would be required for an impeachment trial. They can’t be jurors and presidential candidates at the same time. They would be forced to abandon their campaigns and fundraising efforts through the duration of a trial. The most important caucus and primary states are the first ones -- Iowa, New Hampshire, Nevada and South Carolina -- and those contests would likely occur smack dab in the middle of the Senate trial.

Knowing the Senate will never convict, it is a fool’s errand for House Democrats to insist on a trial that would sideline their top tier candidates for president.

Adding to the chaos will be the traditional “State of the Union Address” by the president in late January. In the midst of a Senate trial for his removal, Trump would be addressing his accusers and jurors in a joint session of Congress.

By overreaching, House Democrats have put themselves in a bind with no good options. They lose with censure or impeachment. They must pick the lesser of two evils.

You can’t hate a president out of office. You have to vote him out.

The people will decide. They always have the ultimate say.