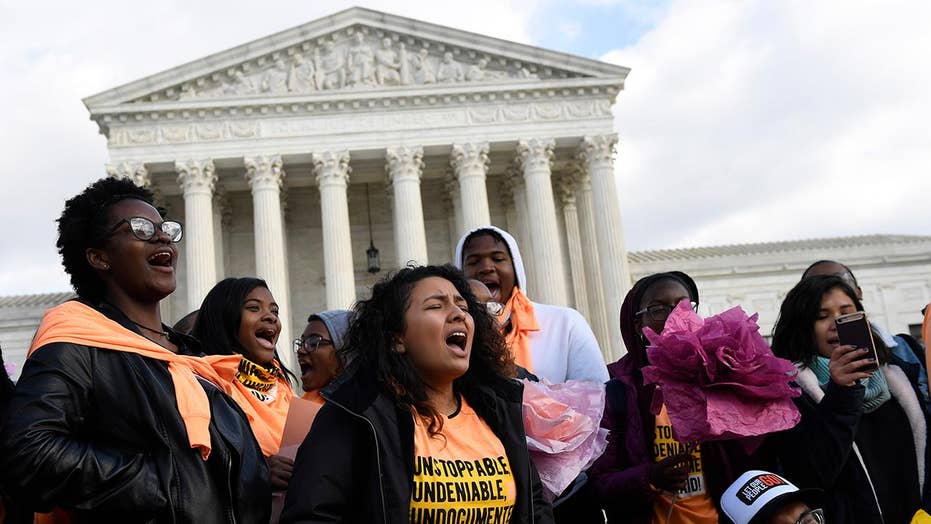 DACA recipients have their case heard at Supreme Court

During upcoming weeks and months, conservatives have an opportunity to do the right thing by enacting restitution-based immigration reform legislation that will secure our borders, deport dangerous immigrants, allow temporary documentation for immigrants willing to pay significant fine, and protect innocent Dreamers.

We should act now because it is the right thing to do, it is good for American workers, and upcoming weeks are crucial to accomplishing our long-term goals.

To that end, and as a response to the Southern Baptist Convention’s 2018 resolution on immigration reform, a substantial number of prominent evangelical leaders released the "Evangelical Call for Restitution-Based Immigration Reform" this month.

TOM HOMAN: LAWMAKERS WANT CALIFORNIA TO IGNORE IMMIGRATION LAWS, AS IF IT WERE AN INDEPENDENT NATION

The proposal is based on Christian teaching about the necessity of upholding the rule of law in a humane manner.

By passing restitution-based immigration legislation, Congress will be doing the right thing.

First, Congress must reject amnesty-based proposals, which disrespect and diminish the rule of law.

Over the past several decades U.S. lawmakers and authorities have neglected to secure our nation’s borders. They’ve spoken out of both sides of their mouths.

On the one hand, they’ve kept immigration laws on the books. On the other hand, out of a combination of negligence, lack of enforcement, and corruption, we’ve essentially winked as millions of undocumented immigrants have entered unlawfully and taken residence within our borders.

In other words, we’ve sent the message: “Even though we do have immigration laws, we don’t take them seriously and, no matter what the laws say, it’s as if you’re committing only a mild trespass when you enter unlawfully.”

This must end. Every nation has the right, and often the responsibility, to secure its borders. The United States is no exception.

For that reason, restitution-based legislation would affirm the need to secure the borders while also causing undocumented immigrants to make restitution for illegal entry, falsification of papers and identification, and other crimes. Only after making restitution may they apply for citizenship.

Second, Congress must reject mass deportation proposals, which are inhumane and financially disastrous.

Mass deportation would result in inhumane treatment of many immigrants. It would punish mercilessly some individuals and families whose illegal entry into the United States was done out of fear and desperation.

In fact, many immigrants will embrace the opportunity to make restitution and – if they are allowed – eventually become citizens, pay taxes, and hold their heads high. Restitution-based reform will make those things a possibility, though not a certainty.

Mass deportation would also be a financial disaster. As conservative economists have calculated, previous deportation plans would increase federal spending by approximately $400 billion, reduce the U.S. labor force by more than 6 percent, and shrink the economy by nearly the same percentage. Restitution-based immigration reform would reduce significantly these enormous economic setbacks.

Although American authorities would be within their legal rights to deport Dreamers, they would also be within their legal rights to adjust the application of our laws so that they can show mercy to Dreamers. Our nation has done so many times before in its history and, in doing so, has held together two deeply Christian concepts — justice and mercy.

With such a large majority of the American people wanting to see us solve this on behalf of these young people, what stops us? Fear? Anger? Dirty politics? If we want America to be great, we must also be good, and that means that we consider both justice and mercy and find ways to extend both.

The United States is in many ways a great nation, but we must never forget that our greatness is tied to goodness.