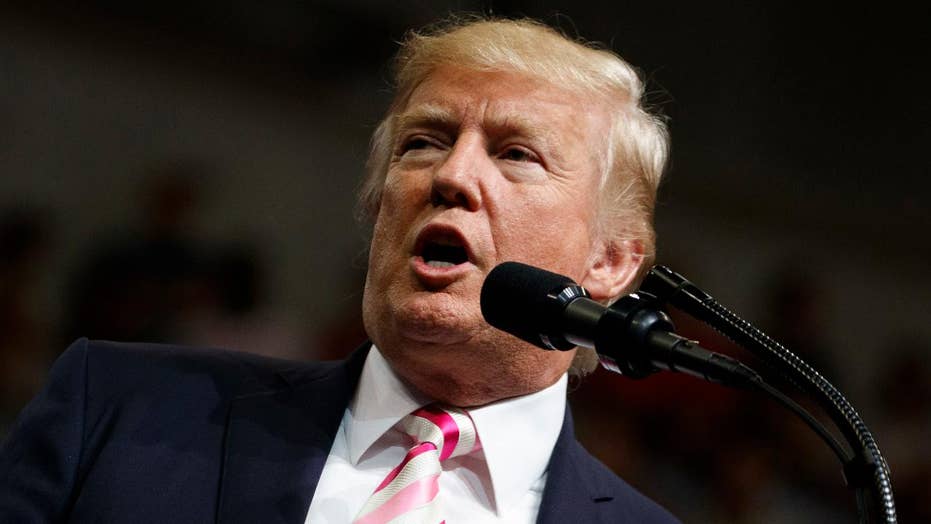 President Trump: No, Russia did not help me

President speaks out about 'Russian hoax' at campaign rally for Sen. Luther Strange

Editor's note: The following column originally appeared in The Hill and in TheHill.com.

“Are there any Russians in the audience? I don’t see too many Russians,” a defiant President Trump recently told an Alabama crowd.

He finds joy, even now, in ridiculing reports of Russian interference in last year’s presidential campaign.

Speaking to his true believers, he reassured them that “Russia did not help me win” and dismissed reports to the contrary as “the Russia hoax — one of the great hoaxes.”

So, in the self-aggrandizing manner of the president, let me ask — Are there any Russians reading this column right now?

And, yes, the Russians planted propaganda on Twitter and Facebook. They also tried to manipulate Google searches to promote stories damaging to Hillary Clinton’s reputation.

That’s the truth. But the president is still telling his core supporters there is no evidence of Russian interference — an assertion he will cling to, short of investigators finding proof of Russians hacking into voting machines or threatening people outside polling stations.

Trump’s denials continue even as House and Senate committees are finding evidence that Russia used social media to distort the American public’s view of Clinton, the Democratic presidential nominee, by demonizing her while lionizing Trump.

Twitter has revealed that it “shut down 201 accounts that were tied to the same Russian operatives who posted thousands of political ads on Facebook” during the race, according to The Washington Post.

The Russians showed special delight in encouraging racial bitterness in the country. They targeted ads at cities rocked by police shootings like Baltimore, Maryland, and Ferguson, Missouri.

“Their goal was to spread dissension, was to split our country apart, and they did a pretty good job,” Sen. Mark Warner, D-Va., the ranking member of the Senate Intelligence Committee, told ABC News last week.

This new information goes beyond earlier reports from the U.S. intelligence agencies that Russia paid people to get on social media and defame Hillary Clinton.

Their goal was to place stories on social media to anger and energize Trump supporters. They wanted to stir the belief among voters that politically correct mainstream news reports were covering up the threat posed to the country by Clinton, blacks, Muslims, immigrants, and gays.

Yes, a foreign power — Russia — warped our citizens’ voting behavior by poisoning our social media. Name a 2016 campaign that used the same playbook?

Despite the president’s efforts to get people to look away from any evidence of Russian interference in the campaign, the public is alert to the smell of corruption.

A CNN poll taken in September asked voters plainly, “How likely do you think it is that Russian-backed content on Facebook or in other social media affected the outcome of the 2016 presidential election?”

And the public has yet to hear from Robert Mueller, the special counsel investigating ties between Trump campaign officials and Russia.

In late July, Mueller’s team tightened its squeeze on former Trump campaign chairman Paul Manafort, reportedly threatening him with an indictment and picking the locks on his home to execute a raid.

The Washington Post reported that Manafort offered “private briefings” on the campaign to a Russian oligarch with close ties to Russian President Vladimir Putin.

Mueller is also showing interest in possible obstruction of justice by the president and key members of Trump’s White House.

He is pushing for notes and e-mails from White House officials involved with the firing of former FBI Director James Comey and former National Security Adviser Michael Flynn.

He also wants records on a Russian lawyer’s meeting with Donald Trump Jr., the president’s son, during the campaign.

It was one year ago this week when the Office of the Director of National Intelligence (DNI) and the Department of Homeland Security issued a rare public statement.

That statement expressed confidence “that the Russian Government directed the recent compromises of emails from U.S. persons and institutions, including from U.S. political organizations…to interfere with the U.S. election process.”

That finding was followed up by a more detailed analysis from the DNI, the FBI, the CIA and the NSA.

“Putin and the Russian Government developed a clear preference for President-elect Trump. We have high confidence in these judgments,” their January 6, 2017 report stated.

Yes, Mr. President: Russia did help you. Mueller doesn’t seem to care if you label his investigation a “hoax.” And he has yet to be intimidated by your press secretary’s continued attacks on Comey.

The walls are closing in with the Mueller investigation.

The looming question is when will Congressional Republicans begin to distance themselves from Trump?

Will they believe the evidence in front of them or the fake news on their Facebook page?