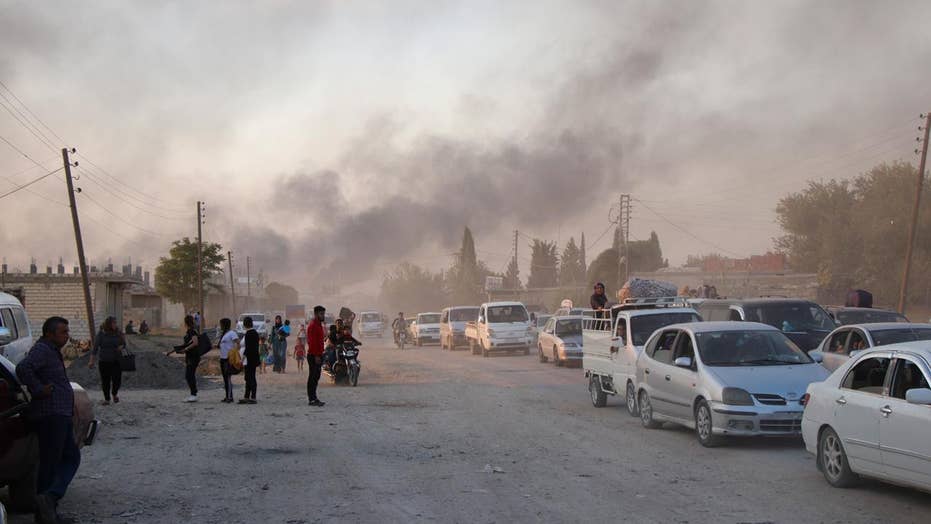 Turkish warplanes and ground troops have invaded northern Syria in an attempt to create a 30-kilometer buffer zone between Syria and the Turkish border. Fox News spoke with Hisham Arafat, a reporter with Kurdistan 24 news, about what is taking place on the ground and how Kurdish forces feel about the United States' withdrawal.

The year was 1972 and Americans wanted out of the Vietnam War; the right because it was not being won and the left because of the increasing body count and lies from generals and politicians about “progress” toward defeating the communists.

The late Al Qaeda leader Usama bin Laden cited that withdrawal as evidence that the U.S. had no stomach for long wars. He believed the U.S. would grow weary from the “War on Terror,” ceding the killing field to the terrorists.

JAMES CARAFANO: IS TRUMP SERIOUS ABOUT SYRIA? HERE'S WHAT YOU MUST ALWAYS REMEMBER

Now comes President Trump with another promise for a unilateral withdrawal of “between 50 and 100 troops,” from Syria. Many critics of the decision believe it is an invitation for Turkish president Recep Tayyip Erdogan to slaughter Kurdish forces, America’s loyal ally in the region in the fight against terrorism. The Kurds have served as a buffer, preventing an attack by Turkey’s powerful military.

Not surprisingly, it didn’t take Turkey long to press its advantage. Reuters reports, “Turkey’s military struck the Syrian-Iraqi border to prevent Kurdish forces using the route to reinforce northeast Syria, as Ankara prepares to launch an offensive there after a surprise U.S. troop pullback.”

Following a backlash, the White House appeared to reverse its Syria decision. An administration official, speaking under the condition of anonymity, said, the U.S. is not removing its forces from Syria in the face of a Turkish incursion. Which decision will ultimately prevail?

But Trump has gone further than announcing a unilateral withdrawal of forces, he has threatened Erdogan that if he attacks the Kurds and mistreats ISIS prisoners and does anything the president considers “inhumane,” “they could suffer the wrath of an extremely decimated economy.”

Erdogan is an Islamist and it appears he’s trying to take Turkey back to the days when it was an Islamic state. Does the president seriously believe Erdogan will bow to threats from one he likely considers an “infidel” leader of the “great Satan,” as another Islamist state, Iran, has called us?

The president says he is merely fulfilling a campaign promise to stop involving America in “endless wars.” It is a noble pursuit, but just as it takes two to tango, it also takes two warring sides to declare a ceasefire, or peace. When only one side abandons the battlefield — and with terrorism the battlefield is everywhere — guess which side wins?

Even some usually supportive Capitol Hill Republicans are critical of the president’s decision because it betrays a lack of policy objectives in the region. No one knows, or can articulate, U.S. foreign policy anywhere. Another example: the administration supports the toppling of the Maduro regime in Venezuela, but it is no closer to achieving that stated goal.

Former United Nations Ambassador Nikki Haley, who was praised by President Trump for her service when she announced her resignation, has joined the growing chorus of people alarmed by the president’s decision. Haley, a potential presidential candidate in the near future, has said that the new U.S. policy toward the Kurds (if one can call it a policy) amounts to “leaving them to die” and is “a mistake.”

Yes, the Middle East is a snake pit and the U.S. has spent a lot of money over many years trying to kill off the “snakes.” But stopping the killing of those who want to kill us almost guarantees they will return to the battle with renewed resolve and new recruits. What will the unilateral withdrawers say then?

Coming home is no guarantee the terrorists won’t come after us here. In fact, Iran has bragged of having their agents inside the U.S., awaiting instructions to inflict more death and destruction.

America’s withdrawal of troops from Vietnam ensured a communist victory, but that war was more about nationalism than communism. This war is different.

When he was president, George W. Bush said we are fighting terrorists over there, so we won’t have to fight them here. Withdrawing troops and risking the destruction of the Kurds is a step too far.