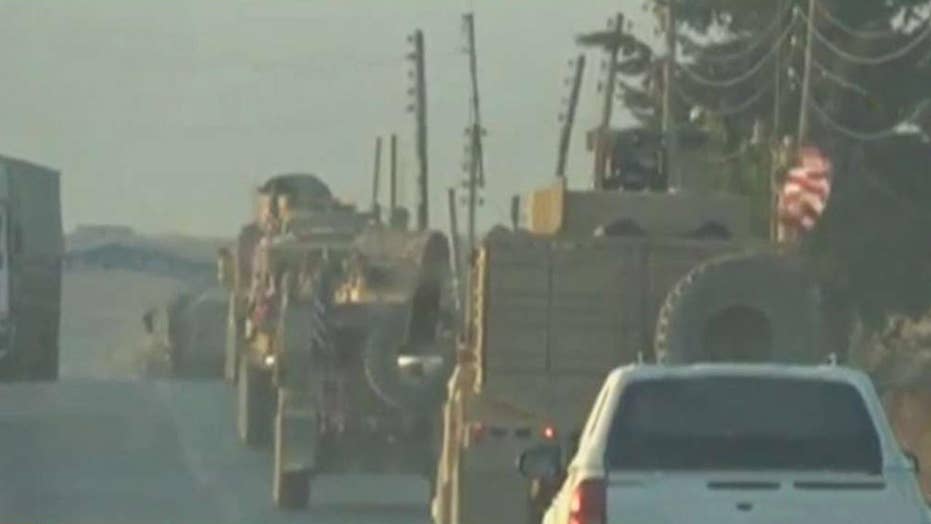 The surprise news by the White House, announced after a phone call with the Turkish president, essentially greenlighted a Turkish invasion of Syria; national security correspondent Jennifer Griffin reports from Washington.

Thousands of Syrian Kurdish fighters gave their lives to help America defeat the Islamic State, but President Trump just decided to abandon the Kurds to their worst enemy, Turkish strongman Recep Tayyip Erdogan. This is good news for the Islamic State, which can mount its comeback more effectively if the Kurds are distracted. It is also good news for the Islamic Republic of Iran, which wants to turn Syria into a base for attacking Israel, something that will now be a lot easier.

Trump’s decision came out of the blue last night, in the form of a brief announcement from the office of the White House press secretary. Top national security officials had been working for months on an agreement with Turkey to prevent it from attacking the Kurds. That agreement appears to be dead.

The White House said Trump’s decision came after a phone call with Erdogan earlier on Sunday. This is actually the second time Trump has attempted a sudden reversal of his Syria policy after a phone call with Erdogan. Last December, the president said he was going to pull all U.S. troops out of Syria — they numbered about 2,000 at the time — and let Turkish forces deal with any remaining problems caused by the Islamic State.

That December reversal led Secretary of Defense James Mattis to resign in protest. Meanwhile, 42 Senate Republicans voted with 26 Democrats to condemn any “precipitous withdrawal” prior to the “enduring defeat” of ISIS. Slowly and quietly, Trump started to back away from his decision, although he never said he had changed his mind.

One reason that so many conservatives united against Trump’s decision is they understood that Erdogan is an adversary of the United States, even though Turkey remains part of NATO. Under previous leaders, Turkey had been a real ally. But Erdogan is an Islamist who has a long record of protecting extremists and terrorists, including members of Hamas directly responsible for murdering Israelis. Not surprisingly, the Turkish president is also a vicious anti-Semite who blames Jewish conspiracies for the economic chaos his own policies have created.

Influential figures close to Erdogan also partnered with Iran to evade U.S. sanctions, helping the Islamic Republic to tap $20 billion of frozen income — the full details emerged in the federal trial of a Turkish banker in 2017.

With regard to Syria in particular, Erdogan has a long record of sending money and weapons to extremist rebels, including those tied to Al Qaeda. Turkish intelligence even helped deliver the goods across the border. Just last month, the Treasury Department imposed sanctions on several Turkey-based financiers and currency exchanges for supporting the Islamic State.

Even so, yesterday’s announcement from the White House said, “Turkey will now be responsible for all ISIS fighters in the area captured over the past two years.” In other words, Trump is putting an arsonist in charge of putting out the fire.

Conservatives who opposed Trump’s planned withdrawal last December also understood that the president was dead wrong when he claimed that ISIS had been defeated. It was true that the U.S.-led coalition had put an end to the Islamic State’s ability to govern the territory it called the "caliphate." However, it was clear that ISIS was already shifting to an insurgency based on guerrilla warfare. That insurgency has gotten progressively stronger over the past 10 months, yet Trump refuses to acknowledge the difference between dismantling the caliphate and defeating ISIS. Yesterday, he justified his latest reversal on Syria by insisting, “We quickly defeated 100 percent of the ISIS caliphate.”

Some high-profile Trump supporters are already speaking out against the president’s decision. Former U.S. Ambassador to the United Nations Nikki Haley tweeted, “The Kurds were instrumental in our successful fight against ISIS in Syria. Leaving them to die is a big mistake.”

Sen. Lindsey Graham, R-S.C., told Fox News that Trump was making exactly the same mistake that Obama made in Iraq, which led to the rise of ISIS. “This is a big win for Iran and Assad,” Graham added, "a big win for ISIS."

Trump is clearly sensitive to the suggestion he is betraying the Kurds. Within hours of Haley and Graham’s comments, Trump pledged that if Turkey did anything “off limits” in Syria, he would “destroy and obliterate” its economy. Trump’s threat is not entirely credible, however, since he was not willing to sanction Turkey when it directly defied a U.S. warning not to purchase advanced air defense weapons from Russia. Nor has Trump fined the Turkish bank that helped Iran evade U.S. sanctions, despite the conviction of the bank’s general manager.

If Trump were serious about preventing Turkey from slaughtering the Syrian Kurds, he would have supported the State Department’s efforts to negotiate a border security agreement, rather than giving Erdogan a green light to invade. But mistakes like this are to be expected when the president makes impulsive decisions rather than thinking things through with the help of his top advisers. As Fox News reported this morning, Trump’s decision completely blindsided the Department of Defense.

The only good news when it comes to Syria is that the president still has time to reverse his decision. While U.S. troops appear to have already left certain observation posts near the Syrian border with Turkey, they can return. Secretary of State Mike Pompeo should quickly tell the Turkish leader that his invitation to the White House in November will be canceled if Turkey launches an attack on the Kurds.

Trump says he wants to put an end to America’s endless wars, an idea that is popular on both sides of the aisle. What the president does not seem to understand is that we have avoided an endless war in Syria by finding allies — including Arabs and Christians, as well as Kurds — who did the hardest and bloodiest fighting. By supporting our partners with air power, intelligence, and a small contingent of troops, the U.S. military has been achieving a key victory at a very low cost in American dollars and American lives. A wiser president would take credit for this achievement instead of undermining it.