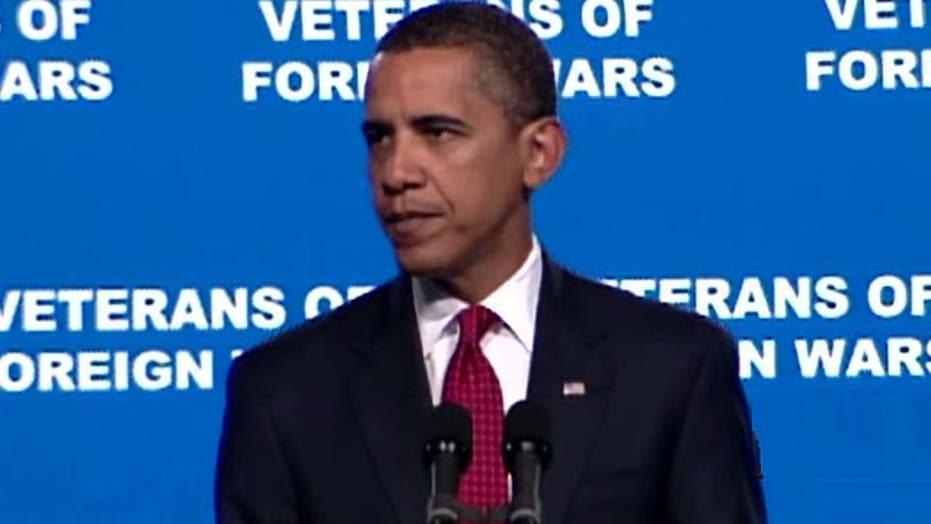 Has Obama been 'all talk' about fixing VA issues?

Should president be more involved?

Today President Obama is a controversial figure, but let me offer my prediction about the judgment of history. I think he’ll be remembered as the most consequential American president since George Washington.

Washington was the “indispensable man” because he returned to civilian life when he might have crowned himself king. For his part, Obama will be remembered as the person who assumed king-like powers as president.

In my book, "The Once and Future King: The Rise of Crown Government in America," I describe what has happened as a return to crown government, the kind of government Britain had under George III.

The difference is that British kings didn’t have to stand for election. But then an election gives American presidents a political legitimacy British kings never had.

George Mason foresaw this in the 1787 Convention that gave us our Constitution. The American president would be an “elective monarch,” he said, and added that that would be worse than the real thing.

The long arc of American constitutional government has bent from the monarchical principle of the colonial period to the separation of powers, and now back again to crown government and rule by a single person. While this didn’t start with Obama, he’s taken it to an entirely new level.

He makes and unmakes laws without the consent of Congress; he spends trillions of government dollars; and the greatest of decisions, whether to commit his country to war or lay down our arms, is made by him alone. His ability to reward friends and punish enemies exceeds anything seen in the past. He is rex quondam, rex futurus – the once and future king.

The doctrine of separation of powers was supposed to prevent that. It didn’t. Instead, it has served to immunize the president from accountability. If it was meant to rein in a president, it’s like a boomerang that has bent back and struck the person who launched it.

We’re seeing evidence of the transformation of American politics in recent campaign spending decisions. Large Democratic donors have been ignoring appeals to spend their money on November’s congressional candidates and putting their money into Hillary Clinton’s 2016 presidential campaign instead. And that’s just what we’d expect, if the president holds all the cards.

Who cares which party controls the Senate, if all the action is at the other end of Pennsylvania Avenue? If Democrats complain about underfunded Senate campaigns, then they have only themselves to blame for the rise of presidential government. When Bill Clinton issued executive orders, Democratic adviser Paul Begala gushed, “Stroke of the pen … Law of the land. Kind of cool.”

All this should be alarming to Americans. Nothing is more central to the Founders’ Constitution than the idea that the centralization of political power in a single person is a threat to liberty. If you’re skeptical, take a look at the failed presidential regimes, where presidents become presidents-for-life, or where an Argentinian spouse succeeds a term-limited spouse in office. Of course, America was and is strongly democratic, but one might feel more confident that the future will resemble the past if the media showed much more interest in the alarming rise of presidential power. As for the millennials, one has the uncomfortable feeling that, so long as he gave Sandra Fluke free birth control pills, they’d vote for President Putin.

What about Obama’s foreign policy, some might object. “You say he’s too strong, but conservatives also say he’s too weak when it comes to the military. You can’t have it both ways!” I’d be inclined to agree, except I think his foreign policy displays strength, not weakness.

Do you remember when liberals used to say, “Sometimes it takes more strength to walk away from a fight”? And that’s where we are, when a president goes out of his way to antagonize traditional allies, shows “flexibility” to military rivals and reduces the size of his country’s military. That takes leadership, and the kind of daring one would expect from a president who promised to transform America.

When they look at Obama’s foreign policy, some conservatives hint darkly of a deep-rooted antipathy to America by someone they never quite accepted as a fellow countryman.

I don’t buy it. Instead, I see a logical desire to shift spending from defense to social welfare, just what one would expect from a progressive politician.

As a first step to a major reduction in military spending, he’s started with a foreign policy that abjures military force. After all, what’s the point of carrying the biggest gun in town if everyone knows you won’t use it?