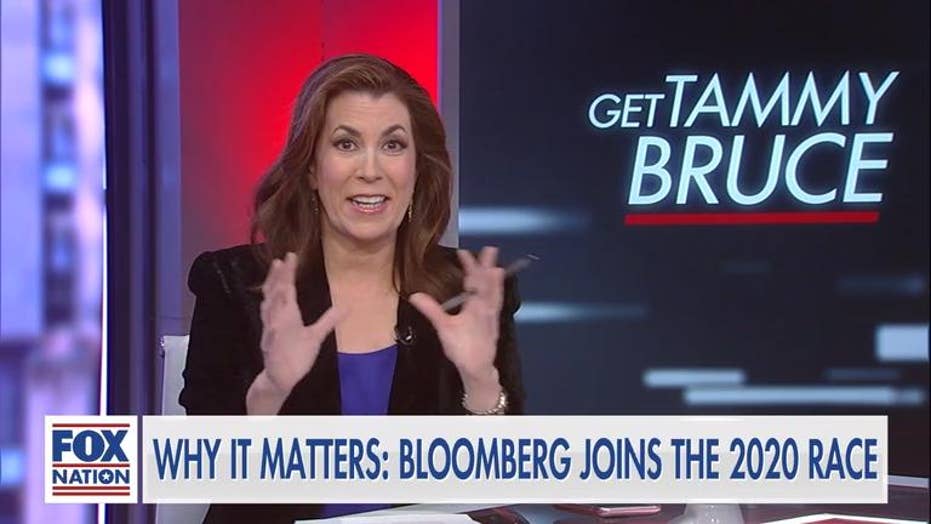 "No one is out there thinking 'Oh please let it be Mike Bloomberg,'" said Bruce, describing the reaction of the average Democratic primary voter to the former New York City mayor's entry into the 2020 presidential race.

"Especially with the rhetoric that the Democratic base has been listening to regarding the 'evil' billionaires," Bruce continued in a new episode of Fox Nation's "Get Tammy Bruce." "This is their example of the establishment trying to save themselves --  and it is going to guarantee the re-election of President Trump.'

Bruce's remarks come days after Bloomberg formally declared his candidacy with a one-minute ad, which was posted on social media. Along with the video, Bloomberg posted a written statement on his campaign website in which he laid out why he was the best candidate to defeat President Trump next November.

Bruce called Bloomberg's digs at President Trump a "remarkable approach" and offered praise for the president and his administration.

"America's a big dumpster fire under Donald Trump...said no one ever," Bruce contended. "It's a remarkable approach. And he's positioning himself, as almost in an alternate reality, an alternate universe where America's got to be saved from the 'menace.'"

"This is their example of the establishment trying to save themselves --  and it is going to guarantee the re-election of President Trump."

"Maybe they do try to gaslight you about what the reality of your life is," Bruce continued. "But I don't think that historically low unemployment rates for every sector of society is a problem or some disaster for America. Rising wages, not a disaster for America. I mean...there's been terrific leadership from President Trump. Whether you voted for him or not...the fact of the matter is, he's been successful."

The former mayor's entrance comes just 10 weeks before primary voting begins, an unorthodox move that arguably reflects anxiety within the Democratic Party about the strength of its current candidates. As a self-proclaimed centrist with deep ties to Wall Street, Bloomberg is expected to struggle among the party’s energized progressive base.

"We'll see if, in fact, Mr. Bloomberg believes that his money will make up the difference... but we haven't really seen him in the heat of the arena," Bruce said.

"I mean, he comes out being pretty much untouched because there have been no debates, no direct confrontation...he hasn't had to really speak up. And so when somebody gets into the arena, maybe that could change a little bit... Everybody else is beaten up a little bit because of the debates and all...Mike Bloomberg just waltzes in."

Later in the segment, Bruce discussed a "staggering memo" from Bloomberg News that was released earlier this week, informing the public that they do not intend to investigate Bloomberg or his Democratic opponents during the 2020 election season -- but that they will continue to report on President Trump. The memo came after Bloomberg announced that he would be stepping away from the news organization during his presidential bid. 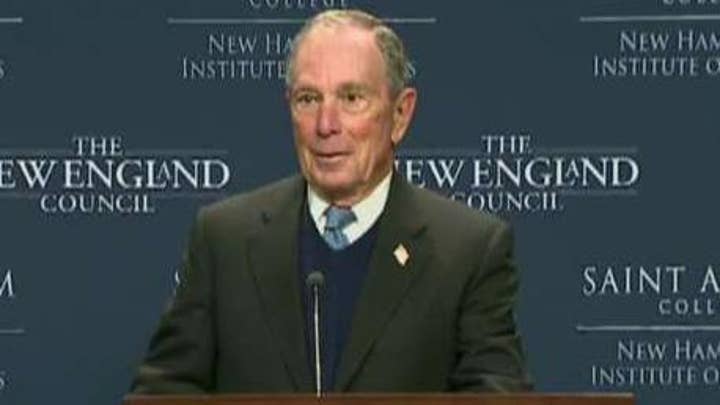 "We will continue our tradition of not investigating Mike (and his family and foundation), and we will extend this same policy to his rivals in the Democratic primaries. We cannot treat Mike's Democratic competitors differently from him. If other credible journalistic institutions publish investigative work on Mike or the other Democratic candidates, we will either publish those articles in full or summarize them for our readers - we will not hide them.  For the moment, our P&I team will continue to investigate the Trump administration as the government of the day," the memo read.

"Staggering. And yet they felt comfortable...this is the order to their reporters that they are not going to investigate Bloomberg," Bruce responded.

BLOOMBERG'S CAMPAIGN MANAGER SAYS 'THE GENERAL ELECTION IS IN SIX STATES, THAT'S IT'

"It brings up this entire issue we have with legacy media," Bruce continued. "The fact that we can't trust it, that this is their go-to reaction when their founder is running for president."

Calling out the outlet for one-sided reporting, Bruce questioned whether the "unfairness" was a reflection on Bloomberg himself.

"It's so blatant that it's embarrassing... either you don't investigate anybody, you stop covering politics, or you cover politics entirely. You do all one way or all the other," she said.

"Is this then the nature of what Michael Bloomberg engenders in a news organization, this kind of unfairness? Is this what he stands for," she asked.

"But...we won't know if you rely on Bloomberg News for that."

For Bruce's full remarks and for more on the issues of the day, join Fox Nation and watch "Get Tammy Bruce" today.