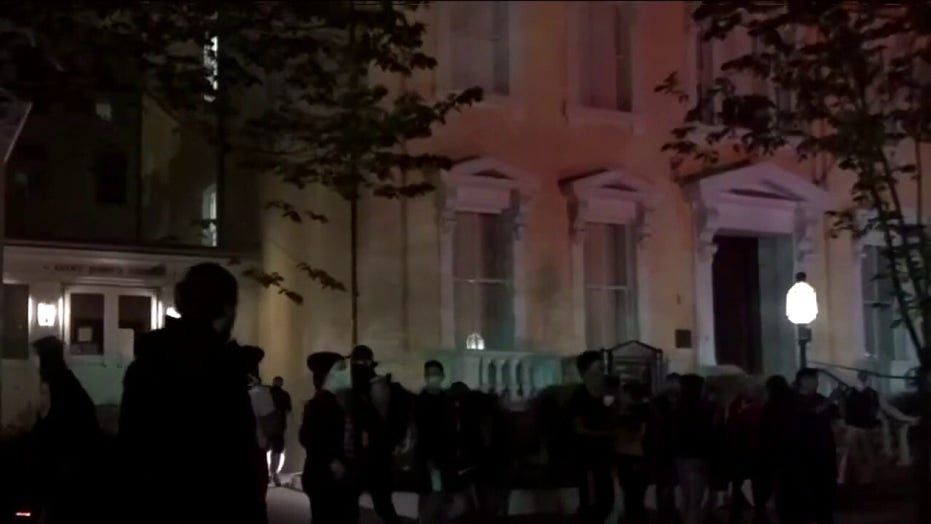 CNN’s media pundit Brian Stelter apologized on Sunday after he was mocked for falsely claiming the historic St. John’s Church showed “no sign of smoke or fire” as it was shown ablaze live on television.

As authorities clashed with demonstrators in Washington, D.C. for the third straight night, the parish house connected to the historic St. John’s Episcopal Church across the street from the White House was set on fire late Sunday — and the chaos was aired live on Fox News.

A reporter tweeted that the landmark was on fire and CNN’s Stelter – who has become known in recent years as the media's "hall monitor" – quickly responded, “What’s your source? Live video of St. John’s does not show obvious fire.”

CNN’s Brian Stelter deleted a tweet and apologized after he was mocked for falsely claiming the historic St. John’s Church didn’t appear to be on fire. (Photo by Kevin Mazur/Getty Images for CNN)

The reporter, Daily Caller’s Katrina B. Haydon, responded that she was watching it live on Fox News — but Stelter didn’t take her word for it.

“You can see the church on your TV, right? No sign of smoke or fire at the church. Small fires across the street. Your tweet is going viral, and it’s not accurate,” Stelter responded.

While the "Reliable Sources" host attempted to scold a fellow journalist over her sourcing, it turned out Stelter was the one who was "not accurate." The parish house connected to the St. John’s Church, which contains offices and parlors for gatherings, was indeed on fire.

The basement, which was torched, is used for childcare during church services, and had recently undergone renovations. Fox News aired footage of the fire well before Stelter questioned the accuracy and was relentlessly mocked on social media as a result.

Stelter eventually deleted the tweet and apologized, but many continued to condemn CNN’s media critic.

“I deleted my tweets because I fell victim to the worst foolish impulses of this website. I'm sorry for criticizing your tweets. I'm also sorry if anyone uses this brief exchange to distract from what really matters — the protesters, the police, the church,” Stelter wrote.

“Stelter took the coward’s way out and reminded us that he’s a pathetic excuse for a journalist,” NewsBusters managing editor Curtis Houck wrote.

Meanwhile, the church said every president beginning with James Madison, “until the present,” has attended a service at the church, giving it the nickname, “the church of presidents.”

Just last week, Stelter was also lampooned when he shared a Washington Post column attempting to compare the arrest of a CNN crew while covering the Minneapolis riots to the tragic death of George Floyd.

Fox News’ Gregg Re and Alex Pappas contributed to this report.