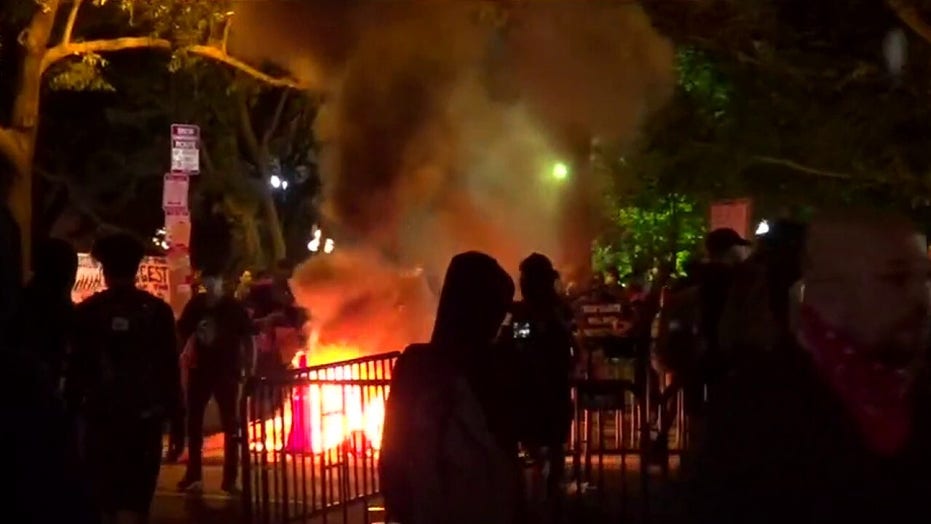 Protesters gather near the White House as night falls, Kevin Corke is on scene.

Chaos broke out in several major U.S. cities on Sunday night as rioters hijacked what had been peaceful protests over the death of George Floyd in Minneapolis police custody.

Among the turmoil: Fires lit near the White House, including at St. John's Church just a short walk away; rioters clashing with police in New York City; and the Los Angeles County sheriff saying people still out on the streets were "acting like terrorists."

The National Guard’s top general on Sunday said Guard units in nearly half of U.S. states have been mobilized to help major cities deal with the riots. Gen. Joseph Lengyel said some 16,000 additional Guard troops have been deployed to 24 states and the District of Columbia in response to civil disturbances.

Floyd died Monday after a Derek Chauvin, a white Minneapolis police officer, pressed his knee on Floyd’s neck. The officer has been charged with third-degree murder and second-degree manslaughter; he and three other officers were fired from the force after video of Floyd’s death emerged.

The latest deployment brought the total number of deployed National Guard members to about 62,000 across the country. Other Guard members already had been deployed to assist with their governments’ COVID-19 relief efforts.

The riots erupted from demonstrations in cities from San Francisco to Boston protesting the death of Floyd. 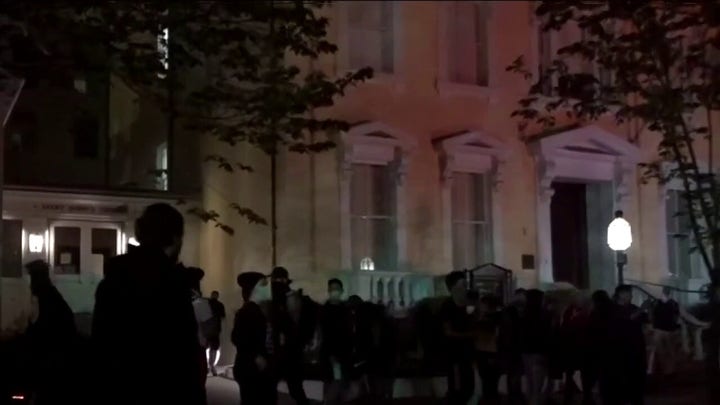 In Washington, Fox News cameras were rolling as flames erupted in the newly renovated basement of the St. John's Church parish house; it was unclear exactly how it started. A senior official said more than 50 Secret Service officers have been injured so far Sunday night, with the numbers expected to worsen, as rioters hurled bottles and Molotov cocktails.

In California, Los Angeles County Sheriff Alex Villanueva told local media, "The peaceful [protesters]... tend to remain peaceful but what's embedded within them are people that are right now, they're just acting like terrorists, trying to instill fear, damage property and loot." 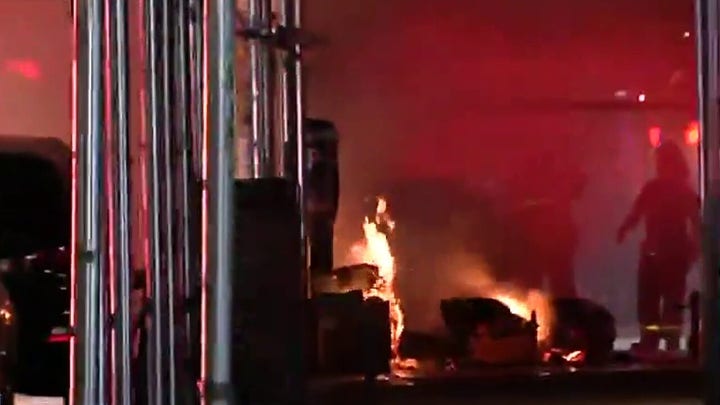 He continued, "There's no lawful protesters left anymore. Everybody who's here is just trying to do damage."

Earlier Sunday, people robbed stores in broad daylight in Philadelphia and Santa Monica, California, and a driver sped a semitrailer toward a massive crowd of people assembled on a highway in Minneapolis -- but remarkably, there were no initial reports of anyone hurt aside from that driver.

In neighboring St. Paul, thousands gathered peacefully in front of the state Capitol, pledging to keep up the protests. 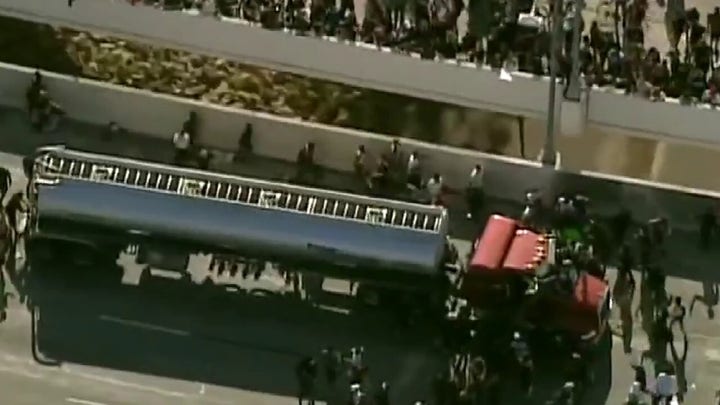 BUILDINGS AROUND WHITE HOUSE BOARD UP, PROTECT VALUABLES AMID POSSIBILITY OF MORE PROTEST VANDALISM

The scale of the protests, spanning from San Francisco to Boston and unfolding on a single night, rivaled the historic demonstrations of the civil rights and Vietnam War eras.

More than two dozen mayors and governors have imposed curfews, a level not seen the unrest following the 1968 assassination of the Rev. Dr. Martin Luther King Jr., The New York Times reported.

In Indianapolis, two people were reported dead in bursts of downtown violence, adding to deaths reported in Detroit and Minneapolis in recent days.

Protestors coming off the Brooklyn Bridge from Manhattan.  (Fox News)

Vandals defaced buildings in cities across the U.S., from the facade of St. Patrick's Cathedral in New York to the historic Hay-Adams hotel near the White House. Some of Floyd's gasped last words — "I can't breathe" — were repeated, alongside anti-police messages.

In Boston, protesters chased out a Boston police cruiser while throwing objects at the vehicle and shouting, "No Justice, No Peace."

In New York City, police reportedly clashed with protesters outside a bookstore near Union Square, prompting a perpetrator to allegedly set fire to a police car.

Meanwhile, crews near the White House worked to replace windows that had been shattered with large pieces of wood. Buildings for blocks were marked with graffiti, including curses about Trump. Shattered glass still covered the sidewalks. The damaged buildings included the Department of Veterans Affairs, directly across the street from the White House.

The Secret Service has advised the public to avoid streets and parks near the White House complex.

Chauvin, 44, is custody on a $500,000 bail. He is facing charges of third-degree murder and second-degree manslaughter. He is scheduled to make his first court appearance Monday afternoon.

The Guard announced in a news release that it expected the civil unrest response mission to grow as governors assess each situation in their states.