In an interview on "Fox & Friends" with hosts Steve Doocy and Brian Kilmeade, Sanders said that anybody who has been paying attention to his campaign and performances on the debate stage "knows he has been a terrible candidate."

"Anybody who has been listening to his policy positions knows he is extremely liberal and would make an even more dangerous and terrible president," she continued. "Let's not forget that he has moved so far to the left; Joe Biden is no moderate."

On what was dubbed "Super Tuesday II", further cementing his status as front-runner, Biden increased his lead over Vermont Sen. Bernie Sanders in the race for delegates, with 823 delegates to Sanders' 663.

Sanders now faces daunting delegate math that leaves him slipping swiftly out of reach of the Democratic presidential nomination.

In a remarkable and uncharacteristic move, Sanders opted not to deliver a primary night address, passing on the opportunity to speak to a national audience.

“I want to thank Bernie Sanders and his supporters for their tireless energy and their passion. We share a common goal and together we’ll defeat Donald Trump. We’ll defeat him together,” Biden said speaking near his national campaign headquarters in Philadelphia on Tuesday night. 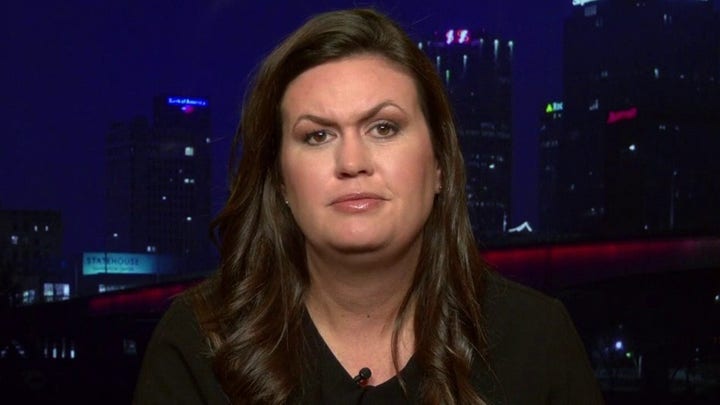 But Sanders told the "Friends" hosts the Democratic Party has settled for Joe Biden and that he doesn't have the temperament or positions the country wants a president to have.

"Donald Trump has had constant levels of enthusiasm and last night, while Joe Biden was still fighting it out with Bernie Sanders, Donald Trump was putting up historic wins for an incumbent in Michigan, in Missouri, in Mississippi, and that was before all of the votes even came in," she remarked.

She said a clear choice has been presented to the American electorate.

"We can either continue down the path of prosperity and security under this president, or we can go backwards and we can go back to the ideas of the past, of Joe Biden and the Democrat Party that moved so far to the left that they do not identify and line up with most of America," she stated. "And I think we saw that play out in real-time when he yelled at that guy in a hard hat yesterday."