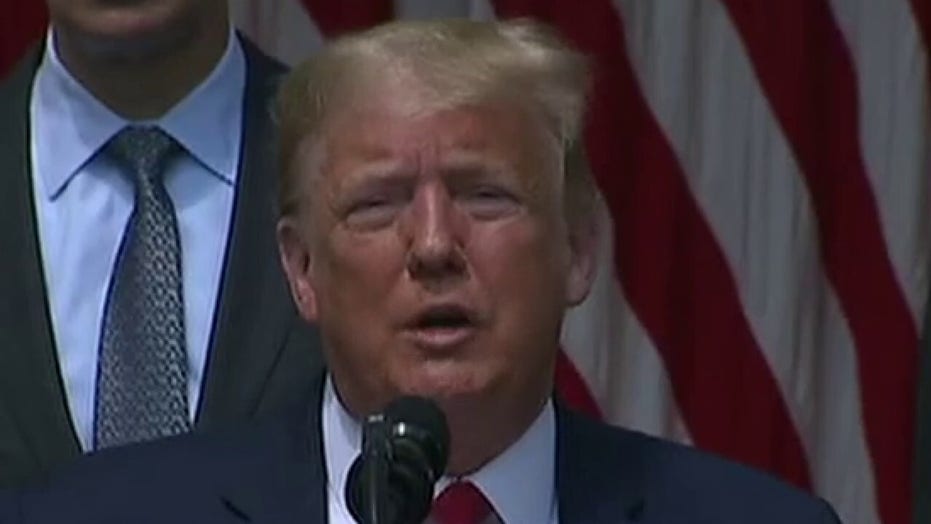 The latest U.S. job numbers, revealed Friday, are a "boon" for President Trump and represent "vindication" for those who opposed coronavirus lockdowns, Martha MacCallum said.

The host of Fox News' "The Story" shared her views while co-hosting "The Five."

"I think it's an interesting assessment on the lockdown rebellion. A lot of people fought back. They wanted to get back to work. They wanted things to reopen," MacCallum said. "We've seen in cases all across the country that where that happened and those governors were vilified for the most part.

"The cases seem to be under control in those areas," she continued, "Even the Ozarks, where the you know, all those kids were partying and everybody was obviously concerned about the proximity that they were in, at least at this point, does not appear to have registered an increase in cases in that area.

CONGRESS HAS FUNNELED TRILLIONS TO CORONAVIRUS RELIEF. WHERE IS THAT MONEY GOING?

"It is, I think, of vindication of that movement, loosely held movement, across the country," MacCallum said. "And I do think that it's obviously a boon for President Trump, who seems to be in a much better mood than he was earlier this week, which was a very tough week for him on a number of fronts."

The Labor Department's May jobs report revealed that employers added a stunning 2.5 million jobs last month -- the biggest increase on record. The nation's unemployment rate dropped to 13.3 percent from 14.7 percent.

Trump on Friday promised a "rocketship" rebound from the coronavirus pandemic, suggesting 2021 could be one of the "best years" for the U.S. economy after the better-than-expected May jobs report.

A U.S. economic rebound could be a big problem for presumptive Democratic presidential nominee Joe Biden in November, MacCallum said.

"I think that, you know, the energy that he lacks when he talks about the economy in the future is a problem for him," she said. "So I think things are going to intensify. And I think that the economy, if there's all, you know, all indications in terms of what we're seeing, indicate that that is going to continue to go up.

"There's going to be some jobs that don't ever come back. So there are more layers to this story that I think are going to play out that are going to be tough for the economy and certain sectors," MacCallum added. "But, you know, overall, this is obviously really good news, very surprising news today."