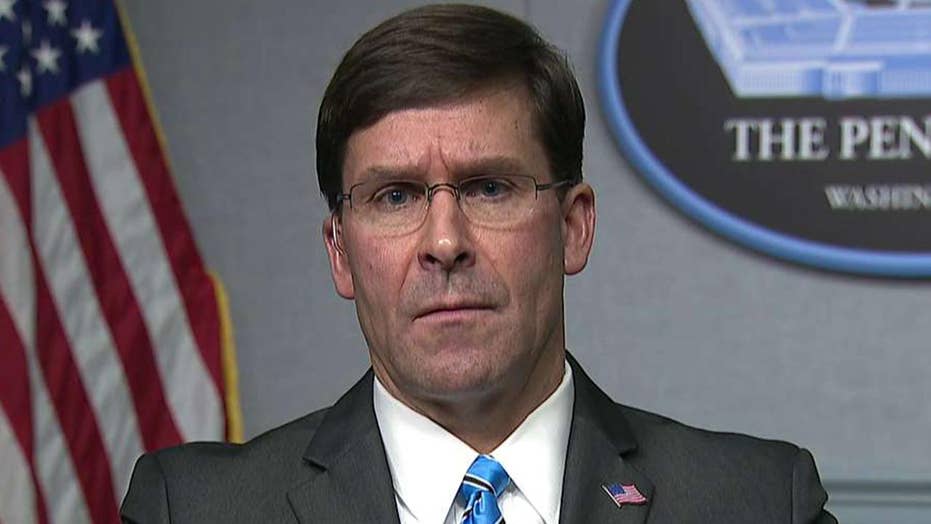 Defense Secretary Esper: We are going to defend ourselves and our interests in Baghdad

After the U.S. Embassy attack in Iraq, Defense Secretary Mark Esper tells 'America's Newsroom' that actions by Iran or its proxies will be met with a severe and strong response by U.S. forces.

Secretary of Defense Mark Esper reacted on Thursday to the U.S. Embassy attack in Iraq earlier this week, saying that it's time for Iran to start "acting like a normal country.”

“We are there in Iraq working with our Iraqi partners to ensure the enduring defeat of ISIS,” Esper said on “America’s Newsroom” on Thursday.

“Through the president's direction, we were able to physically defeat the caliphate that remains physically defeated, if you will," he added. "And now our aim is to deter further Iranian bad behavior that has been going on now for over 40 years. It's time that Iran started acting like a normal country.”

A two-day siege outside of the U.S. Embassy in Baghdad came to an end Wednesday afternoon after dozens of pro-Iran militiamen and their supporters withdrew from the compound.

The crisis started early Tuesday, when, in an orchestrated assault, hundreds of protesters stormed the embassy compound, one of the most heavily fortified U.S. diplomatic missions in the world.

POMPEO: US WILL HOLD IRAN 'ACCOUNTABLE' FOR ANY 'MALIGN ACTIVITY' AFTER BAGHDAD EMBASSY ATTACK

The violent protests, which resulted in smashed windows and sprayed graffiti on the embassy's walls, were said to be in protest of the deadly U.S. airstrikes that targeted an Iran-backed militia over the weekend, killing 25 fighters. In turn, those strikes had been in response to a rocket attack on an Iraqi Army base that killed a U.S. contractor and injured several American troops.

“We’ve had Iran-sponsored militia groups attacking U.S. forces now for several months. It culminated in the death of [an] American last week and the wounding of several soldiers,” Esper said. “This obviously crossed a line for us, and we responded with attacks, strikes on multiple sites of Kata'ib Hezbollah, which is an Iran-sponsored terrorist group.”

“I think we responded, at the direction of the president, quite forcefully and it was a very bold and decisive move and asserted our right of self-defense and the fact that we will act in order to defend our personnel and our interests in the region,” he continued.

“[The] priority for us is always the safety and security of our people, whether it's our diplomats, American citizens, or our forces in the region,” Esper said, explaining why it was necessary to deploy about 750 troops to the area.

“As we’ve seen in the events in the past couple of days, we feel very sure that our embassy is well-secured, and it has sufficient capability there to deter anything that happens. But just the same, it’s prudent based on lessons learned over the past that we deploy additional forces to either reinforce that site or other sites in Iraq, or frankly any other location in the Middle East, as this thing escalates, if it does indeed escalate.”

US EMBASSY COMPOUND IN BAGHDAD TARGETED BY MOB PROTESTING AIRSTRIKES

On Tuesday, President Trump tweeted, “Iran will be held fully responsible for lives lost, or damage incurred, at any of our facilities. They will pay a very BIG PRICE! This is not a Warning, it is a Threat.”

“The president has been very engaged,” Esper said on Thursday. “The national security team has been on the phone with him or has met with him daily, if not every few hours.”

“He wants to make sure that our forces are well taken care of, that we’re capable of accomplishing our mission on the ground, and he’s absolutely correct that if anybody challenges us, they will be met with a severe response, a strong response by U.S. forces,” he continued.

When asked what the “severe, strong” response would look like, Esper responded, “I'm not going to telegraph we are going to do.”