Former Democratic presidential candidate Lincoln Chafee says he is running for the White House as a Libertarian because he believes "2020 is going to be the year where people look beyond the major parties."

Chafee told Fox News' Dave Anthony on Wednesday's "Fox News Rundown" podcast that "both parties" are responsible for the "$22 trillion deficit ... these endless wars and ... the compromising of our personal liberties, tapping of phones."

Unlike the Republican and Democratic parties, Chafee said libertarians are "good at keeping us out of these foreign entanglements."

"They're good on balanced budgets," he added. They're good on letting people live their lives as they see fit ... It's a good party. They're open-minded. They don't believe that the government should be telling us what drugs we can take and can't take. So I'm proud to be a libertarian and bringing these issues to the American people."

A native of Rhode Island, Chafee moved to Wyoming last year and joined the Libertarian Party. As a Republican, he was appointed to the U.S. Senate in November of 1999 to serve out the term of his late father, former Rhode Island Gov. and Navy Secretary John Chafee, and won a full term in his own right the following year.

After losing his seat to Democrat Sheldon Whitehouse in 2006, Lincoln Chafee became an independent the following year. He was elected governor of Rhode Island in 2010 and officially joined the Democratic Party in May 2013. Three months later, he announced that he would not run for a second term as governor. In June 2015, Chafee announced that he would seek the Democratic nomination for president, but dropped out fewer than five months later.

Asked to address his position concerning gun control, Chafee said he's recently changed his views on the issue and that he supports the Second Amendment now more than ever.

"The government has become more and more untrustworthy based on the lies associated with getting us into Iraq," he said. "The Second Amendment was written by the framers of the Constitution [for] when you lose trust in government." 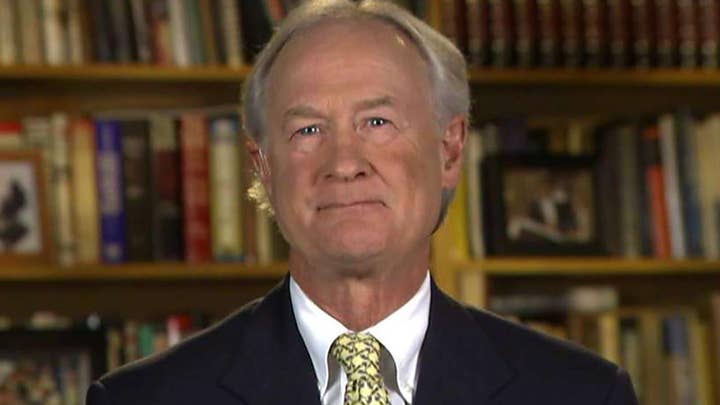 Chafee also cited the National Security Agency's data collection program, exposed by Edward Snowden in 2013, and what he called "the lies associated with [the war in] Afghanistan" as examples of the government becoming more untrustworthy.

Host Dave Anthony asked Chafee to address those in his former party who are working to "get guns off the street."

"Americans love their guns," Chafee responded, "and as you travel around the country, even in Rhode Island, ... [the] Second Amendment is a big issue, and I believe a lot of it is associated with distrust in government."

To hear the full interview, including Chafee's call for the legalization of marijuana and more, subscribe and download The FOX News Rundown on your favorite podcast player and subscribe.

The FOX NEWS RUNDOWN is a news-based daily morning podcast delivering a deep dive into the major and controversial stories of the day."