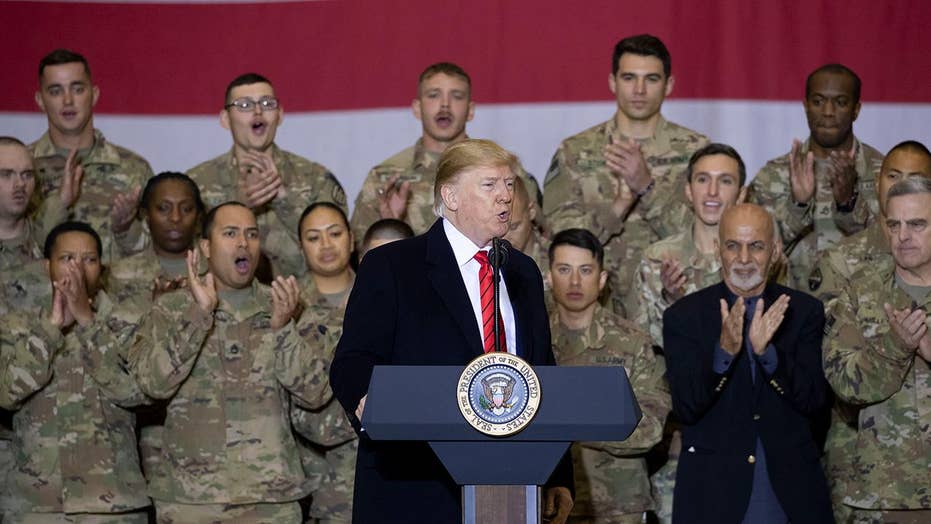 Trump pays surprise Thanksgiving visit to troops in Afghanistan, announces peace talks with the Taliban are back on; reaction and analysis on 'The Five.'

The U.S. government’s claims of progress in the war in Afghanistan over the last 18 years came as top officials in private were venting that it was a costly waste of time, according to a report published Monday.

The Washington Post obtained and published a massive trove of confidential government documents which it says were part of a federal project aimed at figuring out what had gone wrong in the lengthy conflict. U.S. generals, diplomats, Afghan officials and hundreds of others directly involved in the war were interviewed, and more than 2,000 pages of notes taken on their conversations, paint a harsher picture than the rosy one the U.S. government has been selling to the American public, the Post reported.

“Every data point was altered to present the best picture possible,” Bob Crowley, an Army colonel, told government interviewers, according to the Post. “Surveys, for instance, were totally unreliable but reinforced that everything we were doing was right and we became a self-licking ice cream cone.”

The notes on the interviews, which began in 2014, were obtained under the Freedom of Information Act following a 3-year legal battle, the Post said.

“With most speaking on the assumption that their remarks would not become public, U.S. officials acknowledged that their warfighting strategies were fatally flawed and that Washington wasted enormous sums of money trying to remake Afghanistan into a modern nation,” the newspaper wrote.

President Barack Obama addresses US troops during a surprise visit to Bagram Air Field, north of Kabul, in Afghanistan, May 25, 2014, prior to the Memorial Day holiday. (AFP via Getty)

Douglas Lute, a three-star Army general who acted as an Afghan war czar in the Bush and Obama administrations, reportedly told interviewers in 2015 that those in charge “were devoid of a fundamental understanding of Afghanistan — we didn’t know what we were doing.”

“What are we trying to do here? We didn’t have the foggiest notion of what we were undertaking,” he added.

The newspaper also wrote that “several of those interviewed described explicit and sustained efforts by the U.S. government to deliberately mislead the public.”

“They said it was common at military headquarters in Kabul — and at the White House — to distort statistics to make it appear the United States was winning the war when that was not the case."

Other gripes from the interviews reportedly were aimed at the U.S.’s failed attempts to root out corruption in Afghanistan and build up a stable national army and police force.

“What did we get for this $1 trillion effort? Was it worth $1 trillion?” Jeffrey Eggers, a retired Navy SEAL and White House staff member for Presidents Bush and Obama, told interviewers.

“After the killing of Osama bin Laden, I said that Osama was probably laughing in his watery grave considering how much we have spent on Afghanistan,” he reportedly added.

The Washington Post reported that in conclusion, the documents “contradict a long chorus of public statements from U.S. presidents, military commanders and diplomats who assured Americans year after year that they were making progress in Afghanistan and the war was worth fighting.”