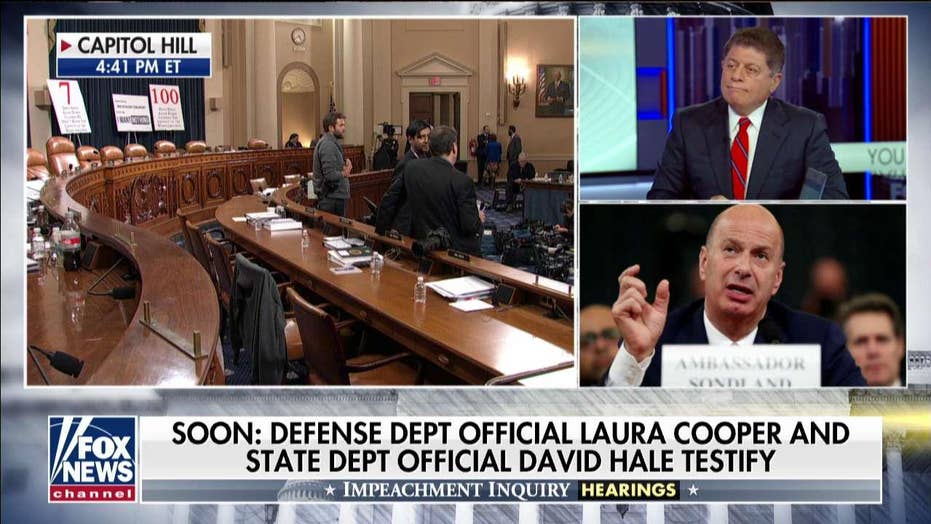 Judge Andrew Napolitano claimed Wednesday that U.S. Ambassador to the European Union Gordon Sondland was the most compelling witness of the Trump impeachment inquiry hearings to date.

Napolitano told Neil Cavuto on "Your World" that Sondland "painted a picture" that described President Trump's overtures to Ukraine in a negative light.

"No one was able to shake [Sondland] of his central thesis -- and that was that everybody involved in this... was aware of the fact that the aid was being held up and now they know why," Napolitano said, mentioning former New York City Mayor Rudy Giuliani, Vice President Mike Pence and Secretary of State Mike Pompeo as among those who were informed about the situation.

The testimony of Sondland proves that "bribery" lies at the heart of the Ukraine impeachment probe and proves President Trump engaged in "potential high crimes and misdemeanors," according to House Intelligence Committee Chairman Adam Schiff, D-Calif.

CALIFORNIA DEMOCRAT DEFENDS ADAM SCHIFF TO CNN: HE HAS NO AGENDA

"It was the conditioning of official acts for something of great value to the president. These political investigations -- it goes right to the heart of the issue of bribery as well as other potential high crimes or misdemeanors.”

Napolitano went on to say, "The president is smart enough to operate as president as he did when he was here as a developer in New York City: Through intermediaries where the communication is, he believed, privileged."

However, Napolitano said Trump is not entitled to the same treatment in an impeachment proceeding that he would be in a criminal proceeding.

“I think there is probably a strong determination by an overwhelming majority of House Democrats to vote for impeachment but an insufficient number of Republicans to vote [for] conviction so this will die in the Senate," he said.