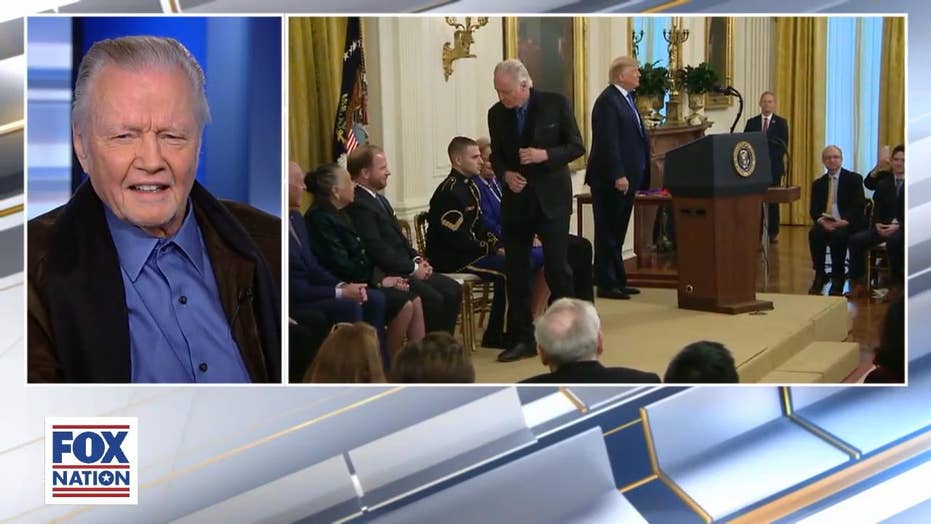 Jon Voight on why he broke out dancing on stage at the White House: 'I don't take myself that seriously'

Academy Award-winning actor Jon Voight had a reason for busting out the dance moves during a recent visit to the White House last month as President Trump awarded him the National Medal of Arts on stage.

"I was warned that you never could tell what [Trump] will do -- so just go with it," Voight recalled in a recent "Laura and Raymond" interview on Fox Nation.

As Trump began the ceremony honoring the Golden Globe winner, the theme song from Voight's 1969 film "Midnight Cowboy" began to play, and the actor seized the moment, jumping to his feet on the makeshift stage in the East Room as Trump turned to watch.

"He's playful," Voight said of the president, "and when he started playing the music, I don't know how many people identified that music as the 'Midnight Cowboy' music, but when... it played for some length..., I said 'Well I got to do something.'

"I got up. I didn't know quite what I was going to do, and then I did this kind of... little playful something...to embrace it. And certainly, it showed that I don't take myself that seriously," Voight added.

Jon Voight dances as President Donald Trump looks on during a National Medal of Arts and National Humanities Medal ceremony in the East Room of the White House, Thursday, Nov. 21, 2019, in Washington. (AP Photo/Alex Brandon)

Voight, an outspoken defender of the president, was one of four people honored with the National Medal of Arts at the November ceremony.

During his remarks, Trump called Voight a “great friend” and “one of America’s greatest living legends.”

The president also referred to Voight’s movie “The Champ” as “the greatest boxing movie of all time.”

“Everyone was crying at the end of the movie but I tried not to, John,” Trump said about the film. “We love having you here, especially since it happens to be somebody that I really like."

Voight has starred in dozens of feature films since the late 1960s, when he rose to prominence for his Oscar-nominated role in “Midnight Cowboy.” The father of actors Angelina Jolie and James Haven is also known for his roles in “Coming Home,” “Heat,” “The Rainmaker,” and “Ali.” More recently, he was seen in the “National Treasure” series, “Zoolander,” and “Four Christmases,” among others.

Now largely associated with President Trump, Voight was once an outspoken liberal in his early career, but it was during his role as a Vietnam war veteran in the 1978 film "Coming Home" that his views began to shift, he explained in the Fox Nation interview.

"I was turning at that time from being a liberal to being more conservative, but I hadn't made the full transition," said Voight.  "I was very shocked when we pulled out of Vietnam, the slaughter the communists delivered to Cambodia, Laos, and Vietnam...two and a half million people killed, murdered. So that was what began my thinking --  and the left just celebrated that as a victory. And I'm thinking, 'Oh, is that right?'

"And you're not paying any attention to all of this horror that was created with our pulling out," Voight continued.

In preparation for his role in the film, Voight visited a spinal cord injury facility where many Vietnam war veterans were sent to recover, and he discussed the "tremendous" responsibility he felt to properly portray their suffering to the American people.

"I went down there and spent nights in some of the rooms and heard the voices and...the moans of the people who had these injuries..."

"I went down there and spent nights in some of the rooms and heard the voices and some of the moans and stuff of the people who had these injuries.... and... their suffering was what I was forced to portray. And so I was wed to them. And I was trying to get this right for these guys," he said.

Commenting on the ire directed at the president from many in the Holywood community, Voight highlighted entertainer Madonna and actor Robert De Niro for their opposition to the president.

"I've been there," Voight said in an earlier interview, referencing his liberal beliefs in the 1960s. "Perhaps they'll come to an understanding that it's wrong."

To see the full interview, featuring Voight's take on his films, the impeachment probe and more, join Fox Nation and watch the latest episode of "Laura and Raymond" today.