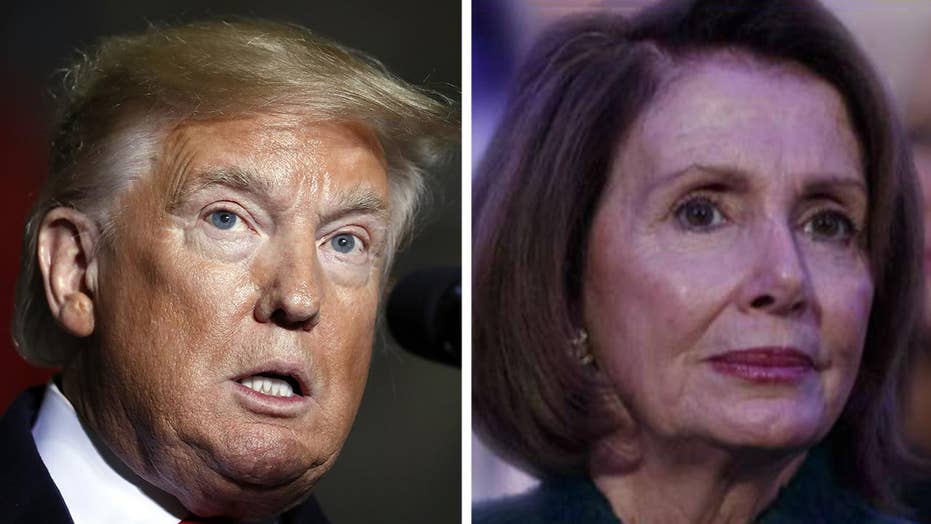 Speaker Nancy Pelosi refuses to send articles of impeachment for Senate trial; reaction and analysis on 'The Five.'

Jesse Watters responded to growing scrutiny of House Speaker Nancy Pelosi's decision to withhold the articles of impeachment from the Senate, after President Trump attacked her in a series of tweets early over the holiday.

"She wants the impeachment without the acquittal but she's not gonna get what she wants because eventually, this strategy is gonna run out of the road," Watters said on "The Five." "The only thing she's enjoying right now is watching Trump complain. If I were the president, I would stop, declare victory, I would say Nancy looks weak, she looks scared, she looks tired and eventually the articles will get kicked up and he'll get the acquittal he's looking for."

The president tore into House Democrats overnight and into the morning over their handling of the impeachment process, calling them "hypocrites" and "liars" for allegedly seeking concessions in the Senate that Republicans were not afforded in the House -- and for hitting pause on impeachment after stressing its national-security urgency.

“Crazy Nancy should clean up her filthy dirty District & help the homeless there," Trump tweeted. The president went so far Thursday morning as to suggest Pelosi, D-Calif., should face a primary challenge, writing "A primary for N?"

His comments come a day after he threatened California Gov. Gavin Newsom, a Democrat, with federal intervention if he were unable to resolve the homeless crisis in his state.

"Nancy Pelosi’s District in California has rapidly become one of the worst anywhere in the U.S. when it come to the homeless & crime. It has gotten so bad, so fast - she has lost total control and, along with her equally incompetent governor, Gavin Newsom, it is a very sad sight," Trump wrote in another tweet.

"He's attacking her as from a 'dirty district,'" Watters said. "I think it's effective because everybody can see the dirt in that district in San Francisco and it just reinforces the image of her as a hypocritical politician that cares more about the party than the people of the country."

Pelosi said she will not appoint impeachment managers who will represent the House during a Senate trial until the Senate determines the trial's process. Senate Majority Leader Mitch McConnell, R-Ky., has publicly rejected a demand from Minority Leader Chuck Schumer, D-N.Y., to subpoena additional documents and witnesses, claiming these fact-finding efforts were the House's job. McConnell has also claimed that he can't do anything until Pelosi sends over the impeachment articles, leaving the two chambers at an "impasse."

"I think the longer she delays, the worse it gets for [Democrats] because, remember, their argument was, this president is such a danger he must be removed for the good of the republic," Blakeman said in a Thursday morning interview.

"If [Pelosi] doesn't want to bring the charges to the Senate, then, in fact, he hasn't been impeached, because the impeachment process means that once the vote is taken in the House it must be filed in the Senate in order for the Senate to take up their responsibility."