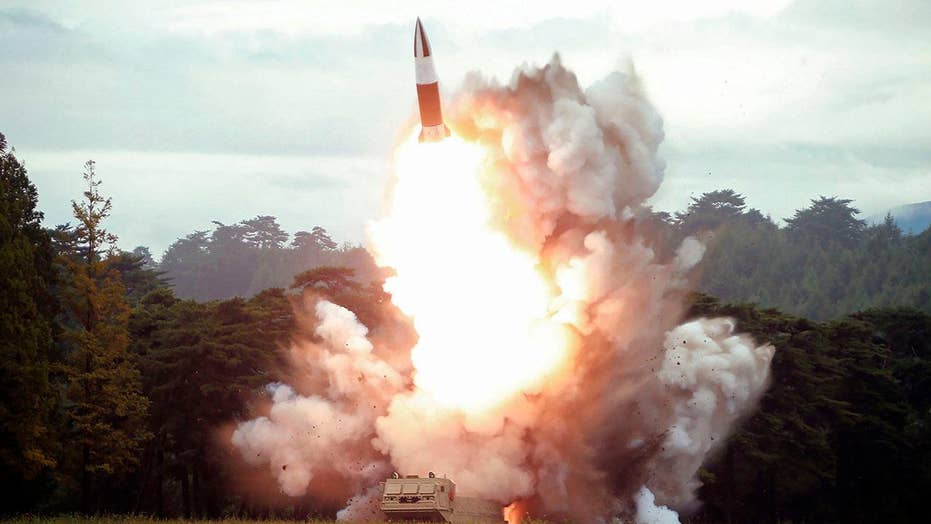 Asian affairs expert Gordon Chang praised President Trump's aggressive stance towards China, indicating that he likely won't make the same mistakes that previous administrations did in including the nation in negotiations with North Korea.

"There's a lot to criticize Trump on North Korea but the one thing he's done right is he's not played Beijing's game," Chang said during Thursday's "Hemmer Time" podcast.

Chang said that Trump departed from previous practice by pushing China "to the side" -- excluding them from the room during talks with the Hermit Kingdom.

"That's a good thing because over the course of our discussions with North Korea -- starting from 2003 and the six-party talks, the Chinese have generally been a malign influence."

Chang argued that when former President George W. Bush tried including China in talks, it resulted in a "very arrogant China and a nuked up North Korea."

His comments came after Pentagon officials reported that North Korea fired projectile missiles into the Sea of Japan, just the latest provocation as the Trump administration struggled to reach a denuclearization deal with the rogue nation.

Gordon Chang is author of "The Coming Collapse of China" and an expert on the nation. Chang believes that China may be using North Korean missile tests as a way to pressure Trump on trade.

The Chinese were "desperate" to influence relations between the United States and North Korea, Chang added. He told Fox News host Bill Hemmer that the Chinese were likely behind the missile tests and used it as a way of pushing Trump to back down from the intense trade pressure he's been imposing on their economy.

China has "consistently" been propping up North Korea by doing things like supplying mobile launchers for their missiles, according to Chang. "China has made North Korea a real military threat," he told Hemmer.

Trump, in August, appeared to offer an olive branch to North Korean leader Kim Jong Un when he tweeted that his nation had "unlimited" potential which Kim could unleash with the U.S.'s help.

Chang indicated that North Korea could in fact have a bright future as it had smart engineers but also had to deal with a regime that "purposefully prevented prosperity." But Trump's appeal to economic success, Chang said, likely turned off Kim who saw prosperity as a way to empower his people and encourage dissent.