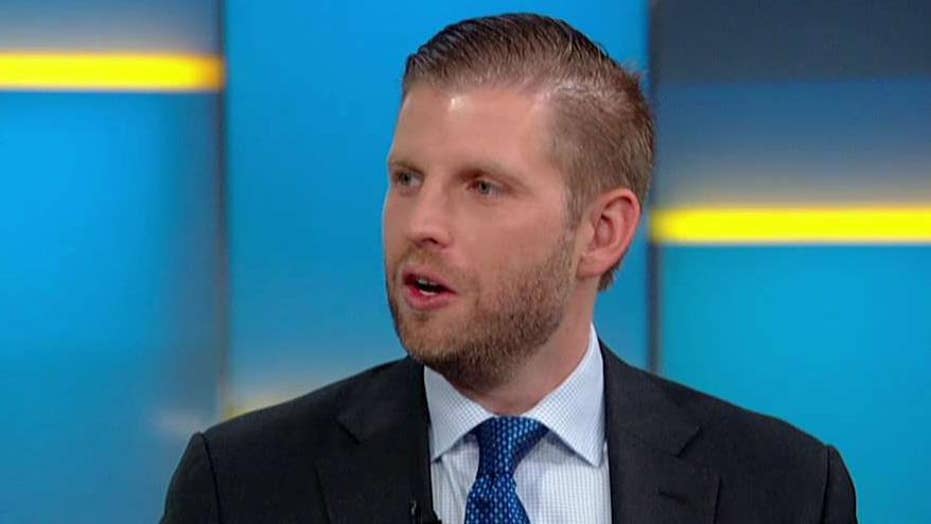 As 2020 Democrats stump in Iowa, Eric Trump claimed their policy proposals are akin to an "assault" on the American dream.&nbsp;

Eric Trump accused Democrats of a "full-out assault" on the American dream during an interview on "Fox & Friends" Wednesday and said they are looking to stifle competition to help push their radical political agenda.

"It's a full-out assault on the American dream from the left," Trump said. "We've seen this movie before and it doesn't play out well. We've seen it in France, right? Look how many real businesses are in France right now. You can't survive. The taxes and regulations are too high...They don't have proper industry and people aren't incentivized to work."

Trump cited Bill Clinton's implementation of NAFTA as one of the reasons America lost its competitive edge and said companies are being wooed away from the U.S. by other countries with less burdensome regulations and red tape.

"You could literally step on the other side of the U.S.-Mexico border, build a plant there, produce for much less and be much more competitive as a country," he said.

He also said the American people would prefer to be the arbiter of their own money instead of the federal government and said hard work should be celebrated and incentivized.

"[The government] can't patch a pothole, let alone manage your money," Trump said. "People... go to work. They work hard. They climb the corporate ladder. They do great. They provide for [their] families. They take their families to Disney World. That should be applauded. Why is that scorned? That should be applauded in this society."

The president's son reacted specifically to a new Wall Street Journal op-ed titled "Making Money Is a Patriotic Act." In the piece, former Home Depot co-founder Bernie Marcus and billionaire John Catsimatidis wrote that their "greatest hope for our country is that others have the opportunities we had."