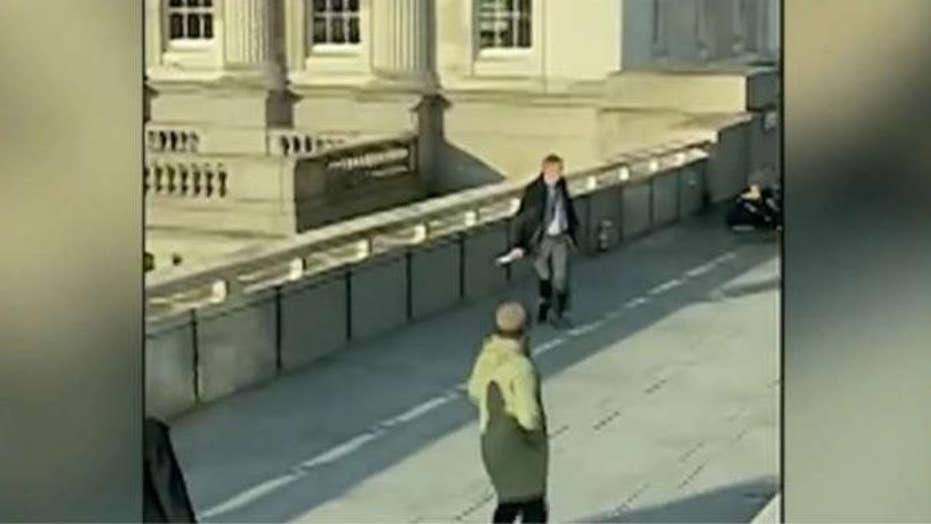 British Prime Minister Boris Johnson says it was a 'mistake' to release the London Bridge terrorist from prison; reaction from Ken Cuccinelli, acting deputy secretary of the Department of Homeland Security.

Acting Deputy Homeland Security Secretary Ken Cuccinelli contradicted a claim that he "retreated" from a bar in Washington, D.C., as former Maryland Gov. Martin O'Malley hurled expletives at him and attacked the Trump administration.

"I didn't leave there," Cuccinelli told Fox News host Charles Payne on Saturday. "He physically confronted me, and I walked by him but I found my classmates from Gonzaga in The Dubliner [pub] and had my Guinness and had another Guinness."

Cucinelli said that when he walked into The Dubliner, he heard "screaming and cursing" from a section of the bar. He initially ignored the outburst, but said he later turned around to see O'Malley, a Democrat, with his "veins bulging from his neck, screaming and yelling."

CUCCINELLI FIRES BACK AT O'MALLEY, CALLS BEHAVIOR 'SAD' AND 'SHOCKING'

That encounter reminded Cuccinelli of the kind of harassment that former White House press secretary Sarah Sanders and Sen. Ted Cruz, R-Texas, among other Republicans, have faced in public in recent years.

"So, you know, the juvenile behavior like Sarah Sanders suffered and Sen. Cruz, we're not succumbing to that. And this is a guy who thought he could be president," he said.

Republicans have faced public backlash over the administration's practice of separating families at the border. Rep. Maxine Waters, D-Calif., famously called on Americans to harass administration officials over the president's immigration policy.

During his "Cavuto Live" appearance on Saturday, Cuccinelli adamantly defended the administration's vetting policy, pointing to the terror attack in London on Friday.

"This kind of incident is exactly what we're trying to avoid in this country. We can never avoid 100 percent of them," he said.

"But the kind of defense that this president has put in place, unlike his predecessor, who was frankly inviting people in, for instance, massive numbers of Syrian refugees and so forth, that we're unvetted by relative standards of this administration."

He added that former President Obama's practices were posing a "great danger to the United States and to the people of this country."

"And that's not something President Trump has ever been willing to tolerate from the very beginning of taking his oath of office. And if executing that policy annoys some people, will that's what elections are about. I make no apologies for the president's, frankly, very successful immigration and vetting and homeland security policy."