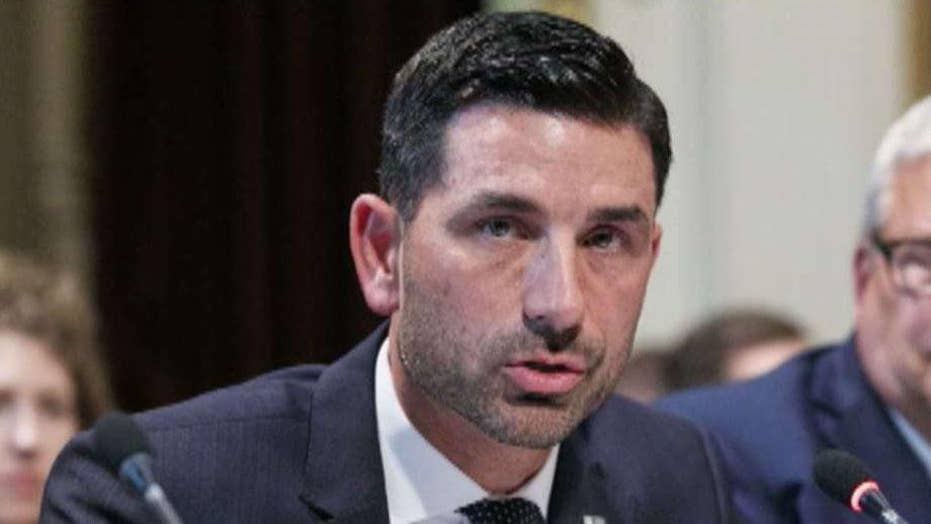 Chad Wolf was sworn in Wednesday as the new acting Homeland Security secretary, and announced that acting U.S. Citizenship and Immigration Services Director Ken Cuccinelli will serve as his deputy -- a move that is likely to be welcomed by supporters of tougher immigration measures.

“I am sincerely grateful to the president for his confidence in me to temporarily serve in this incredibly important position,” Wolf wrote in an email to staff that Fox News has obtained.

Wolf, who previously served as chief of staff to former DHS Secretary Kirstjen Nielsen, was sworn in hours after the Senate confirmed him as the first under secretary for policy, a role in which he will never serve but a necessary legal hurdle for him to take the top job in a temporary capacity. He replaces Kevin McAleenan, who took over from Nielsen in an acting capacity in April and submitted his resignation last month.

In his email, Wolf called McAleenan “one of the fiercest advocates for the department” and said that “his appreciation of the workforce and unyielding commitment to the mission was evident in all that he did.”

He also announced that Cuccinelli, one of the most vocal hardliners within the administration and someone who was flagged as a possible McAleenan successor, would be taking over as acting deputy secretary.

“Ken Cuccinelli has been a constant and vocal advocate for the men and women of the department who are protecting our borders and restoring integrity to our immigration system,” Wolf wrote. “As Virginia’s attorney general he led the state in its fight against human trafficking and record enforcement against gangs, fraud and child predators.”

In a statement on Wednesday, Cuccinelli said he was pleased to take the role at DHS. A USCIS spokesperson said Deputy Director Mark Koumans would now serve as acting director.

“I am pleased to be given the opportunity to continue to be a voice for the men and women of this department. With nearly a quarter of a million employees and a mission that ranges from border security and immigration enforcement to cybersecurity and emergency response, DHS is charged with some of the most critical work in government,” Cuccinelli said. “It’s been a privilege to lead the USCIS workforce these past months in faithfully administering our nation’s lawful immigration system and I look forward to continued collaboration with them.”

Cuccinelli, along with acting Customs and Border Protection (CBP) Commissioner Mark Morgan, had been one of the favorites among immigration hawks to lead the department. As acting director of USCIS, he had pushed a series of tough immigration measures including the “public charge” rule -- which would toughen up guidelines on whether immigrants likely to be reliant on welfare should be given green cards -- a move that horrified many Democrats and immigration activists.

He also had faced opposition from Senate Republicans unhappy with his prior leadership of the Senate Conservatives Fund -- a group seeking to pit sitting senators against more conservative primary challengers.

Groups in favor of a tough stance on illegal immigration and lower overall immigration numbers had backed Cuccinelli while expressing concern about Wolf. They had cited his past role as a lobbyist for companies that sought to protect the H-1B visa program.

RJ Hauman, head of government relations at the Federation for American Immigration Reform (FAIR), said he was cautiously optimistic about Wolf’s appointment, with that optimism reinforced by the Cuccinelli announcement.

“With Chad Wolf’s assistance, DHS has done one hell of a job on the illegal-immigration front over the past few months,” Hauman told Fox News. “However, there is still much to be done when it comes to protecting American workers through the issuance of administrative rules.”

“As new acting head of DHS, Wolf must never reward the business lobby’s intentional disregard of American workers to maximize profits,” Hauman said. “We’ll be engaged and the American people will be watching.”

Some members of the administration had given Wolf a glowing recommendation. A senior administration official told Fox News last month he was a “tremendous asset” to DHS and to the president’s agenda.

“He’s widely recognized as a trusted, committed and aggressive leader, credited with helping implement the policies developed to address the border crisis,” the official said. “His expertise is wrapped around the entire department and its many issue areas, from counterterrorism to election security. Hands down the most qualified.”

Democrats, however, criticized Wolf’s appointment from the other direction, accusing him of being behind some of what they called the Trump administration’s most inhumane immigration policies in his previous work in DHS.

“By confirming Chad Wolf, the @SenateGOP has rewarded a man who has stood by @realDonaldTrump’s most immoral and anti-American policies: family separation, the Muslim ban, and the unlawful national emergency declaration,” Rep. Veronica Escobar, D-Texas, tweeted. “He should have no place in our government.”

Wolf’s appointment came as the Trump administration, despite a lack of permanent leadership at the top of DHS, has scored a series of wins in the fight against the migrant crisis at the southern border.

In particular, it has seen border apprehensions plummet by more than 65 percent since May, as it has tightened asylum policies, built more infrastructure at the border and secured a series of agreements with countries such as Mexico and El Salvador to crack down on migrant flows.

Wolf referred to those implementations in his email to staff.

“DHS, especially the men and women on the front lines of the crisis, has been successful in confronting this challenge and changing the dynamics at the border. But we must stay vigilant and steadfast in order to stay ahead of the threats and restore integrity to our immigration system,” he wrote.

He also reminded staff that “we must also not lose sight of the other threats facing the homeland – from preparing for and responding to natural disasters, to protecting victims of trafficking and exploitation, to sharpening our counterterrorism mission and the rising threat of domestic terrorism, to securing the upcoming 2020 elections – the Department must remain positioned and poised to confront an array of threats every day.”