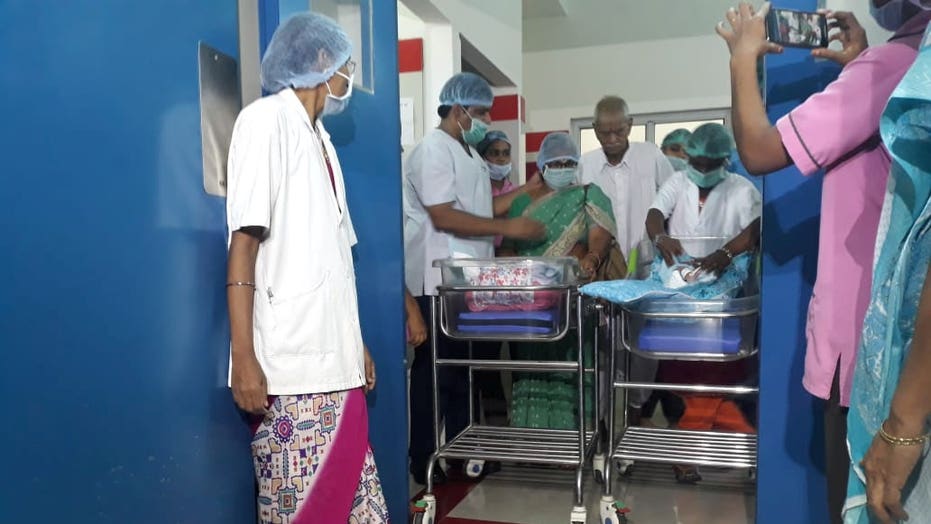 A 74-year-old woman now holds the record for “world’s oldest mom” after she reportedly gave birth to twins on Thursday following a round of in vitro fertilization using donor eggs. The woman, identified as Erramatti Mangayamma, and her husband, 80-year-old Rajarao, hail from a small Indian village in the Eastern Godavari district, SWNS reported.

The couple welcomed two girls after undergoing one round of IVF in January, her doctor claims, ending their 60-year wait to be parents. Mangayamma’s alleged feat surpasses that of 70-year-old Daljinder Kaur, who previously held the record for oldest recorded age at birth, SWNS reported.

The couple’s daughters were born via C-section, with doctors reporting no complications.

The girls were born healthy and each weighs around 4.4 pounds, hospital staff said. (SWNS)

“It was smooth, as there were no health complications,” Dr. Umasankar, of the Ahalya Hospital, told SWNS. “Each baby is weighing approximately 2 kgs (4.4 pounds) and both babies are healthy.”

Mangayamma’s doctor does not predict any major issues for his patient.

“I don’t think she will have any major health issues in the post-delivery period,” he told SWNS.

The couple allegedly underwent one round of IVF in January.

This spring, a 61-year-old woman from Nebraska made headlines when she gave birth to her own granddaughter through IVF after acting as a surrogate for her son and his husband. Cecile Eledge had acted as a surrogate for Matthew Eledge and Elliot Dougherty, using a donated egg from Doughtery’s sister and Eledge’s sperm.

She gave birth to a healthy baby girl named Uma Louise Dougherty-Eledge in March. At the time, her doctor said age was not a factor due to her outstanding health.

“She has the body of a 40-year-old and is actually in better shape than some 20-year-olds,” Dr. Carolyn Maud Doherty, the family’s reproductive endocrinologist, told PEOPLE at the time. “I’m pretty conservative about these sorts of things but Cecile really turned out to be their best option. She’s genetically blessed.”