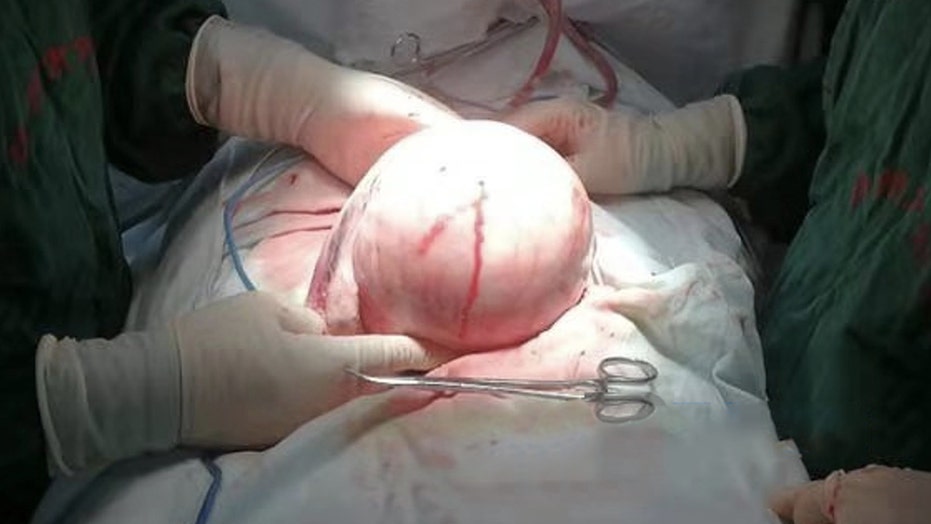 A Chinese woman whose friends thought she might be pregnant due to her swollen abdomen and sudden weight gain recently had a 6-inch, 3-pound growth removed from her uterus. The woman, identified as “Ms. Shi,” said she checked into Yangzhou Maternity and Child Health Care Hospital last month for her symptoms, which included heavy menstrual periods and dizziness.

The woman had experienced heavy bleeding and weight gain over the last several months. (AsiaWire)

“I gained weight and everyone thought I was pregnant,” the 38-year-old told AsiaWire.

An examination and scans revealed a ball-shaped growth taking up space in her uterus, which was causing the swelling and her other symptoms.

“The tumor was so big it made her seem like she was five or six months pregnant,” Dr. Huang JingBing told AsiaWire. “It was about [6 inches] across, and weighed over [3 pounds].”

She said her friends assumed she was pregnant, but it wasn't until she started experiencing dizziness that she sought medical attention. (AsiaWire)

Huang and his team removed the mass and said Shi should not experience any long-term complications.

While unusual, uterine fibroids are noncancerous growths in the uterus that range in size and can distort or enlarge the uterus. Symptoms may include heavy menstrual bleeding, longer menstrual periods, pelvic pressure, frequent urination, difficulty emptying bladder, constipation, and backache or leg pain, according to the Mayo Clinic.

Ovarian tumors are the result of abnormal cell growth. Benign tumors are slow-growing and do not spread to other parts of the body, but their exact cause is not always known, according to the University of Colorado’s department of gynecologic oncology. Treatment typically involves surgical removal, and fertility is often unaffected, although most commonly occur in women of childbearing age.