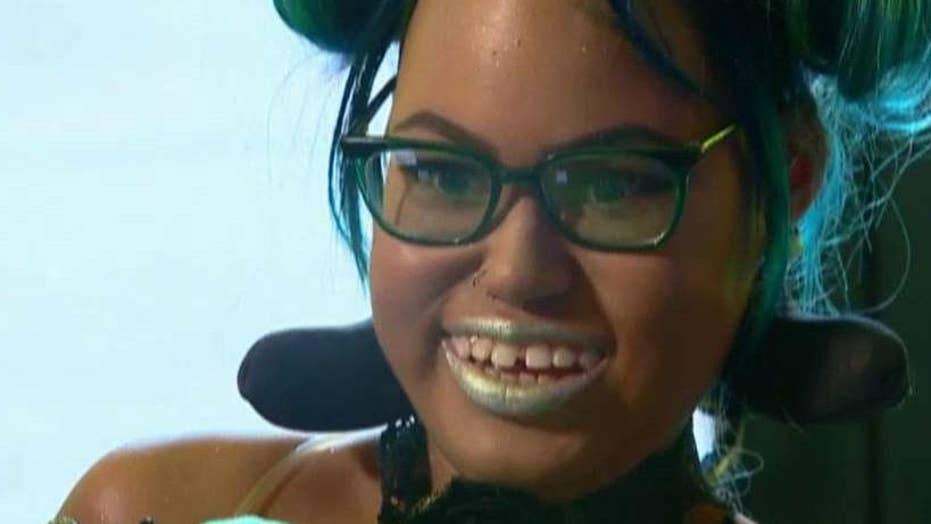 At 14 years old,  a typical American girl might be thinking about school, hanging out with friends, and going on dates, but an Appleton, Wisconsin teenager is focused on something very different. Jerika Bolen wants to die.

Jerika was born with a rare incurable disease called spinal muscular atrophy type 2.  She has almost no control of her muscles and requires a wheelchair to get around. She's undergone 30 surgeries so far, she said she's in pain every single day and doesn't want to continue to live that way.

"I said, 'Jerika I love you that much that I will not let you suffer if it's that bad,'" Jennifer told WLUK-TV.

Jerika wants to go into hospice care, turn off the device that helps her breathe and let her life slip away.

In July, friends and family threw a prom-like party for the teen called "Jerika's Last Dance."

"It makes my heart explode!  It's so crazy that people want to come for little old me!" Jerika told WLUK-TV.

Her story has gained attention and evoked strong emotions nationwide, with supporters saying that the girl has a right to decide what to do with her own life, and while others are outraged that a child would be making such a heartbreaking choice.

"She's only 14 and we know that the brain is not fully matured," Carrie Ann Lucas, founder and executive director of the Colorado-based Disabled Parents Rights, told Fox News. The group is asking Wisconsin's Department of Children and Families to intervene in the girl's case.

Lucas, who has a form of multiple sclerosis and is reliant on a ventilator, doesn't believe the disease Jerika suffers from is imminently fatal. She also believes Jerika may be in pain because she isn't getting the medical care she needs.  If a doctor can help ease the pain, Lucas thinks Jerika might have a better quality of life.

Lucas said she also fears Jerika's decision to end her life might have been formed from the negative way disabled people are portrayed on TV or in movies.

"We very often see our lives devalued… not being dignified and really that we're in many ways better off dead than disabled," she said.

Wisconsin law is murky on how to handle Jerika Bolen's situation.

As a minor, Jerika is legally considered to be "incompetent" by the state.  Her mother's support might make a difference, however. According to a Wisconsin court ruling on the 2014 case of Disability Rights vs. University of Wisconsin Hospital and Clinic, "…in the absence of a persistent vegetative state, the right of a parent to withhold life sustaining treatment from a child does not exist."

According to Wisconsin attorney Kristen Scheuerman told Fox News, "In the absence of any litigation, it's a moral question with legal implications because if a mom or someone else acts there could be potentially legal consequences to those choices."

Many of those who live near Jerika's hometown of Appleton are defending her right to choose how to handle her life.

"She's in a body that's nearly paralyzed and painful all the time," Alton Olson, who was hired as the DJ for "Jerika's Last Dance" told Fox News. "Think about how you would feel."

Initially Jerika said she wanted to enter hospice by the end of the summer.  Since the prom in July, Jerika and her mother have mostly remained silent and behind closed doors, avoiding the media attention.

Jerika's last public comments have left her friends and supporters with a heavy heart.

"In your life you need to like yourself…because for a while, probably up until I decided (to end her life) I didn't like myself,” Jerika told WLUK-TV. “…but then I realized this is the end and you've got to make it the best."