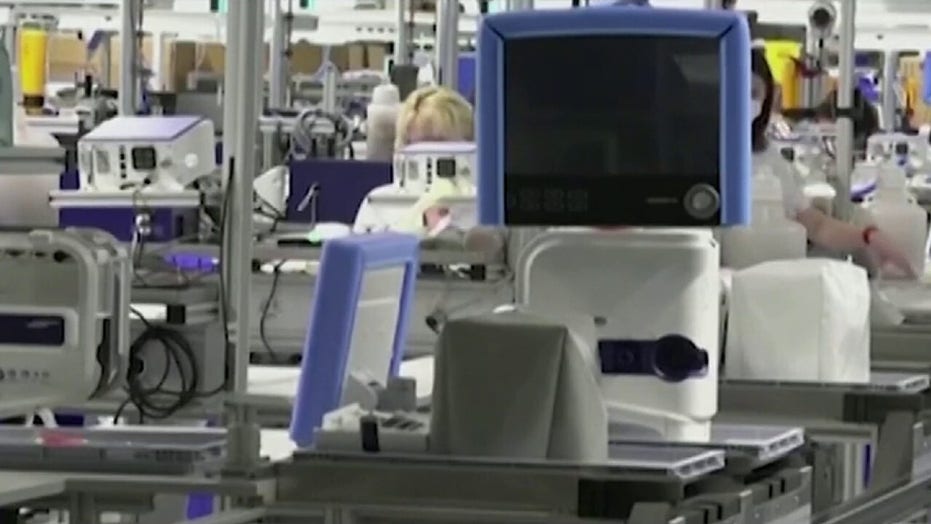 Thousands of ventilators from the U.S. stockpile are not operational, reports say; CEO of American Association for Respiratory Care, Tom Kallstrom weighs in on ‘America’s Newsroom.’

It's the most heartwrenching decision any medical professional on the front lines could make: deciding who to save and who to let die.

As coronavirus, officially called COVID-19, attacks across the globe – amid a vast shortage of life-saving devices – it's a decision more and more doctors every day are being forced to wrestle with, and that could increase if the rationing of ventilators becomes unavoidable.

"Doctors have always exercised some sort of deliberation upon whether medical resources can be beneficial for patients, (and) whether patients can become better through the use of a ventilator," Dr. Holly Wilson, a professor at Louisiana State University Online who specializes in bioethics and medical ethics, told Fox News. "Sometimes, doctors have to consider a medical intervention to be medically futile. It is at that point that the hospital ethics committee steps in and helps make the decision because often the family or surrogate does not agree."

But amid this pandemic, the surrogate and family are often not able to stand by during their loved one's dying days.

"And for that reason, even more, a triage committee or an ethics committee should be involved," Wilson observed. "Doctors should not be overly stressed by having to make a decision that could mean the death of a patient."

France is evacuating 36 patients infected with the coronavirus from the Paris region onboard two medicalized high-speed TGV trains. (Thomas Samson, Pool via AP)

As of Thursday, there were more than 235,200 confirmed cases of COVID-19 in the U.S., and over 5,620 people have already succumbed to the deadly illness.

New York, which remains the national epicenter of the novel contagion, is weathering the brunt – some 40 percent of all cases nationwide. The state has already lost more than 2,370 residents, with the number of cases not expected to peak for at least another two weeks.

Gov. Andrew Cuomo has desperately underscored the dire shortage of ventilators as the caseload swells, noting that the virus has rendered many in need of the breathing machine for up to 30 days.

The email, crafted by the head of the department of emergency medicine, Dr. Robert Femia, painfully illuminated the problematic decisions doctors have ahead of them.

"In emergency medicine, we do not have the luxury of time, data or committees to help with our critical triage decisions," he wrote, as cited by the Wall Street Journal. "Senior hospital leadership recognizes this and supports us to use our best clinical judgment."

A body wrapped in plastic is loaded onto a refrigerated container truck used as a temporary morgue by medical workers wearing personal protective equipment due to COVID-19 concerns at Brooklyn Hospital Center in the Brooklyn borough of New York.  (AP Photo/John Minchillo)

In New York, the state's Department of Health has guidelines, which were instituted in 2015,  and require the federal government to declare a public health emergency.

Ultimately, physicians are having to choose who has a better chance of making it and turning the attention to them, similar to the scenes of torment and tragedy in an overwhelmed Italy last month. Sometimes, that entails choosing a younger person over an older one, or a person with a relatively healthy history over someone who has already battled and survived the likes of cancer.

"There are different principles. There is the principle of prioritizing those who have the ability to perform a task that is deemed essential to society; and maximizing life years – that is how many years will a patient be expected to have if they survive," Wilson said. "(As well as) the life cycle principle – giving those an opportunity to pass through life's stages, which gives priority to young people but discriminates against those who are older."

CORONAVIRUS' FRIGHTENING PROFILE: WHO IS MORE LIKELY TO DIE FROM COVID-19?

She also stressed that another prominent factor is "prioritizing those who are most likely to survive and benefit in the short term by intubation of a ventilator," which is generally considered to be "the least unfair principle."

"These do not have to compete but can be used by a hospital ethics committee, or triage officer. However, all of them have problems and are unjust ways to distribute health care.  That is why mitigation is so important," Wilson said.

And according to Dr. Lisa Moreno-Walton, president-elect of the American Academy of Emergency Medicine and director of the division of research, division and diversity in Emergency Medicine at Louisiana State University, "discretion in the allocation of scarce medical resources is something that is practiced routinely in third world countries."

"Those of us who have worked in global health are familiar with the decisions that had to be made in Africa during the Ebola epidemic," she said. "If I have one ventilator and two people who need it, and one is a 13-year-old-boy who is likely to recover, and the other is an 80-year-old woman who is demented and has sacral decubiti, who do I intubate and put on the ventilator? In that case, the decision is made on the likelihood of recovery and quality of life."

"Both have no commodities. Both are equally likely to recover. How do we make that decision?" Moreno-Walton continued. "We are then being asked to decide whose life has more value, and that decision will not be the same for everyone. We are now entering the realm of decision-making based on morality and personal values, and that is a dangerous place to go."

CORONAVIRUS SICKENING YOUNG ADULTS, CHILDREN: WE ARE LEARNING 'THAT EVERYONE IS AT RISK'

There are no formal federal and state guidelines.

"And there should not be," Moreno-Walton said. "The predictive model can be very different for different diseases, and physicians need to decide based on each disease and each prognostic factor based on what is currently known about each specific disease and its course."

However, an array of public and private entities are fighting to make, source and donate as many ventilators to the most in need pockets of the country. For one, Tesla founder Elon Musk has pledged hundreds of ventilators to be donated to New York, with the first shipment to arrive this week.

President Trump has sliced through red tape and authorized car manufacturers to take on the ventilator-making task. The Federal Drug Administration (FDA) has also approved the emergency use of contraptions that can be modified into ventilators, enabling anesthesia gas machines and positive pressure breathing devices to be altered for use as ventilators.

This photo provided by Southwest Airlines employee Dayartra Etheridge shows health care workers, other passengers and flight crew aboard a Southwest flight from Atlanta to New York's LaGuardia Airport holding their hands in the shape of a heart, before the plane pushed back from the gate, at Hartsfield-Jackson Atlanta International Airport.  (Dayartra Etheridge via AP)

And the Pentagon this week sealed an $84.4 million deal with an array of enterprises, which includes the delivery of 1,400 ventilators by May.

Furthermore, medical professionals and lawmakers lament that it is a race against the clock. For too many Americans, weeks will be too late. And with an adequate supply of ventilators in strained systems across the U.S., many hard-hit areas such as New York could face a grim shortage of health care workers trained to use them and perform the typical 24/7, standard of care duty required.

One Mississippi-based emergency room doctor, who was not authorized to speak on-the-record, told Fox News that they have no concern about a ventilator shortage, but instead, there is a legitimate worry that they simply do not have enough nurses to operate them.

In addition to the painful and looming shortage of ventilators, medical-centered website STAT pointed out that there are indicators that medicines – including muscle relaxants, painkillers, anesthetics and sedatives – needed for patients on ventilators are running dry.

Dr. Ben Wedro, a Wisconsin-based emergency room physican, affirmed that over the past week, they have indeed addressed the issue of potential equipment shortage, specifically ventilators.

"We are well stocked with all equipment, including ventilators, so this situation has not occurred. That said, the process to withhold or withdraw ventilator management at our institution involves more than the emergency physician and would be similar to any terminally ill patient that presented to our department for care," he explained. "If the equipment were scarce, and an emergency physician felt that a patient should not be intubated, a critical response team would consult at the bedside to review any decision to withhold care."

"In that way, there is an independent arbiter panel, and the decision is not left to one physician in crisis," he added. "A palliative care consultation would immediately occur for those not ventilated to provide comfort measures and to alleviate suffering."